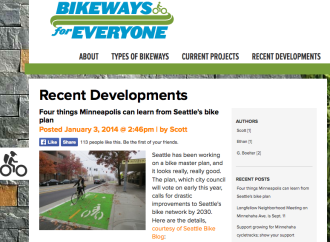 Minneapolis and Hennepin County are reworking their bike plans, and Bikeways for Everyone has been following Seattle’s Bike Master Plan development for ways to “draw lessons from Seattle’s achievements.”

Of course, Seattle’s bike plan has not yet been approved by the City Council. Though it sailed through a public hearing with overwhelming support for all but a couple miles of planned bike lanes in December, there are still detractors. The Council will likely take up the plan soon. Stay tuned.

This entry was posted in news and tagged 2013 bike master plan update, bikeways for everyone, minneapolis. Bookmark the permalink.