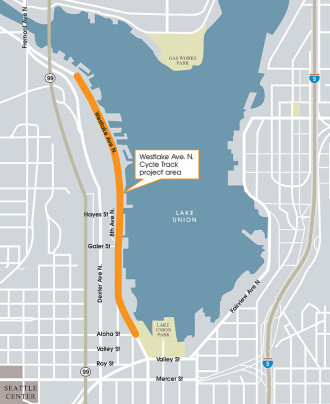 The city is holding an open house Monday to discuss plans for a cycle track on Westlake Ave N between the Fremont Bridge and South Lake Union.

Backed by grant funding, the project is entering the early design phase, and they need your input on what you’d like to see.

The open house runs from 5–7 p.m. Monday at B.F. Day Elementary School in Fremont. The presentation starts at 5:30.

If everything goes according to schedule, a safe bikeway could be installed in 2015.

Even with a recently redesigned Dexter Ave nearby, the Westlake parking lot remains a very popular cycling route. Unfortunately, because there is no cycling specific infrastructure, traversing the parking lots can lead to dangerous situations and frustrating conflicts.

Others choose to ride on the street instead, but that can also prove to be dangerous.

The city has made a commitment to retain four lanes on the street at least until the completion of the Alaskan Way tunnel. Westlake is a designated Major Truck Street that carries nearly 24,000 vehicles per day.

Therefore, it is likely that the city will be mostly focused on redesigning the giant city-owned parking lot that runs the full length of the lake. Because parking in the lot is free, it is often used as an unofficial park-and-ride for savvy commuters looking to avoid paying downtown rates.

So is there room in the parking lot for a safe bikeway? Yes. Quite a bit:

To put 150 feet of right-of-way into perspective, that’s as wide as a runway at a major international airport. The city could pave the whole thing and land a 737 there. There is plenty of room for freight mobility, parking and a safe bikeway.

Westlake is also a possible future streetcar corridor as part of the Ballard to Downtown High Capacity Transit Planning Study, so work on the bikeway will need keep that in mind during design.

The problems of biking through the parking lot are well known to anyone who has ever biked through it. Because there is no clear good option, people choose all sorts of different strategies to navigate through. Some use the sidewalks near storefronts, some ride in the middle of the parking lot, and some take the busy street. None of these options is safe, and the unpredictability is annoying to everyone, on or off a bike.

There is a group of people who have organized to oppose the bikeway plans, going as far as holding a fundraiser for Ed Murray. One business even posted an electronic sign on the road that reads: “Wake Up America. Murray for Mayor. Save Westlake Parking.” Really.

Ed Murray has said that he supports the Westlake cycle track project, telling Publicola, “I support cycle tracks. I used them in Europe. If they think I am opposed, then they’ll be surprised.”

I hope that project opponents change their stance of “no way, no how” and instead come to the table. This is the kind of investment in the corridor that could be a huge boon for businesses and residences along the lake. And if parking concerns are heard, there are very likely options for addressing those needs without maintaining a dangerous situation for people on bikes.

More details on the meeting from SDOT:

The first public open house to kick off design of the Westlake Cycle Track is set for October 28, 2013. Come learn about the process and meet the project team. Share your comments and concerns to help develop a cycle track concept and route alternatives. There will be a formal presentation at 5:30 p.m. and an open house format for the duration of the public meeting, offering multiple opportunities to share your feedback.

Founder and Editor of Seattle Bike Blog.
View all posts by Tom Fucoloro →
This entry was posted in news and tagged meetings, westlake, westlake cycle track. Bookmark the permalink.