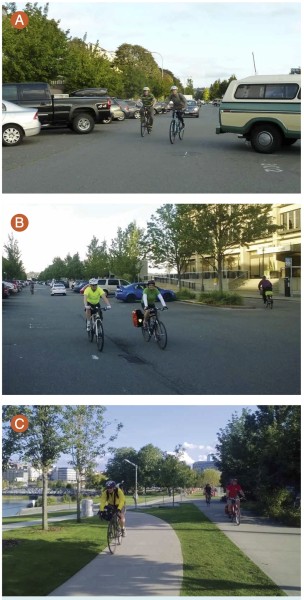 The parking lot is simply not safe for the high number of people who bike along Westlake today.

With the help of a regional transportation grant, the city is in the early stages of planning a bikeway of some kind along the wide Westlake Ave N corridor. So far, the city has held one open house to gather ideas and feedback from all community members to help guide the design process. 81 percent of those who attended noted that reducing bicycle collisions should be a project priority.

There is no design yet, no details on how much — if any — parking would be displaced or how the bikeway would look and feel. But a handful of people are so mad about the idea that the city is even thinking about creating a safer Westlake Ave N for people biking that they have hired a legal team to delay the entire city-wide Bike Master Plan.

The Bike Master Plan has been in development since 2012, has gone through thousands of hours of community feedback, drew overwhelming support at a public hearing in December and is one City Council vote away from approval.

Well, it was one Council vote away, anyway. A crew of Westlake businesses and individuals hired Josh Brower — the attorney who has been successfully delaying the Ballard Missing Link of the Burke-Gilman Trail for many years — and have filed an appeal to the city’s determination that the Bike Master Plan does not pose a significant environmental impact. Unless the appeal is dropped, the Council will not likely vote on the plan before the scheduled March 5 hearing.

Why are they appealing, you ask? Because passing a bird’s-eye master plan that includes a desire for a protected bikeway of some kind, somewhere within the 150-foot corridor “will create unsafe conflicts between pedestrians, cyclists, and commercial/industrial/maritime/business traffic and activities; will create traffic and safety hazards in and around the City and Westlake Avenue North area and neighborhood; will cause loss of parking that is significant and adverse to City residents, business owners/operators and the Appellants,” according to the appeal filed with the Seattle Hearing Examiner. “The Appellants are … harmed by the significant adverse impacts from the Plan and the failure of the DNS to comply with the State Environmental Policy Act and its implementing regulations.”

Yes, the city just thinking about putting a protected bikeway on Westlake “harms” the appellants.

Yes, there is enough space on Westlake for both parking AND a safe place to bike

The Bike Plan consists of 473.5 miles of new and upgraded bike facilities. The plan is a high-level document meant to guide city investments to increase road safety and to make bicycling more inviting to more residents regardless of age, ability, race, neighborhood or income. Westlake represents about 0.3 percent of the plan.

But that’s not the most outrageous part of this appeal. The Westlake project received funding independently of the Bike Master Plan. In essence, all the Master Plan says is: “Hey, there should probably be a separated bikeway of some kind here.” It’s a document that helps the city decide which projects to look into further. But Westlake has already been chosen. If the appellants have a beef with the project, then their beef is with the project team, not the Bike Master Plan.

So basically, this handful of people are so mad about this one project — the goals of which have overwhelming community support — that they are willing to hold the entire city-wide Master Plan hostage. They are willing to hold hostage all those thousands of hours invested by residents in neighborhoods in all corners of the city either because they are confused about the role the Master Plan plays in that project or because they want to flex their legal muscle to show how serious they are.

So who are these angry, well-funded appellants? From the appeal:

The fact that they are calling themselves “The Westlake Stakeholders Group” (website) is insulting enough, considering their intended goal is clearly not in the best of interest of the people who have been, or will be, injured while biking in the dangerous parking lot or four-lane road. Is Karlyn Beer not a “stakeholder” too? What about the people who live and work on Westlake and are excited about the idea of a safe and comfortable space to bike?

Do you bike, walk, live, work or play along Westlake Ave North? Then you are a stakeholder and may want to attend the January 21 “Westlake Stakeholders Campaign Kickoff.”

We were hopeful that people concerned about Westlake would engage in the planning process. Their concerns should obviously be part of the plan for a safer, more accessible Westlake corridor, neighborhood and business district. We all want Westlake businesses to do well, and we all want everyone to get around safely. We absolutely can work together to make that happen.

But these legal tactics, which now threaten to stall the entire bike plan for an unknown period of time, are despicable and show no intention of acting in good faith to create a safer Westlake. It’s frustrating to everyone who attended the open house, listened to concerns voiced there and tried to find common ground and compromises. I heard countless conversations after that open house like, “Hey, would back-in angled parking work? It takes up less space but still holds many cars.” “Maybe changing more unlimited free parking to 2-hour parking would cut down on people using the lot as a free park-and-ride, thus opening the parking to customers.” “Let’s make sure loading zones are preserved for businesses that need them.” “Let’s create better accessible parking for people with mobility issues.” And so on. These are the voices that should be leading the Westlake design process.

We urge the Westlake Stakeholders Group to come back to the table. To do that, they have to drop this appeal. Instead, they should spend their efforts working with the Westlake project team and the 81 percent of people who attended the project open house and said they want to improve safety for people on bikes. We can work together to create plans for a Westlake that works better for everyone, but not if one handful of the stakeholders decides to flex their legal muscle at every turn.

Below are the appeal documents.

UPDATE: Councilmember Tom Rasmussen, Chair of the Transportation Committee, said via email that he “was in the process of developing a schedule for review and action on the BMP” when the appeal was filed. He was able to find a thin silver lining in the delay, though. From an email:

What that means for the public is that there may be at least a month to provide comments to the City Council.  I would recommend that all who want to comment on the BMP get them in to the City Council within the next 30 days because we will want to have time to review the recommendations.  Once we receive the go-ahead to proceed with deliberations and adoption of the BMP update we will do so in a timely manner.

Comments can be sent to [email protected] or directly to members of the City Council.