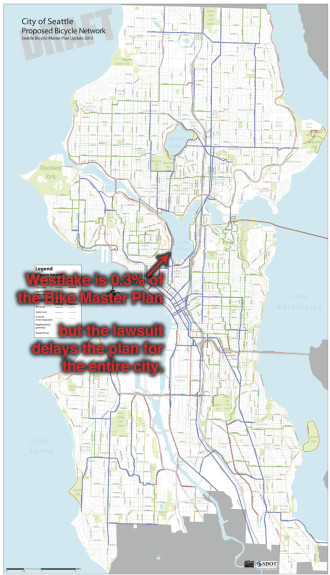 The handful of angry people who have lawyered up to delay the entire city-wide Bike Master Plan are already seeking to delay the process even further. Their reason?

Too many people participated in crafting the Bike Master Plan.

Yes, it’s true. So many Seattle residents attended public meetings, hearings and submitted comments online in various forms that the legal team says they need until May to get digest it all. From a motion by Josh Brower, attorney for the Westlake appellants (see all filed documents related to the case here):

SDOT conducted a number of public outreach meetings, gathered comments and worked with numerous consultants in the research, drafting and completion of the proposed Plan. Obtaining and digesting all of this will take weeks if not a month or more. Under the current schedule, Appellants have approximately seven (7) weeks to do so. Even if the Appellants could timely obtain information from SDOT, which, based on past experience, is unlikely, seven (7) weeks is simply not enough time to gather and digest the mountain of information related to the Plan.

As of now, the original schedule of a pre-hearing January 15 and full hearing March 5 is still noted on the case website.

Brower is not to be underestimated. This is the same attorney who has been delaying the Burke-Gilman Trail Missing Link in Ballard for years. Here, he has turned the fact that the Bike Master Plan had such a successful public outreach campaign into a reason to delay city approval. It’s the work of a true artist.

If you live, work, travel or play on Westlake and would like to have a say as part of the Westlake Stakeholders Group, then you are invited to attend an upcoming meeting. Oh wait! No, you probably aren’t invited anymore.

After the public started signing up for their January 21 kickoff community meeting, organizers cancelled the meeting and took down the Evite page. Instead, they have turned it into a “private Westlake Community Meeting” from 5–7 p.m. at China Harbor, and you must provide a home address on Westlake Ave N, evidence you are a business owner or the slip number for your livaboard boat or yacht in order to attend.

Never heard of a “private” community meeting before? Me neither. If you can’t allow the public to attend your community meeting, might that be a sign that your group has lost all ability to claim you represent the community?

Or here’s another question for the so-called Westlake Stakeholders Group: Why does a person who owns a slip for their yacht count as a community member, but someone who bikes, walks, dines or shops along Westlake does not count?

Will you be editing the information on your website and outreach materials to reflect this narrowed definition of who is part of your group?

Have you been misled by Westlake organizers?

Are you a Westlake resident, employee, boat owner or business owner who has heard claims that the city is going to remove “half” of the parking on Westlake? Then you have either been lied to or were listening to someone who is confused.

Unlike language repeatedly thrown around by a couple of angry organizers, there are no specific plans for how the city will make Westlake safer for people biking and walking through the area. There is no idea yet how many — if any — parking spaces will be removed or how any such removal will be mitigated to continue serving residents, businesses and customers.

What we do know is that 92 percent of people who attended an open house about the Westlake bikeway plans said making the area safer for people biking is “important” or “very important.” That includes Westlake community members who also had concerns about parking. Nearly everyone wants the same things for Westlake: Safety for everyone and access to support homes and businesses. We can achieve both goals.

The city is in the early phases of design, and they need to hear your input about how community members use the area so a design can be reached that meets the needs of as many people as possible. The next step is for the city to dig through community feedback and come forward with a bunch of different design ideas. From there, more feedback will be gathered to guide which option they choose to move forward with. The city needs an active community group gathering this information and staying engaged so the final design can be effective.

We don’t need a sue-happy group that is willing to waste private and city money to delay a marginally-related bike plan that will have essentially no impact on the Westlake project. You, community member, should know that this lawsuit has almost nothing to do with the Westlake bikeway. It is a lawsuit to stop the entire city-wide plan, of which Westlake represents about 0.3 percent.

The Westlake bikeway project has design funding and is now operating independently of the Bike Master Plan, which is really just a bird’s-eye planning document. If you want to influence the Westlake project, get involved in the Westlake planning process. If you want to make people in every Seattle neighborhood angry and delay implementing a guiding document with comments and work from thousands of people behind it, then appeal the Bike Master Plan. If you prefer the former, I highly suggest you let the Westlake Stakeholders Group know.

End this charade and come back to the table

Look, Westlake Stakeholders, let’s end this now. Drop this obviously misguided appeal to a city-wide community plan for safer streets. This plan is far bigger than Westlake, which is why you look so silly lawyering up and standing in its way.

What you’re doing represents the worst that public process has to offer. You are using legal power that not everybody has access to in order to delay a road safety plan that was crafted based on thousands of hours and comments volunteered by everyday residents who thought it was important to help make the streets where they live and work safer. Instead of trying to have an open conversation with the public, you are trying to use money and legal power to go over everyone else’s head, and you don’t seem to care who you step on in the process.

When neighbors of NE 65th Street were upset about a planned protected bike lane on that street, the city delayed releasing the plan to hold a series of public meetings to address those issues. After hours of public testimony, neighborhood walks and of tons of comments from people who live, work, play or travel through the area, the city came up with a series of alternative options. People again weighed in and eventually a compromise solution was selected. That is the option that is in the plan today. It didn’t make every single person happy (some neighbors and some people who bike found issue with it), but it does its best to meet the goals of the bike plan while also avoiding the most difficult-to-mitigate parts of the street.

This is how the public process is supposed to function. That public process was hard and involved a lot of heated arguments and comments. But it developed a result that can work.

What the NE 65th neighbors didn’t do was file a lawsuit and hold a bunch of closed room meetings. Things happened in the open. It was hard and ugly at times, but that’s how people find common ground sometimes. We’re all in this city together.

You run the risk of losing your political voice in the process. Nobody respects a backroom group who is willing to use legal strong-arming to get their way. But people do respect an organized community voice representing viewpoints of all people who live, work and play in an area.

Drop this appeal and refocus on the goal: A better Westlake for everyone.