Bike plan hearing delayed until May, 100+ ride for a safer Westlake 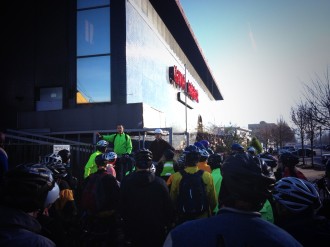 Councilmember Tom Rasmussen attended the ride and addressed the crowd

It’s official. The hearing to decide the lawsuit to delay the Bike Master Plan update has, itself, been delayed. Originally scheduled for March, the date is now set for May 14.

Meanwhile, Cascade Bicycle Club organized a bike ride along Westlake Sunday that drew around 100 people, including some members of the group suing to delay the Bike Master Plan and several City Councilmembers.

“I am committed to having a great bicycle track on Westlake,” said Tom Rasmussen, City Councilmember and Chair of the Transportation Committee. He said a safe place to bike in the corridor has been a long time coming, and that it could be designed so Westlake is “better for everyone.”

Councilmember Mike O’Brien also attended the ride and told the crowd that his concern about safety issues on Westlake was one of the first reasons he ever stepped foot in Seattle City Hall. When plans for bike lanes on the street were scrapped as part of a corridor remake in the early 2000s, O’Brien and a group went down to city hall to ask why. The city’s response: We’re working on a solution soon.

More than a decade later, there is still no clear way to safely and comfortably bike in the area. 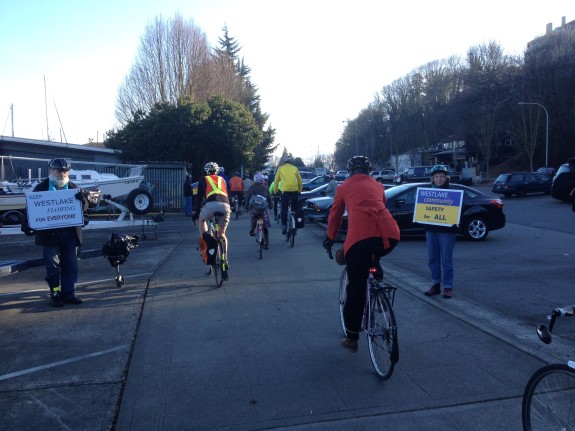 Supporters and members of the Westlake Stakeholders Group suing to stop the bike plan held signs during the ride seemingly of support for the plan’s goals.

There is a frustrating disconnect surrounding this whole Westlake/bike plan lawsuit situation. Here’s a recap of some key facts:

At one point during a pause in the ride, some members of the so-called Westlake Stakeholders Group suing to delay the bike plan started discussing his group’s preferred alignment for the Westlake bikeway (on the west side of the street). This started a good conversation about he pros and cons of placing the bikeway in different parts of the wide corridor. It was a great moment because it demonstrated that not only can we work through the planning process together, but there is a desire on both sides to do so.

Other members and supporters of the Westlake Stakeholders Group held signs during the ride that said things like “Westlake Community Safety For All” and “Keep Westlake Flowing For Everyone.” These are also goals of the Westlake bikeway project. But they are especially goals of the Bicycle Master Plan, which this group has sued to delay even though the delay will have no effect on the project they are upset about.

It’s clear that most people who are part of the Westlake Stakeholders Group want to have a say in the development of the Westlake project. While I don’t recall anyone saying Westlake residents and workers shouldn’t have a say, many apparently got that impression.

Well, if their intention was to get the city’s attention, they’ve done that. But they did it by pulling the fire alarm and waking up the whole damn city. Great, you’ve made your point and we all see you now. Now turn off the alarm and let everyone else get back to work on road safety in their neighborhoods. If you don’t you’re not going to be very popular and nobody is going to be interested in what you have to say.

Filing this lawsuit to delay the Bicycle Master Plan is an enormous overstep by the Westlake Stakeholders Group. It slows down safety improvements on streets in all corners of Seattle. If it wasn’t clear at the start, we now know that the lawsuit will do nothing to impact the Westlake project they are concerned about. Instead, the lawsuit is a move to either antagonize people working for safe streets in all city neighborhoods (many of them far away from Westlake) or to flex legal muscle and enter into Westlake conversations with an extra bargaining chip in their pocket.

It does not have to be this way. But only the Westlake Stakeholders Group is in a position to fix things. They must drop this lawsuit.

People in all parts of the city have been working for two years on this plan. It is aimed at increasing the safety and comfort of bike routes so they are comfortable for people of all ages and abilities. It has a specific focus on low-income neighborhoods that have been left out of the city’s bike investments to date. And aside from concerns about Westlake and NE 65ht St, the plan sailed through a public hearing with huge support in December. It’s all together and ready to be passed, and it’s about so much more than Westlake. This is why people are so angry about this lawsuit.

If the Westlake Stakeholders Group drags this suit out all the way to May (or beyond), then I don’t see the conversation about Westlake being very productive. I also don’t see city officials, planners or other people and groups with interest in Westlake having much of a reason to give the input of the Westlake Stakeholders Group much weight. Who wants to work with a bully group that would sue to stop road safety improvements all over the city just to make a point about one specific and unrelated project?

The Westlake residents I met on the ride Sunday were friendly, engaged and interested in making Westlake better for everyone. They were not bullies, like this legal action would suggest. I hope they pressure the group to withdraw this lawsuit and return to the table so the community can focus on how to make a better Westlake for everyone.

26 Responses to Bike plan hearing delayed until May, 100+ ride for a safer Westlake