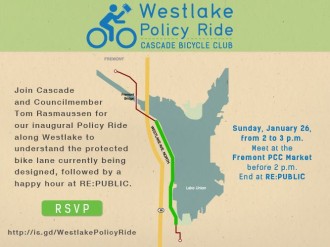 Cascade Bicycle Club has joined the legal battle over the Bike Master Plan update started by a handful of people upset about city plans to build a bikeway in the giant parking lot stretching between the Fremont Bridge and South Lake Union.

In legalese, the city’s Hearing Examiner has approved a motion by Cascade to “intervene” on the city’s behalf. This allows the club to assist the city attorney’s office with the legal work needed to defend the Bike Master Plan.

“The hearings examiner’s decision is an important first step toward bringing a speedy resolution to the Stakeholder Group’s lawsuit and helps the city begin full implementation of the new Bicycle Master Plan,” club Policy Manager Brock Howell said in a blog post.

Cascade is also organizing a “policy ride” on Westlake Sunday to demonstrate that there is a demand for a safe bikeway in the corridor. Councilmember Tom Rasmussen is scheduled to join. If you want to participate, meet at the Fremont PCC at 2 p.m. The ride will be followed by a happy hour at RE:PUBLIC.

Defeating the Westlake legal action is a goal of last resort. A much more positive course of action would be for the people behind the suit to withdraw from legal action and instead come back to the table to discuss Westlake plans. The people who filed this suit perhaps underestimated how many people in neighborhoods across the city have invested themselves in this master plan. Their obstruction is unpopular and not likely to help them stop plans for Westlake, which are moving ahead despite the Bike Master Plan delay.

As we have reported, the Westlake remake is already funded and is not reliant on the Bike Master Plan. Delaying the master plan was either a mistaken attempt to stop the Westlake plans or a transparent attempt to flex legal muscle.

Yes, Westlake improvements were included in the 2007 Bike Master Plan, too.

In fact, the Bike Master Plan update actually calls for much less radical action on Westlake than the existing and city-approved 2007 plan. The 2007 plan put Westlake on the list of “key corridors for short-term study and corridors where an improvement is needed, but the facility is unknown.” The funded Westlake project is essentially an attempt to identify what that facility will be, and planners are currently drawing up a handful of options. So if they wanted to stop the Westlake bikeway at the Master Plan level, they are about seven years late.

But that’s not all. There’s also this paragraph (in the 2007 plan’s appendix) that I’m guessing the people suing the bike plan update would not be super excited about:

If properties are redeveloped with non-water-dependent land uses on Westlake Avenue N, the city should work with local businesses to explore the possibility of constructing new buildings close to Westlake Avenue (where the existing parking lots are). This would provide space along the waterfront area for public use, including a wide-surface multi-use trail.

So the irony here is that the plan update this handful of people are suing to block actually removes this plan for a waterfront trail. All the update adds to the 2007 plan is the idea that the bike lane through the corridor should have some kind of separation from cars, which is a no-brainer if the goal is to serve people of all-ages and abilities.

So the people angry about Westlake decided to sue the wrong project. Unfortunately for them, it will likely do nothing to help them in their fight against the Westlake bikeway (in fact, it might hurt them since an obstructionist move like this and their recent so-called “private community meeting” diminishes their ability to claim they are an honest community group acting in good faith). Unfortunately for everyone else in Seattle, their legal action threatens to delay plans to improve road safety in other neighborhoods and downtown.

It is in the best interest of the Westlake Stakeholders to signal to the city and people interested in a safe bikeway that they still want to be a partner in developing Westlake plans. There’s only one way to do that: They need to drop this legal action.