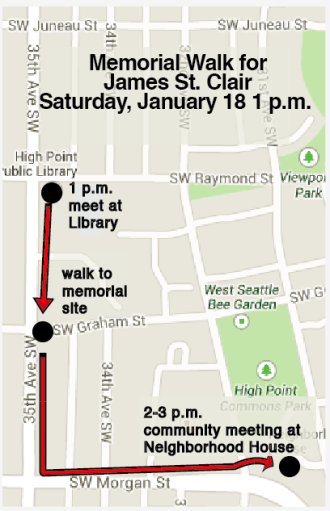 James St. Clair was walking across 35th Ave SW at SW Graham Street December 30 when he was struck by a car and killed. He was 69.

Community members and Seattle Neighborhood Greenways are organizing a memorial walk for St. Clair starting at 1 p.m. Saturday. People will walk from the High Point Branch Library to the site of the collision, then walk to Neighborhood House for a discussion.

Oscar St. Clair hopes some good can come from his family’s pain, as he told Seattle Neighborhood Greenways:

Our family, my brothers and sisters, are in sorrow.  I pray a positive light will happen because of this. A lot of people need to walk in the evening. They want to go to the grocery store like Jim did on his last night. I hope in his memory we see brighter lights, a stoplight, a safer community.

A community was devastated by a horrific collision on Monday, December 30, as James St. Clair crossed at the intersection of SW Graham Street and 35th Avenue Southwest. Mr. St. Clair, 69-years-old, had lived at High Point less than one month.  His was the second fatality at this intersection. Susanne Scaringi, 27-years-old, died on her bicycle here in September 2006.

Please join us Saturday, January 18 at 1 p.m. in front of the High Point Branch Library, 3411 SW Raymond Street. We will walk one block south to the crash site to pay our respects to the family and friends of James St. Clair, and then we will walk another two blocks to Neighborhood House at 6400 Sylvan Way SW for juice and snacks and a brief discussion with City of Seattle officials about the tragedy and how to make safer streets for everyone in the High Point area. These tragedies don’t need to keep happening.

We will be joined by representatives from the Mayor’s Office, Seattle Department of Transportation, Seattle Police, and local community leaders from the High Point Neighborhood Association, Women In Action, Seattle Neighborhood Greenways, and West Seattle Bike Connections

James St. Clair, a member of the Tlinget people, was born in Hoonah, Alaska. He lived in Seattle for over 30 years. His brother, Oscar Jacob St. Clair said that although James was disabled and walked with a cane, he was strong, independent, funny, and outgoing.

Oscar St. Clair said, “I thank you from the bottom of my heart for recognizing Jim. For seeing all people, even poor people. Our family, my brothers and sisters, are in sorrow.  I pray a positive light will happen because of this. A lot of people need to walk in the evening. They want to go to the grocery store like Jim did on his last night. I hope in his memory we see brighter lights, a stoplight, a safer community.”

Given the shocking number of people who have already died or have been seriously injured on this street, it’s time for mourning and well past time for action.

The city is well aware that the street needs safety improvements. In fact, 35th Ave SE is noted in the updated (but delayed) Bike Master Plan as a candidate for a protected bike lane, a project that would also include significant safety improvements for people on foot and in cars. SW Graham Street is noted as a candidate for a neighborhood greenway, the result of input from community members well aware of the dangers crossing the street can pose.

Too often, it takes a devastating loss to spur city action. In the case of 35th Ave SW (I-35 as West Seattle Blog calls it), it has taken many devastating losses (see this devastating story about Scaringi). It does not need to be this way. Nobody in Seattle should have to put their life on the line to walk to the grocery store.

Our deepest condolences to the friends and family of James St. Clair.