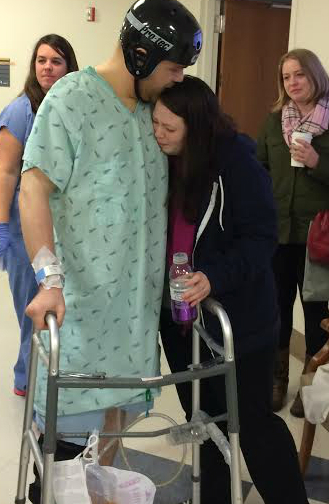 This beautiful photo was posted to the gofundme webpage

A couple active in the Seattle theater scene was struck by a car while crossing Stone Way January 11 on their way to a show at Stone Soup Theater.

Both Zach and Ashley Adair were hospitalized, though Zach’s injuries were a bit worse than Ashley’s and he was in the ICU for several days. He finally went home Thursday, but has more surgeries in the near future.

The couple has been recovering, and friends started an online fundraising campaign to help with unexpected costs the couple will likely encounter.

They do have health insurance and the person driving did stop and remain at the scene. But don’t let that stop you from pitching in, because they are sure to encounter many unexpected costs and it could be a while before they are able to get back to work.

We wish them both a speedy recovery.

They were struck crossing Stone Way at N 41st Street, a notoriously dangerous crossing that has remained dangerous despite a high number of people using it including many children headed to Hamilton International Middle School, Wallyhood reports:

That intersection at 41st and Stone, the site of several “crosswalk sting operations,” has been a problem for years. In 2005, a 12 year old Hamilton International Middle School student was hit by a driver who pulled around cars that had stopped so that the boy might cross. He survived, and his mother has been advocating tirelessly for pedestrian safety ever since.

Despite her efforts and NINE years of further accidents (including another one involving a pedestrian and a car in October), this crosswalk is no safer. SDOT put Stone Way on a “road diet” a few years back, reducing the number of lanes with the hopes that this would improve pedestrian safety. As the road did not get narrower, it seems like that was a bit of magical thinking. Visibility has not been improved and people are still getting hurt.

With many Hamilton students using that crosswalk, the Fremont Neighborhood Council has been petitioning SDOT to install a pedestrian-activated crossing light at that intersection.

Unfortunately, Seattle’s dangerous streets continue to take a terrible toll on residents. The city is getting better at responding to traffic violence with safety projects for dangerous streets, but its too little too late for those injured or killed.

As we reported earlier, community members are holding a memorial walk Saturday for James St. Clair, who was killed December 30 while walking to the grocery store in West Seattle. The walk meets 1 p.m. at the High Point Branch Library.

The Ravenna-Bryant Community Association reports this week that the city will conduct a study of NE 55th Street following a terrifying hit-and-run in November. Susan Aylesworth, 58, was walking home from the grocery store with her husband when she was struck and seriously injured. The traffic study could lead to safety improvements in the area.

More info on how to donate to help the Adairs: