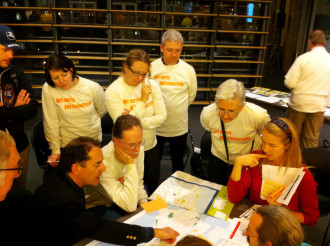 West Seattle residents weigh in on plans for their neighborhood

After an unprecedented number of hours reaching out to community groups, industry and commercial stakeholders, and the public at large, the Bicycle Master Plan update is finally in the hands of the City Council.

The plan represents an impressive and unprecedented amount of community input and expert consultation on challenges and opportunities to make Seattle the best city for bicycling in the nation. It includes an innovative vision for Seattle streets that encourages health and economic prosperity in every neighborhood, with an emphasis on reaching low-income areas that bear a disproportionate number of traffic injuries and deaths.

It is quite likely the best bike plan in the nation. As Mayor McGinn’s office sends the plan to the City Council today, it is just one step away from gaining approval. 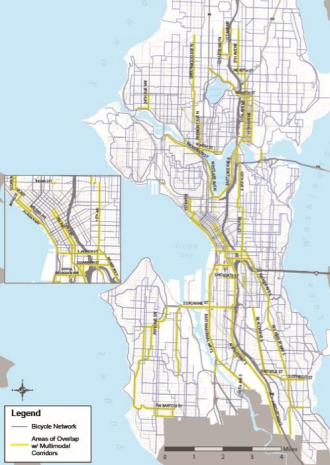 Map shows multi-modal corridors where bike plans overlap with transit/freight. The plan includes a framework for making sure all uses are preserved

The plan represents many compromises. It’s not this bike blog editor’s dream plan, but that’s probably a good thing. Potential conflicts with transit expansion plans or freight mobility were taken seriously by the plan’s authors, and that should give the plan credibility. It is not only bold, but also realistic. It was not created in a bikes-only silo, but conferred constantly with the freight advisory board and heavily referenced the existing transit and pedestrian master plans.

The plan dramatically improves on the important-but-flawed 2007 Bike Master Plan.

“Probably for its time, it was just fine,” said outgoing SDOT Director Peter Hahn. The 2007 plan has been widely criticized for focusing on encouraging people on bikes to share lanes with car traffic on busy streets (thus, the reason so many busy streets have “sharrows” painted on them). “Due to compromises at the time, sharing lanes lead to some friction.”

The new plan focuses on protected bike lanes and neighborhood greenways to create a connected network of bike routes that will be comfortable to people of all ages and abilities while also improving neighborhood safety in general and reducing all types of traffic collisions. Hahn hopes this focus on reaching out to all Seattle residents — not just those brave enough to bike mixed with heavy traffic — will garner the plan “tremendous support across the community.”

“Certainly, there were some elements of controversy and probably will continue to be, but this is our best shot at it,” he said.

Adopting the plan does not come with a fiscal note, but it will put pressure on incoming Mayor Ed Murray and the new City Council to come up with a plan to adequately finance improvements and stay on track to complete most or all of the plan within 20 years. To that end, Mayor McGinn is urging the Council to adopt the goal of incrementally growing the budget for bicycle-related improvements from the current rate of $7-12 million to $20 million. From McGinn’s letter to the Council:

I also propose that the City Council set an annual funding goal of $20 million, which will be required to implement the improvements identified on the bicycle network plan map over the next 20 years, according to the planning-level cost estimate for plan implementation. In recent years, annual funding levels for bicycle facilities have been between $7 million and $12 million. With potential opportunities for bicycle funding increases in a renewed Bridging the Gap Levy, renewal of the Parks and Green Spaces Levy, a new local funding option approved by the legislature, continued availability of grant funding, as well as an improving economy, an incremental increase to $20 million a year is an attainable policy goal.

The raw total price tag for 474 miles of new and upgraded bike facilities clocks in between $391 million and $524 million. That estimate is full of caveats, though, and should not be taken at face value. It includes all elements of implementing the plan, including staff time and elements of projects geared toward the safety and access of other modes, such as improvements for people on foot. It also does not factor in the fact that SDOT’s biking and walking program has a great success rate at securing grants to assist with costs.

That price also excludes the reality that a great many of these projects will happen in conjunction with other projects (repaving projects, utility work, etc) in which the costs would be shared. The Broadway Bikeway, for example, largely paid for itself because it was built on top of a bunch of utilities that the First Hill Streetcar project would have otherwise needed to move. SDOT is actually pretty good at combining projects to maximize the investments from other city work.

And, of course, the “cost” of these bike projects does not factor in savings in the form of increased economic activity often accompanying high quality bike projects as well as the cost savings associated with a healthier population. And what is the value of saving lives from traffic violence? It’s hard to place such values into an economic context.

Moving forward, the City Council, which has been active in the development of the plan from the start, will discuss the plan through December and will hold a public hearing. They expect to vote in early 2014, meaning the Bike Master Plan might be one of the first major documents to bear Mayor Ed Murray’s signature.

Of the thousands of comments received on the plan, NE 65th Street received by far the most attention. The plan includes a NE 65th Street option that is an attempt at compromise, though it will likely disappoint some people who bike in the area and some neighbors who opposed any protected bike lanes at all on the street. During community outreach, the option they went with was known as Option C.

The plan also changed plans for protected bike lanes on Stone Way, instead planning a neighborhood greenway on Woodland Park Ave. These changes were made at the urging of several neighborhood groups.

For our coverage of how the plan got to this point, see our BMP archives. Stay tuned for more details on changes, which we will post once we get a digital copy of the plan. 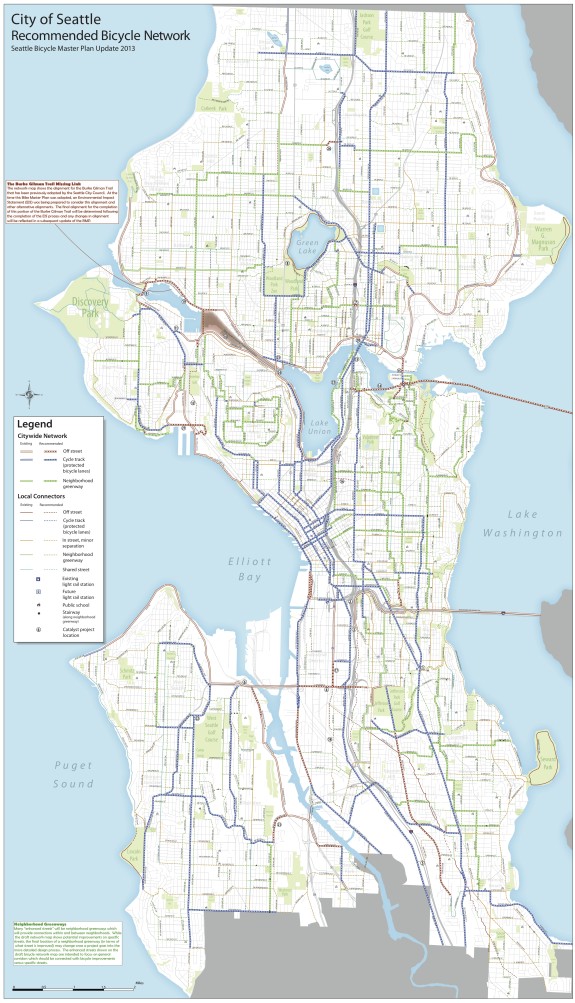 Founder and Editor of Seattle Bike Blog.
View all posts by Tom Fucoloro →
This entry was posted in news and tagged 2013 bike master plan update. Bookmark the permalink.