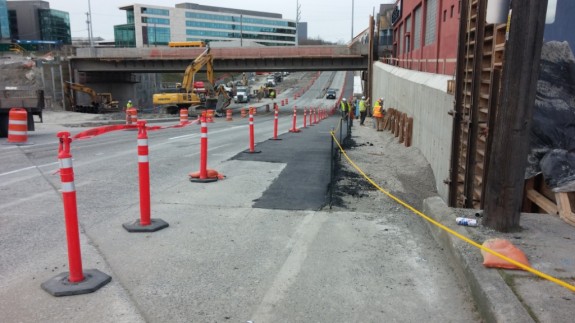 After decades of being isolated from the city’s bicycle network, Lower Queen Anne is on the verge of a bike revolution. And a new temporary walk/bike path on Mercer under Aurora gives a preview of what it will be like to finally have a comfortable way to cross into the neighborhood from Dexter Ave.

Marked off with construction cones, the temporary path is significantly wider than the previous super-skinny sidewalk squeezed onto the side of the old Aurora underpass, which was extremely uncomfortable for people on bikes and foot alike. And there will be a temporary path of comparable size throughout the rest of construction, according to SDOT:

People who bike to Lower Queen Anne are already ecstatic to finally have a comfortable way to cross into one of the city center’s biggest bike route black holes. Reader Peri Hartman sent us the photo above, asking me to thank whoever is responsible:

I don’t know who to thank, but “thanks” for the new, temporary bike & ped lane on Mercer St. under Aurora.  It’s significantly wider and safer than the old 4′ sidewalk.  I used it today for the first time!

Those thanks go to the city’s Mercer Project team. In fact, it’s among the few significant benefits people on bikes will notice from the massive, $260M+ remake of the 1.4-mile-long street, which is largely focused on simplifying car movement through Lower Queen Anne and South Lake Union (see our previous post on how bike connections into Lower Queen Anne could work).

To put this cost in perspective, the low-end estimate for building the entire 20-year Bike Master Plan is $390M for 474 miles of trails, protected bike lanes and neighborhood greenways.

Lower Queen Anne is one of the city’s densest neighborhoods, but it has been bound by dangerous busy streets, highways and train lines for at least a generation, isolating this central neighborhood from the rest of the city.

In 2012, the Thomas St biking and walking bridge opened, providing a key connection between the neighborhood and the Elliott Bay Trail.

In the next couple years (assuming no huge delays), the Alaskan Way Viaduct Replacement Project will see the closing of the Battery Street Tunnel and will reconnect John, Thomas and Harrison Streets across Aurora. 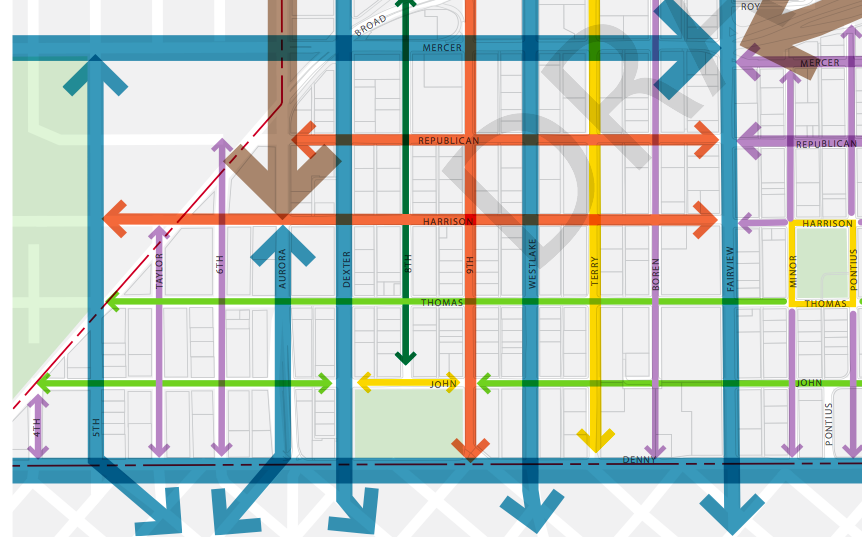 The Mercer Project is in the process of widening that street’s Aurora underpass and, once completed, will include a separate protected bikeway and sidewalks.

It’s exciting to imagine what these bike access changes could mean for Lower Queen Anne. Long essentially an island of bikeability, it is on the verge of rejoining the city. This means a boost for businesses and another transportation choice for neighborhood residents. And, of course, it makes it much easier for people to get to Seattle Center events without driving.

Here’s more on the project, from a 2013 presentation: