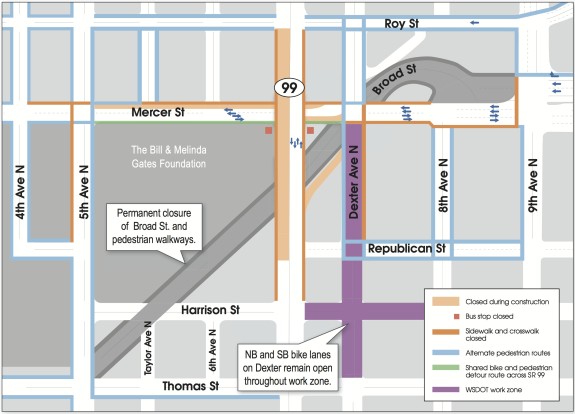 The biking and walking shared pathway on Mercer Street under Aurora is switching sides Thursday as construction on the Mercer West project continues.

Someday (fall 2015), there will finally be a separated and protected space for people to cross Aurora on a bike between South Lake Union and Lower Queen Anne. But until then, be ready for continued detour changes and sometimes scary temporary paths.

For people who had been using the tiny ledges that for decades were passed off as “sidewalks” on Mercer and Broad Streets as they pass under Aurora, the temporary bike/walk path created on Mercer in February was actually an improvement. But that’s a pretty low bar to jump over.

This actual text conversation I had with a friend recently pretty much sums up the experience of crossing under Aurora today: 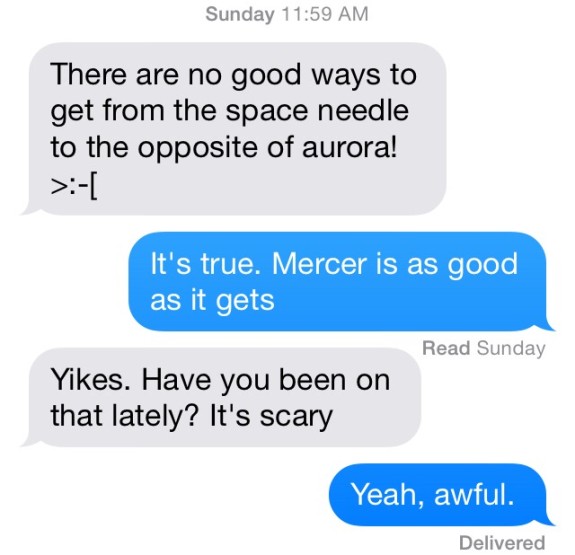 As a reminder, crews will not be working during the holiday weekend. For your safety, please follow detour routes and cross the roadway only at designated crossings.

More information may be found at: http://www.seattle.gov/transportation/mercercorridor.htm.

On a related note, how have you noticed the bike experience change since Mercer went two-ways and Broad was shut down? Specifically, have you noticed any issues with traffic turning from Dexter to west-bound Mercer? Let us know in the comments.