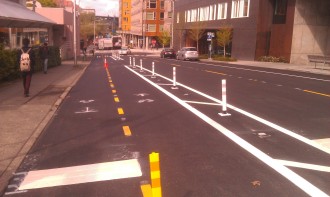 The city is nearly finished with work on two blocks of protected bike lanes on NE 40th Street in the U District.

As we reported last week, the section is intended to serve both as a permanent addition to the bike network and to help people detouring around construction on the Burke-Gilman Trail and on Brooklyn Ave.

As with all protected bike lane projects, the biggest challenge is the intersections. 40th and Brooklyn was already a four-way stop (temporarily 3-way stop due to construction west of Brooklyn), and that will remain essentially the same.

40th and the Ave had a traffic signal, but SDOT engineers studied use and determined that the vast majority of cross traffic was actually people walking. So they turned the signal into a flashing red all-way stop, which should decrease the wait time for people walking and help traffic flow, SDOT Traffic Engineer Dongho Chang told the Seattle Bicycle Advisory Board.

At 40th and 15th Ave, SDOT added a “scramble” phase, also known as an all-walk phase. This allows people on foot to cross diagonally, saving them potential wait time. The city also added signs telling people biking they can go during the walk phase, but to yield to people walking.

Chang sent me this photo demonstrating the all-walk phase with the message: “All pedestrian walk signal… students catch on fast!” 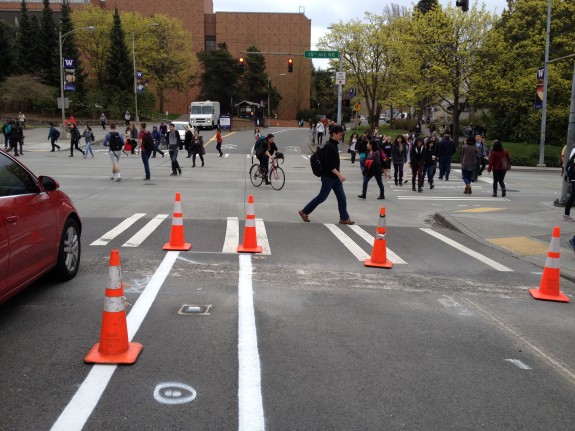 The new bike lanes almost connect UW campus to the existing bike lanes under the University Bridge to the crazy 5-way intersection and connection to the Burke-Gilman Trail at 7th Ave NE. While the city no longer owns some of the right-of-way to connect them, they are working with UW to figure something out, Chang said:

We’re working with UW on the west side of Lincoln Way to see if we can provide additional improvements from the off-ramp to the 5-way intersection/connection to the Burke.  Lincoln Way was vacated and is now UW’s property, so SDOT does not have the ability to make changes through that section.  They have lots of construction activity on the building side so they may not be able to provide much of a facility for bicycle riders and pedestrian in the short term.  UW is making some amazing improvements along the Burke so it’ll be worth the wait.

One exciting aspect of the new protected bike lanes is the fact that the city built them as though they were just part of the normal way we do road work these days. As the City Council is (hopefully) on the verge of passing a Bike Master Plan that includes 100 miles of protected bike lanes, it is not practical to debate every block of them to death. Big projects need lots of outreach, of course. But projects like upgrading existing paint-only bike lanes (the case here) should not always require such work.

Here’s a look at the design schematics: 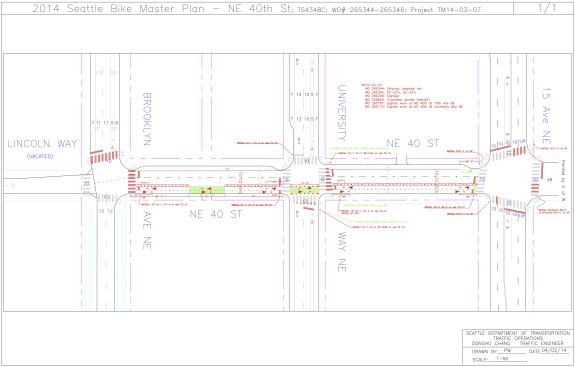