It’s the first Wednesday of the month, and that means the Seattle Bicycle Advisory Board is meeting. The volunteer board provides guidance and feedback on various city projects and policies that impact bicycling.

As with last month, I’m posting the agenda in advance in case you want to sit in on the meeting. If you can’t make it, I’ll post updates below during the meeting. 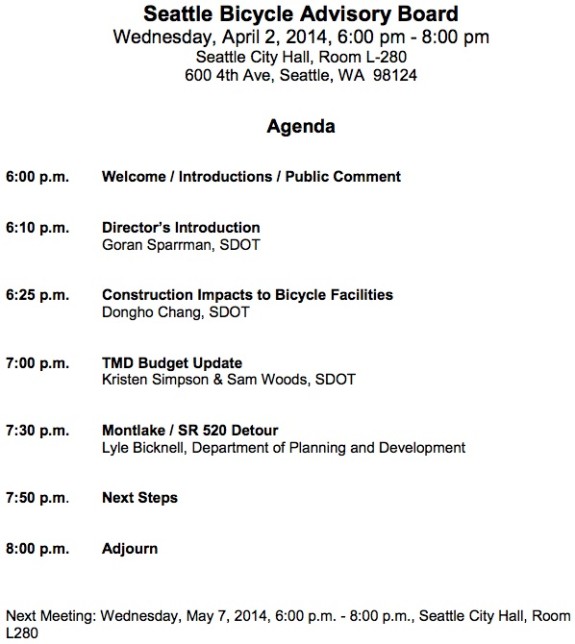 Updates from the meeting

Bicycle Master Plan will be considered in committee Tuesday and could go to the full Council for final approval April 14.

“How do we make our bicycle system more accessible to people of all ages and abilities?” That’s the question Sparrman thinks the updated Bicycle Master Plan answers.

As Seattle grows, our road system will stay congested, he said, and we can’t build more roads. So the growth must be in walking, biking and transit.

23rd Ave: Started with only one mode in mind, but later realized there were other community needs. City came up with “a comprehensive plan” to balance the space for users. Plan now includes expanded sidewalks to create more pedestrian and green space. Decided to move the bikes to a parallel street. “We can agree or disagree with whether that was the right facility to do.”

How do we hit the ground running on the Bicycle Master Plan?

There is support from the mayor and City Council to make progress on the Bicycle Master Plan, Sparrman said. We need strong examples of successful facilities.

Huge need it a cycle track through the Center City. Biking through downtown “is a pretty frightening experience.”

West Lake Sammamish Parkway in Bellevue was a hard public battle while he was working for the City of Bellevue. Now, a part of it is built and “people love it.”

Bicycle Advisory Board should continue advocating for higher funding and holding city accountable for using the money they have to build high quality facilities. The Board could also be helpful “conferencing” with people advocating for other modes on the city’s limited street space.

Lots of construction along the Burke-Gilman Trail in the University District, including UW Station work and new UW buildings.

The city and UW wanted to make sure needs are being served, especially due to all the construction. Took advice from University Greenways (shout out to Eli) and created a new two-way protected bike lane on NE 40th Street between Brooklyn and 15th.

Did the analysis on the University Way intersection and realized that almost all the cross traffic was from people walking. Traffic flow should actually improve by turning it into a four-way stop instead of using the current traffic signal.

“Maybe opening a section of the Broadway Bikeway early wasn’t the best idea,” Chang said, because you get people using it, then have to close parts for ongoing construction. “Lesson learned.”

Try the best they can to make sure there is a pedestrian pathway and a bike pathway during construction work.

Dongho adds that people are human and might make mistakes. The city has inspectors who can make sure contractors are handling bike and walk access near construction sites properly.

As construction picks up, city needs to make sure there are enough inspectors out there keeping construction zones in line.

When a contractor uses right of way (parking lane, bike lane, sidewalk), there is a fee that escalates over time. So there is an incentive for them to close things for as short a time as possible.

Board members point out that some of the biggest construction detour challenges have come from WSDOT. Chang says the state has been “a very responsible party” whenever the city has come to them with issues. Atlantic Street overpass issue is prime example.

Chang says the state has their own rules and guidelines they have to follow, and says they have been receptive to ideas like installing a cycle track on Royal Brougham near the stadiums.

Interesting side note: Nearly all SDOT presentations now include preface stating the city’s transportation mission to achieve zero traffic deaths and serious injuries by 2030. Cool to see Vision Zero get reenforced like that.

Bridging the Gap is mostly property taxes, but does have a commercial parking tax element.

It’s hard to tease out how much money is spend on bike stuff because so many projects have shared benefits. How do you split up the percentage of a safe streets project according to mode?

Problem is that the Bike Master Plan has a dollar sign attached to it, so the Board wants to be able to make sure the city is on track to complete it on schedule.

State is gearing up to replace the north part of the west approach bridge. Schedule for construction was summer, but it may be slipping to winter or even later.

Biggest issue: 24th Ave bridge will be closed during construction. Vital to bike movement through the area.

Detour will follow E North Street to Montlake Boulevard, then widen the sidewalk to make it big enough to be a multi-use trail.