I’m trying something new for this month’s meeting of the Seattle Bicycle Advisory Board. I’m posting the agenda now in case you want to attend (they are open to the public). But and I will update this post during the meeting tonight to fill you all in on what is discussed.

The Seattle Bicycle Advisory Board is run by volunteers who are approved by the City Council to advise the city (especially SDOT) on matters relating to bicycling. SBAB meetings (first Wednesday of each month) are often interesting, but items discussed don’t always get turned into full stories here on the blog. I’m hoping this will be a way to get interesting stuff out there. So check this post later for updates. 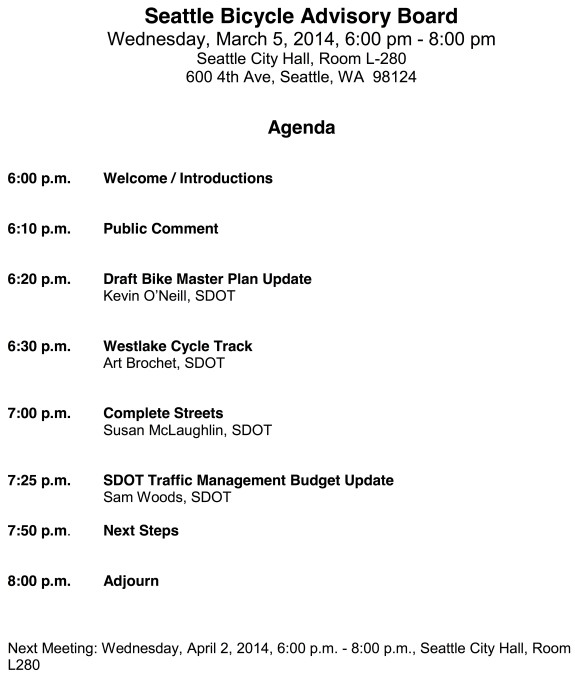 It is wet outside. Lots of soaked rain gear in this room.

Comments are still coming in amid the delay in City Council adoption. Any changes would have to be pretty major to get in at this point. Staff have been making minor tweaks.

Transportation Committee will take it up on April 8, could get voted out of committee to be put up for a full Council vote in early April.

Q: Has the delay in the plan impacted the city’s work? A: Not yet, but they are starting to develop a multi-year work plan, and it would be great to have the plan passed.

Budget presentation not happening at this meeting, but Sam Woods wants to know what specific budget info the Board would like to see.

Part of the problem is that it’s sometimes hard to tell what is a “bicycle” project.

Notes that city ordinance 122386 was “an unfunded mandate.”

Seattle arterial streets are 60-65-feet on average, constrained for so many competing uses.

Apparently there is an allowable exception to the complete streets ordinance for the sake of “public safety.” Susan says she has not seen this used.

Merlin Rainwater (Bike Board member) questions the idea that a parallel street can make an arterial street “complete.” We’re making “complete streets” not “complete corridors.” A nearby neighborhood greenway doesn’t adequately improve access to the many amenities and destinations on a commercial street.

Perhaps the next generation of complete streets will involve other departments, not just SDOT.

Goal to start construction in 2015.

About 1,275 parking spaces in the corridor.

Why a bike lane on Westlake when Dexter is so close?

Next open house is in May.

Survey will go out to residents and business owners tomorrow.

Design advisory committee will be appointed by Mayor Ed Murray. Will advise the design team during Phase 1, and may evolve into a another role later.

Looking for people who live, work and travel through the area. People who walk and bike will be part of it. Cascade has a spot for sure.

Meetings will not exactly be secret, but also not totally public. Trying to cut down on disruption, hoping the committee members will be able to develop a relationship with each other and act as liaisons to their communities.

Will there be an environmental impact statement? Unsure yet if the project scope will meet the requirements for one.

Putting the cycle track on the west side of the street is looking pretty pricey. Either it requires retaining walls if the street is maintained as is (four lanes), or it is built into the street and the drainage must be redone.

City is not waiting for the light rail project. Westlake is one of the options for a high capacity transit route to Ballard and beyond, but that is operating on a much longer time frame than this project.

A couple routes added to this year’s workplan include:

Founder and Editor of Seattle Bike Blog.
View all posts by Tom Fucoloro →
This entry was posted in news and tagged seattle bicycle advisory board. Bookmark the permalink.