The Seattle Bicycle Advisory Board is seeking new members 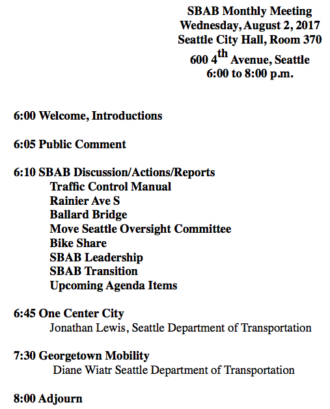 The agenda for the August meeting (tonight!) is a good example of what a typical meeting is like.

The Seattle Bicycle Advisory Board is a great way to get more hands on with bike projects in the city and get some government experience at the same time. It’s a volunteer gig that meets the first Wednesday of every month for two hours, though there is usually more work to do between meetings.

The Bike Board gets early looks at public projects that affect bicycling, and the board can provide often influential advice to push the city to be bold on bike safety.

You do not need to be an “expert” on biking or transportation policy. You just need to support the goal of more and safer cycling and be willing to listen and ask questions.

So apply, and be sure to tell anyone you think has a good perspective on biking in our city to apply, too.

Details and how to apply, from SDOT:

The Seattle Bicycle Advisory Board (SBAB) is now accepting applications for new members to advise the City on the concerns and needs of the growing bicycling community, applications are due by August 11.

The volunteer board, which was created by Seattle City Council in 1977, plays an influential role in implementing Seattle’s Bicycle Master Plan. The board advises the Mayor and City Council, participates in planning and project development, evaluates policies and makes recommendations to all city departments including the Seattle Department of Transportation (SDOT).

Board members serve a two-year term, with an opportunity to serve a second term. Current members represent all types of bicyclists and skill levels, from casual weekend riders to year-round commuters.  The board meets the first Wednesday of each month from 6 to 8 p.m. at Seattle City Hall.

SBAB members shall be representatives of:

Mayor Murray and City Council are committed to promoting diversity in the City’s boards and commissions. Women, youths, seniors, persons with disabilities, sexual minorities, and persons of color are encouraged to apply.  Interested persons should submit a resume and cover letter explaining their interest via email by August 11, 2017 to Kyle Rowe ([email protected])  with “SBAB” in the subject line.  Interested persons without internet access may call 206 684-7639.

To learn more about the board or join the mailing list for agendas and other board updates, please visit http://www.seattle.gov/sbab/default.htm.