Seattle Times Ed Board adds its support to the Westlake bikeway 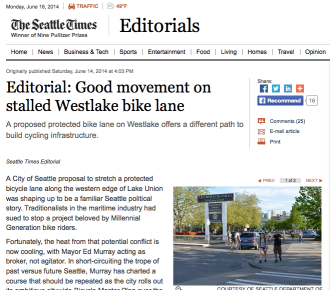 The Seattle Times Editorial Board added its two cents about the Westlake bikeway project this weekend, backing the city’s plan to build protected bike lanes from the Fremont Bridge to Lake Union Park and praising Mayor Ed Murray’s ability to steer the process out of a litigation hole (so far, at least).

When the Times and the Stranger both agree about something, you know you’ve got a popular idea. Certainly, we here at Seattle Bike Blog do not always agree with the Times Ed Board on transportation issues. For example, the board recently opposed King County’s ill-fated Prop 1 to shore up Metro bus service, a measure we supported and were sad to see fail.

But the Times Board, especially in recent years, has been pushing for better bike lanes, urging Seattle to be “in the vanguard” of city cycling. To them, the Westlake bikeway simply makes sense: Reorganize the parking to make it work better, and use the space created to build a great, flat bikeway between the city’s fastest growing neighborhood and its busiest bike trail.

As we’ve said, there really is no reason to fight. This project can and should be a win-win. 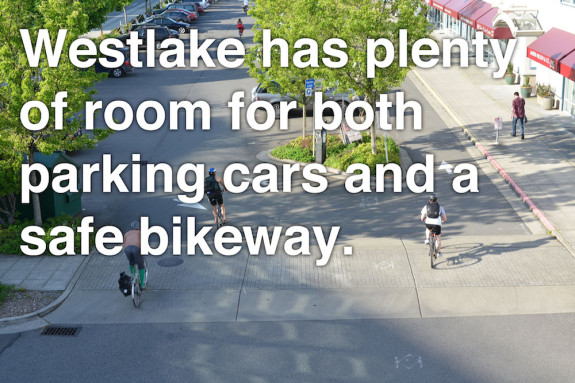 The Board uses the editorial to get in a few swipes at former Mayor Mike McGinn — the SBB-endorsed mayor the Times Board opposed from beginning to end of his single term — by praising Murray for “acting as broker, not agitator” in moving the plan along instead of letting it get mired in a millennial generation vs the maritime industry fight.

“In short-circuiting the trope of past versus future Seattle, Murray has charted a course that should be repeated as the city rolls out its ambitious citywide Bicycle Master Plan over the coming years” the editorial says. Murray ran for mayor on the promise that he could get more done by bringing more people together. The Board, which endorsed him, sees the Westlake project as an example that he is fulfilling that promise.

Though judging by this scary, violent comment some maniac placed on a plan skematic at a recent public meeting, I don’t think everyone is down with the Ed Board’s rosy view yet. But the Board knows this, and urged opponents to “stay constructive, and not default to angry anti-bike rhetoric.”

After all, this is about making Seattle a better place to be and easier to get around. Once it is built, it will be a “jewel,” the board says.

Once the parties started talking, they found common ground. The parking lot has 783 free parking spots, allowing it to be a no-cost park-and-walk lot for South Lake Union workers. Losing some of them, and swapping others for paid spots could accommodate the businesses’ interests in ample parking.

The city must continue its nuanced approach, ensuring Lake Union floating homeowners and boat owners aren’t squeezed out. But the businesses along Westlake must also stay constructive, and not default to angry anti-bike rhetoric. The city’s interest is clear: In exchange for parking, it gains a safer waterfront biking route for commuters, recreational riders and tourists. Call it a very fair trade.

The Westlake bike lane will — and should — be built, and the dust-up will be forgotten among regard for a jewel of a trail. How it was built should be the project’s true legacy.