Seattle Times Editorial Board: Seattle should be ‘vanguard’ of safe bike infrastructure 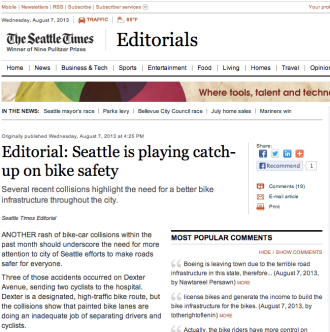 The Seattle Times Editorial Board wrote a Wednesday editorial urging the city to be on the forefront of safe, quality bike infrastructure like cycle tracks and neighborhood greenways.

As we noted in July, there has been a clear shift in the board’s language around cycling issues. Once often used as some kind of political weapon to batter Mayor McGinn, the Ed Board has changed tones recently with many members expressing support for more and better cycling infrastructure.

But now the board has unequivocally voiced its support for the bold, next-generation bike infrastructure tools under heavy discussion in the development of the Bike Master Plan update, even saying that “Seattle should be in the vanguard” of quality cycling infrastructure:

We all need to pay more attention — drivers, cyclists and pedestrians. But Seattle also needs a smarter, more forward-looking approach to bike infrastructure.

The city of Seattle is redrawing its Bicycle Master Plan, first adopted in 2007, with a goal of reducing collisions by one-third and tripling bicycling by 2017.

The plan includes more “cycle tracks” — biking lanes separated from traffic by elevation or a barrier — and “greenways” in neighborhoods where traffic moves at low speeds and people on foot and bicycles have priority.

Portland and Vancouver, B.C., are models for how to build dozens of miles worth of protected greenways. New York and Chicago have shoehorned miles of dedicated, separated bike paths into dense urban corridors. Seattle has some catching up to do.

Yes we do! And it’s great to have the Times fully on board.

This entry was posted in news and tagged seattle times, seattle times editorial board. Bookmark the permalink.

20 Responses to Seattle Times Editorial Board: Seattle should be ‘vanguard’ of safe bike infrastructure