Is the Seattle Times falling in love with city cycling? 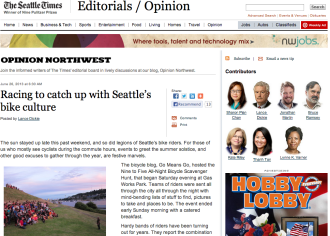 And most of all, Seattle is willing to sacrifice some travel lanes and parking to make this all happen.

It’s not that “the bike people” are winning, exactly. It’s that the conversation has shifted. A much wider net of new voices have risen to the top of the city’s streets conversation. It’s not “bikes vs cars” anymore, it’s everyday people wanting safe, comfortable and exciting streets for people of all ages, abilities, incomes and means of travel.

Perhaps the best illustration of this is the palpable shift in tone and opinions coming from the Seattle Times Editorial Board. Not long ago, it seemed like there was almost a fight between cycling advocates and the Ed Board. When I saw a Times opinion headline pop up with the word “bike” in it, I would cringe: What ridiculousness would I need to debunk this time? Bikes were a political football, some kind of symbol caught up in disputes between a handful of city egos.

But now Times editorial headlines look like this one from Lance Dickie: Racing to catch up with Seattle’s bike culture

As Seattle works its way through improvements to the city’s cycling grid, the focus can get down to moving back and forth to work and school. One can easily forget, or be wholly ignorant of, the social network and community that those on two wheels can share. It is also an insight into the political clout to be organized in the name of better, safer bicycle routes.

Stay in touch with the progress on bike routes with the SeattleBikeBlog and the reporting of Tom Fucoloro.

Couldn’t have said it better myself! Also:

The social dynamic and memories of the pure fun of bike riding almost have me inspired to haul out my Miss Marple three-speed for a trip down the Burke-Gilman.

Do it! And I hope other radio hosts, columnists and city leaders do the same. Nothing diffuses bike skepticism as quickly as hopping on the saddle and giving it shot yourself, as one Toronto Star columnist described recently:

The idea was to provide us with examples of the perils encountered while riding, and to show us the need for and advantages of infrastructure that makes cycling safer and more viable.

But an unintended consequence of our journey was soon apparent: Cycling is an immensely enjoyable way to get around, especially on a fall day when moderate exertion results in minimal sweat.

It promotes a sense of well-being and gets the blood flowing without leaving one gasping for breath, and allows riders to quickly manoeuvre through heavy traffic without adding to the queue of gridlocked vehicles.

A note to any Seattle media: If you want to go for a bike ride some day, I’d love to give you a tour. Email me (I bike slow).

But back to the Times. The conversation about cycling on their pages has also shifted in large part to some new voices. Jonathan Martin, for example, wrote two great columns earlier this year making the case that data fully supports building protected bikeways on city streets. Both the large volume of people cycling and the harsh reality of recent deaths point to the need for higher-quality bike infrastructure:

But the death of Lance David, a 54 year-old veteran cyclist killed last week on his way to his job at Expeditors International (via Seattle Bike Blog), is a stark reminder that roads shared with two-ton cars, let alone multi-ton trucks, requires vigilance, by bikers and by drivers.It also calls for dedicated, separated bike paths – aka the city’s proposed cycle tracks – on the high-traffic routes.

He also wrote a good piece on why remaking the Burke-Gilman Trail through the UW would be a great TIGER grant project.

Meanwhile, while he’s not actually an Ed Board member, FYI Guy Gene Balk has been doing some great work crunching numbers on road safety and commute trends in the area. He’s written about walking safety, created a great map of bike commute trends by neighborhood and, this week, showed that young people in Seattle are increasingly less interested in driving:

Data firm Scarborough Research surveys thousands of people in the Seattle metropolitan area on the ways they get around.  The data indicate that among younger people there has indeed been a shift away from driving — and it’s happening at a fast pace.

Today, 80 percent of adults under 35 in the Seattle metro say that driving is a primary mode of transportation for them.  In 2008 — just five years ago — that number was at 90 percent.

In the same period of time, there have been significant increases in the percentage of young people here who walk in town at least one mile per week, and who regularly ride the bus.

11 Responses to Is the Seattle Times falling in love with city cycling?