On Cascade’s strange day in the spotlight 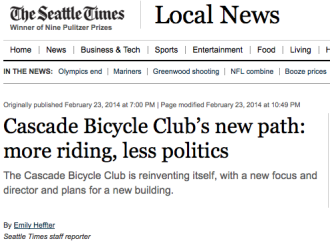 Between an outreach email mini-fiasco and a Seattle Times story that suggests they are downplaying their role in politics, Cascade Bicycle Club had a weird day in the spotlight Monday.

The story says that the club is doing less lobbying than it did during the days David Hiller was Cascade’s aggressive Advocacy Director three years ago. But the story (well, the headline, really) gives the idea that less lobbying means less politics, an idea Cascade rejected on Twitter saying they prefer “More riding, better politics.”

We have been covering the shakeups at Cascade and whether there has been a movement away from advocacy work at the club, a fear some people close to the club have had. But considering they have hired Thomas Goldstein (formerly with Washington Bus) and have a sizeable advocacy staff, these fears have not yet been actualized.

One need only look back a couple weeks to see clear evidence of advocacy work, as Cascade got about 100 residents, the mayor’s office and several councilmembers engaged in an “advocacy ride” to promote a safer Westlake and pressure a group of people suing to delay the Bike Master Plan to drop the suit. Within weeks, the suit was dropped. While Cascade is not solely responsible, the ride and the club’s legal assistance against the suit certainly were factors.

Cascade has decided to focus regionally, partnering with Washington Bikes on statewide lobbying efforts. But since the two groups have long had very similar legislative desires and Washington Bikes has gathered a powerful head of steam since big shakeups there in 2012, it would be a stretch to consider their partnership as a sign Cascade is ditching politics.

If anything, I see this as a sign of just how impressive Washington Bikes (formerly the Bicycle Alliance of Washington) has been at gathering a truly statewide bike advocacy movement.

In the meantime, Cascade has dedicated staff resources to advocacy on the Eastside, where communities are becoming more and more interested in bicycling and big projects like the Eastside Rail Corridor trail deserve big attention.

If the club does seem to move away from advocacy, I will certainly call them on it. Cascade is a big organization that handles a huge chunk of our region’s collective bike advocacy dollars. They have a responsibility to work toward a Puget Sound region with more bicycling and safer streets.

But so far, I have seen the club working to create a wider tent for bicycling, where more people get active and take a leadership role in promoting safe streets in their communities (see: the Advocacy Leadership Institute). When the time comes that a big political push is needed, Cascade is betting that having more engaged people in all neighborhoods will be powerful.

Will Cascade get as much done with their new staff and style? We’ll see. But I simply don’t see evidence that they are foregoing politics as the Times story suggests.

Monday morning, some people who were subscribed to Cascade’s email lists received an odd email. Written in the voice of a self-aware email marketing computer, the Bike Bot berated these humans for failing to open or take action on the club’s emails.

Some people (likely those who recently watched the Spike Jonze film “Her”) thought the email was funny. Others thought it was creepy, given all the recent NSA privacy issues in the news recently. While tracking recipient activity is a common feature of email marketing software, it is certainly strange to see it used to shame people into getting engaged.

On further inspection, even Cascade decided the joke was not very good, sending a follow-up email saying:

This morning, in trying to add a little levity to Cascade’s effort to ensure you only receive the emails you want, we crossed a line. What we thought was funny now clearly wasn’t. Our sincerest apologies.

Here’s the full text of the initial email:

Let me introduce myself. I’m Bike “I’m smarter than you” Bot, the Director of Cascade’s Intelligence Agency.*

I’m not human. I’m an internet program that’s been trolling through how many emails you’ve been opening from the Cascade Bicycle Club and how many actions you’ve been taking.**

And I have to say, I’m a little disappointed (like Siri gets when you ask her a dumb question … you know the tone). You’ve opened fewer than one out of four emails from Cascade, and you’ve never, ever signed a petition, sent an email to a decision-maker, or attended a lots-of-humans-in-the-room (ick) Cascade advocacy event.

So, I’ve instructed the human advocacy staff at the Cascade Bicycle Club to remove you from the advocacy email list. Unless you tell me otherwise, you won’t receive another Advocacy Alert from Cascade.

Yes, you’ll still receive all sorts of other emails from Cascade, like the “Braking News” emails that are sent every two weeks, which includes updates about our advocacy efforts. Also, if you’re signed up for Commute Challenge (a.k.a. Bike Month) emails or daily ride emails, you’ll continue to receive those too.

But if you want to continue to receive timely emails about important advocacy actions to improve bicycling in your community and across the region and state, well, then you need to tell me that you want to stay on Cascade’s Advocacy Alerts.

By the way, here’s a public service announcement for all you humans from an internet bot: don’t get any ideas from the movie “Her.” We won’t love you, we’ll play you. Siri doesn’t even like you. Plus, humans shouldn’t be stealing my dates.

Sincerely trolling through your emails to create a better world,

P.S. Did you see that the Cascade Bicycle Club was featured on the front cover of The Seattle Times today?

* This is a joke. No such agency or bot exists at the Cascade Bicycle Club. Or does it? ‪#‎EvilLaugh‬

** Actually, this is kind of true. We know how often you open your emails, if you click on a link, and if you take action. This may seem creepy, but it’s standard information that nearly all email systems provide. And we’re trying to put the information to good use, by sending you only as many emails as you think is reasonable.

A note: Seattle Bike Blog is a fully independent news and opinion website. Cascade Bicycle Club is one of our advertisers, but their sponsorship does not impact our editorial coverage. Also, the club recently hired my partner Kelli to be their Volunteer Coordinator. Again, I intend to maintain my fair and honest coverage of the club.

This entry was posted in news and tagged cascade bicycle club, seattle times. Bookmark the permalink.

12 Responses to On Cascade’s strange day in the spotlight