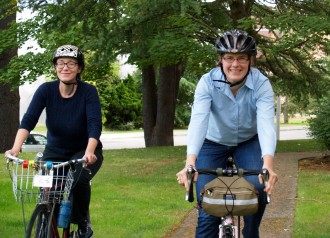 Big changes at Cascade Bicycle Club continue with no signs of slowing down.

We reported recently on departures of many staff members in the past year, and the club let two more high-level staffers go. Evan Manvel is no longer the club’s policy director, and M.J. Kelly is no longer the communications director.

The changes come as new Executive Director Elizabeth Kiker settles into her role at the head of the largest regional bike club in the nation.

Manvel was formerly with Portland’s BTA organization before taking the Cascade position a year ago. He oversaw a transitional period in the club’s history, with longtime director Chuck Ayers stepping down earlier this year and many members of the advocacy arm of the club leaving for positions in other non-profit organizations.

Kelly is a biking mom who has led the club’s media wing. She is often the person in front of the camera for TV news reports, making the case for safer streets for people of all abilities and ages. As such, I have worked closely with her in the three years writing this blog. She has been very supportive of my work and the growth of Seattle Bike Blog.

“We are reaching out to our networks and posting the jobs to try to get the positions filled immediately,” said Kiker, who could not comment on the specifics of the employment decisions. Kelly also declined to comment. I was unable to get in touch with Manvel.

Kiker emphasized that the changes do not represent a move away from advocacy, as some have reported in recent months.

But the club is poised to change dramatically in the near future. Half of the Board of Directors will be elected Tuesday, and their direction will shape the focus of the club as it rebuilds its advocacy wing and refocuses its resources. 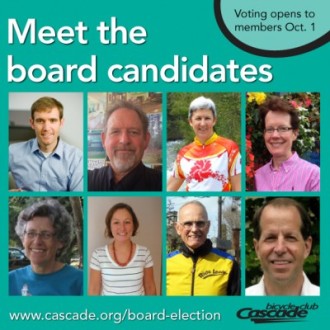 All Cascade members (which the club boasts is more than 15,000 people) are eligible to vote either online, by mail or in-person at Tuesday evening’s annual membership meeting at the REI flagship store. Online voting is open now. Details from Cascade:

There are three ways to vote:

Seattle Bike Blog is independent and typically stays out of Cascade’s internal workings unless it becomes a big enough deal to warrant coverage. There are bunch of people we like on the candidate list, but we have not done enough reporting to endorse a full slate of candidates for the Board. However, we definitely endorse the following principles:

Seattle Bike Blog can definitely endorse one person though: Merlin Rainwater, who is definitely the site’s all-time top reader and biggest fan. Merlin is also the only person who has been to more Seattle Bicycle Advisory Board meetings in the past three years than I have, so she is intimately versed in current issues facing people biking in Seattle and is extremely dedicated to the cause of making cycling safe and inviting for everyone.

Do you have any thoughts on other board members? Please use the comments below to discuss.