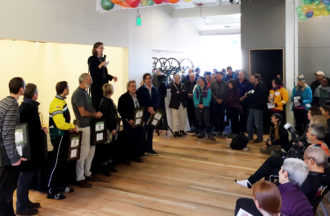 Elizabeth Kiker speaks at the opening of the Cascade Bicycling Center

Elizabeth Kiker has submitted her resignation as Executive Director of Cascade Bicycle Club and Washington Bikes. Her last day will be December 31.

“I’m proud of all that has been accomplished during my time at Cascade and Washington Bikes,” said Elizabeth in a prepared statement from Cascade (posted in full below). “We have talented and dedicated staff, board, members and partners that will achieve even greater fulfillment of our vision, bicycling for all, and our statewide mission of  improving lives through bicycling. We thank our members and supporters for their commitment to Cascade and Washington Bikes during this transition.”

Kiker was part of a wave of women in major leadership roles in bike-related organizations in the Seattle area. She oversaw some major remakes of the organization, including moving to a very fancy new office in Magnuson Park (moving the office by bike is still one of my favorite Cascade events ever) and merging with the statewide advocacy organization Washington Bikes.

The organization’s membership and education programming have both grown under her leadership, according to the organization’s statement. And major Cascade-supported funding efforts, like the Move Seattle Levy and ST3, have passed.

Seattle Bike Blog wishes her the best in her next venture.

Kiker took the reins of a very shaky Cascade three years ago following the publicly messy departure of longtime Executive Director Chuck Ayers. Before she arrived, the Cascade Board tried to fire Ayers, prompting a member revolt that forced a mass Board resignation. Cascade had grown immensely and had gotten its hands dirty with controversial political advocacy. There was a lot of debate about the political and advocacy role of the club, which makes much of its money through essentially non-political major events. Many staffers butted heads with Board members over the issue.

Major staff shakeups started before Kiker arrived, but they didn’t slow down after she took the position. Retaining talent has remained a challenge for the organization.

Most recently, Major Taylor Project founder Ed Ewing left, which was a big loss for the organization. Other education program and advocacy staff members have also left recently.

Kiker’s departure was not related to the election of Donald Trump, but the major political reshaping happening across the nation presents interesting terrain for the organization’s search for a new Executive Director. I would love to see the organization make social justice, equity and community partnerships central guiding principles for their work going forward. Maybe if they’re lucky Ed is still available…

Here’s the full statement from Cascade:

After over three years of inspiring leadership and accomplishment, Executive Director Elizabeth Kiker has decided to move on from Cascade Bicycle Club and Washington Bikes. Her last day will be Dec. 31, 2016. On behalf of the staff and board, please join us in wishing her all the best as she transitions to the next chapter in her career. Elizabeth had a tremendous positive effect on both Cascade Bicycle Club and Washington Bikes, and her departure will be a loss for both organizations.

“We owe Elizabeth an enormous debt for all she’s achieved in three short years,” said Board Vice President Nate Glissmeyer. “Even putting together a list of her successes was awe-inspiring. She’s made such an important difference for these organizations and for bicycling across the state.”

Elizabeth brought outstanding and energetic leadership to the organizations. Her can-do attitude led us to take on and succeed with projects that would have seemed impossible to many.

Elizabeth led a gigantic $2+ million capital campaign, taking us from a dusty, damp and cramped office into our new spacious location; she created a true Bicycling Center with a first-of-its-kind traffic garden, Fix-It Garage and Ride Leader Welcome Pavilion.

She led the orchestration of a successful merger, making Cascade and Washington Bikes the largest statewide bicycle nonprofits in the nation. With the development of new 5-year strategic plans for both organizations, we are poised for continued growth and success.

Under her leadership, Cascade membership grew dramatically from 15,000 to over 17,000 people across the state. We unveiled multiple new and successful major rides, including the Emerald City Bike Ride, which had more than 7,000+ participants in its first year, and expanded the variety in our rides to attract new types of riders.

We grew our education programming more than 50 percent statewide under Elizabeth’s leadership. We pushed the passage of the Move Seattle Levy, Sound Transit 3, Bellevue Transportation Levy, and multi-modal funding statewide. We increased the reach of the Major Taylor Project. We led the charge for significant Eastside Rail Corridor funding, Missing Link advocacy and so much more. We fostered positive partnerships with communities and organizations to help make biking more accessible and inclusive — a deeply personal commitment of Elizabeth’s — most recently in our partnership with King County Parks, the YES! Foundation and the White Center Community Development Association to launch the White Center Bike Playground.

“I’m proud of all that has been accomplished during my time at Cascade and Washington Bikes,” said Elizabeth. “We have talented and dedicated staff, board, members and partners that will achieve even g reater fulfillment of our vision, b icycling for all, and our statewide mission of improving lives through bicycling. We thank our members and supporters for their commitment to Cascade and Washington Bikes during this transition.”
We all feel so deeply fortunate to have benefited from Elizabeth’s strong and effective leadership over the past three years. We thank Elizabeth for building Cascade and Washington Bikes into the successful organizations they are today. She leaves a legacy that positions us for unparalleled growth and success.

(Disclosure: My spouse Kelli works at Cascade and WA Bikes.)