Interim Director: Cascade is not moving away from advocacy 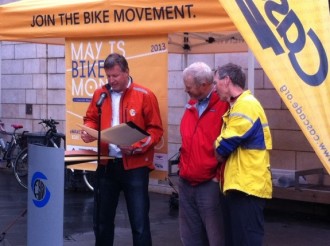 The Cascade Bicycle Club, whose longtime executive director Chuck Ayers announced he was leaving the group back in March, is still looking for a new leader, and six of its 14 board seats are up for reelection, sparking speculation that the group, may be changing direction—potentially moving away from advocacy and becoming more of a recreational riding group.

The blurb comes as the club is experiencing a large number of fairly high level staff vacancies. Max Hepp-Buchanan left to direct the young Bike Walk RVA in Richmond, Craig Benjamin left to return to Jackson, Wyoming to lead conservation efforts there, Stephanie Frans left to be with her family full-time and, of course, longtime Executive Director Chuck Ayers retired.

So the question is: Does this mean Cascade is moving away from advocacy and toward being more of a recreational riding group?

“If we’re getting away from advocacy, the recruitment and job descriptions don’t line up with that,” said Interim Director Joe Platzner. “Somebody should let us in on the secret.”

Platzner is a former aerospace executive and Cascade Board Member who is filling the director role during the search for a new permanent leader. He is not seeking the position himself and says the search is on-schedule and going well.

“I’m ridiculously optimistic at this point,” he said of the search. He would not say much more since it is still ongoing, but he said applicants came from all over the nonprofit and bicycling world.

Cascade has always had a little friction between members who think the club should just be a rides club and members who want the club to be pushing as hard as it can politically to improve cycling infrastructure. Turns out, not everyone who rides a bike agrees about everything (imagine that!). The club’s big rides (STP being the biggest) are huge money-makers for the group and help fund its advocacy efforts.

While the club is clearly in the midst of big changes, Platzner said he has not heard any talk of changing the balance of recreational rides and political advocacy. Instead, he said the board and staff see them as “synergistic.” More people biking means more people who are passionate about advocacy, he said.

They did boost their staff time dedicated to the club’s popular daily rides (they are on track to hold 2013 rides in 2013). The club recently hired David Lee to manage the rides and reach out to a diverse group of riders, “many of whom will become passionate advocates,” Platzner said.

The club also recently hired Evan Manvel to direct their policy, planning and government affairs and Brock Howell as their Policy and Government Affairs Manager. If the club were trying to downplay their political role, hiring someone from Futurewise who has worked on campaigns to save and increase transit, biking and walking funds and someone from Portland’s BTA advocacy group would be a strange way to do so.

I will be watching closely as Cascade shifts to new leadership. And I will absolutely call them out if I think they are dropping the ball on advocacy. After all, they are a well-funded bike club that can do things other groups can’t, and they have a responsibility to put their resources into expanding cycling in the region and making streets safer.

If you are a member, you can also help out by getting involved with the club’s board elections in October to make sure advocacy remains a key focus.

Founder and Editor of Seattle Bike Blog.
View all posts by Tom Fucoloro →
This entry was posted in news and tagged cascade bicycle club, joe platzner, publicola. Bookmark the permalink.

1 Response to Interim Director: Cascade is not moving away from advocacy