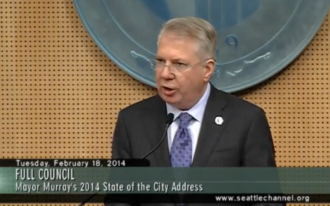 Mayor Ed Murray gave his first State of the City speech Tuesday in the City Council chambers, and he used the spotlight to announce progress on launching a public bike share system and cutting the current drive-alone commute rate in half.

“Seattle is one of only five cities where less than half of commuters are in single occupancy vehicles,” he said. Noting that “nearly half of our region’s carbon emissions come from transportation-related sources,” Murray said continuing to reduce the drive-alone commute rate “will have significant impact on our overall efforts to reduce climate change.”

His goal: 25 percent of Seattle residents driving alone to work.

To get there, Murray mentioned expanding the streetcar network, saving Metro funding, passing the Bike Master Plan (which he recently helped get back on track) and launching a bike share system.

“I will announce later this month, with some of our friends at Puget Sound Bike Share, an exciting new bike share program, with funding,” Murray said. “And it appears it will be the only one launched in 2014 in North America.”

We reported previously on troubles at Bixi, the Montreal-based company that supplies the bikes and docks Puget Sound Bike Share had hoped to use. Portland, Vancouver BC and Seattle were all slated to launch systems in 2014, but the supplier troubles have caused uncertainty and likely delays.

UPDATE: It’s not clear if Seattle will actually be the only system launched in North America this year. Systems continue to proliferate around the nation, including systems in Pheonix, Milwaukee, Philadelphia and others. Vancouver and Portland also appear to still be aiming for 2014 launches.

PSBS Director Holly Houser is currently in Montreal, and we should have more bike share updates soon.

Supporting more transportation choices in Seattle will certainly help people find better alternatives to driving alone, but what will it take to reach Murray’s 25 percent goal? A recent report from the city’s Comprehensive Plan update team shows that it took 20 years to go from 59 percent of Seattle residents driving alone to work down to 49 percent. Our goal in a 1994 plan was 35 percent by 2010 (hat tip to Matt Loar): 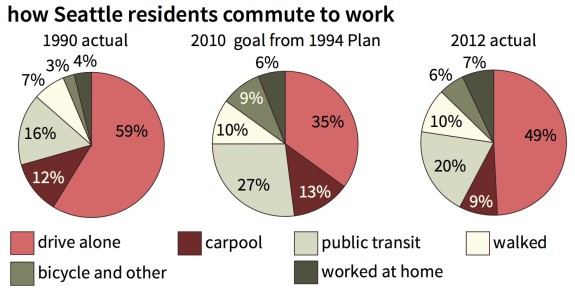 Getting down to 25 percent is going to take aggressive increases in job and housing density (more jobs near homes, and more homes near jobs), expansion of transit system capacity and frequency, improvements to walkability and, of course, investments in comfortable and connected bicycle routes.

“This spring we will engage in a citywide conversation about what Seattle wants from the department,” he said, noting that he hopes to “modernize” SDOT. He reiterated his campaign platform to create a “Move Seattle Plan” that “integrates plans for bikes, for freight, for cars, for transit, and for pedestrians.”

Mayor Murray’s 25 percent goal is exciting, but of course the real challenge will be finding permanent and significant funding for these needs. It will also involve making politically-challenging changes to our city’s streets. He is off to a great start with the Westlake agreement, but there’s a lot of work left to do.

You can watch video of his full speech below (transportation comes up at the 20:00 mark):

This entry was posted in news and tagged ed murray, move seattle, puget sound bike share, state of the city. Bookmark the permalink.