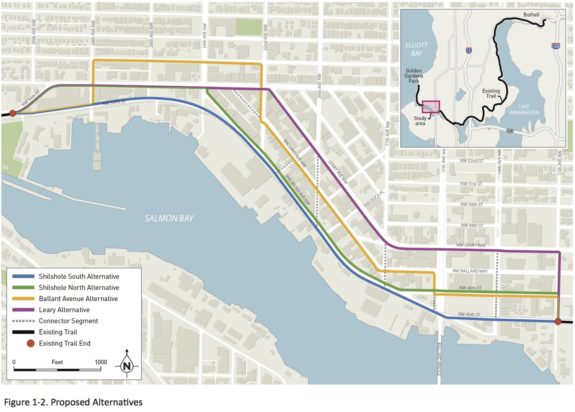 829 pages have been added to the already-towering mountain of documents studying the 1.2-mile Ballard Missing Link of the Burke-Gilman Trail.

The draft environmental impact statement (“DEIS”) is an exhaustive study of the project’s alternatives. It’s the same study you would need to build a freeway, which is total overkill for a short extension of a biking and walking trail. But project opponents have been able to successfully sue and delay the project long enough that completing the costly and time-consuming study was the city’s only option.

So what did it find? In short: Just build the damn trail already!

“Completing this section of the BGT has been discussed and analyzed since the late 1980s,” the study notes. It is beyond embarrassing that this has taken so long.

Hopefully, this will be among the last times you will need to weight in on this project, but nothing can be taken for granted with this trail. From the DEIS, it seems that whatever public debate may have once existed has long solidified in favor of a trail following the rail line just like the rest of the Burke-Gilman.

“Two themes were dominant in the comment letters: trail location and safety,” according to the document. “Shilshole Ave NW was the location most often indicated as preferred for the trail. When reasons were given for this preference, the most common reason was that it is the most direct route between the two ends of the existing BGT.”

That’s it. This isn’t hard, and it should not have required this exhaustive study. Make it direct, continuous and safe. That’s all the people want. But most importantly, stop talking and just build it already! 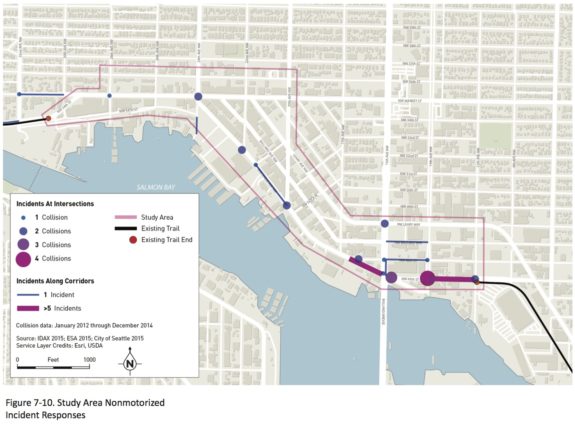 As is the standard process for an EIS, various alternatives are compared to a no-build option. And as we know all too horribly well, not building the trail would lead to completely unacceptable injury and possible death, mostly to people on bikes.

The map above notes only emergency responses to traffic incidents that did not involve a collision with another vehicle (there are plenty of those, too). And as you can see, the notoriously dangerous train tracks between the trail’s abrupt end near Fred Meyer and the Ballard historic district have claimed an enormous number of victims.

“Between January 2012 and December 2014, there were 45 incidents … along NW 45th St and Shilshole Ave NW, and at the intersections of NW 45th St/14th Ave NW and under the Ballard Bridge,” the study notes. “However, it is likely that additional incidents caused by roadway conditions occurred but were not recorded.”

So when we wrote one year ago that 18 people would go to the hospital by the time this study was complete, we were using inadequate data. The number is nearly double that at 34, plus an unknown number of unreported injuries.

Since the Seattle City Council first approved the Missing Link back in 2003, we have allowed an estimated 293 people to go to the hospital in just these couple blocks, some of whom have been left with lifelong injuries.

And the problem will only get worse the longer we wait, the study notes.

“If dedicated bicycle facilities are not provided to allow bicyclists to avoid or safely traverse areas with obstacles such as railroad tracks, the number of nonmotorized incidents is expected to increase as nonmotorized volumes increase in the study area.”

Just build the trail already! There is no debate left to have. This endless process is hurting people.

The basic Missing Link plan that has been under debate this whole time is now called the “Shilshole South Alternative.” Just build that one. It’s what we’ve already debated to death, and it remains the obvious choice.

But since planners went through all the hard work to study several options, let’s take a look at what they found (emphasis mine):

The Missing Link would improve safety for nonmotorized users and motor vehicles in the study area. A dedicated bicycle facility would improve the predictability of conflict points between motor vehicles and cyclists and reduce the likelihood of collisions because potential conflict points would be clearly identifiable by both motor vehicle drivers and trail users. Potential conflict points would be clearly organized and delineated, which would allow motor vehicle drivers and trail users to be aware of where to travel cautiously. A dedicated facility would also reduce the likelihood of nonmotorized injury incidents by providing a facility that safely traverses or avoids obstacles in the study area such as the railroad tracks. The Missing Link would be designed to clearly delineate trail user space from the roadway, and would include safety features such as buffers, pavement markings, raised crosswalks, curb treatments, signage, and lighting.

Shilshole South is also the only alternative that actually addressed the crash-prone area along NW 45th Street and under the Ballard Bridge.

But what about industrial businesses who have sued to prevent the trail’s impact on their truck movements?

That’s right, the trail would even help nearby businesses, some of which have been throwing big sums of money to delay this project in court. However, there is a catch:

At driveways, freight vehicles could be delayed from zero to 11 seconds.

Another option studied would travel along the north side of Shilshole, then turn down Market St before connecting with the west end of the trail at the Locks. It’s not awful, but it’s also not better than the south option.

It has more intersections to cross, all of which are places for potential conflicts. It also goes a bit out of the way by traveling on Market instead of following the rail line to the Locks. And by going out of the way to bypass the track dangers on NW 45th Street, this route would leave that area dangerous as it is today.

The Shilshole North route has gone through essentially no public outreach, so who knows what opposition or concerns will arise. And though it may technically complete the trail connection, it feels like a different project more about redesigning and better activating Market Street than being the Burke-Gilman Trail.

Here is the study’s summary of the option: 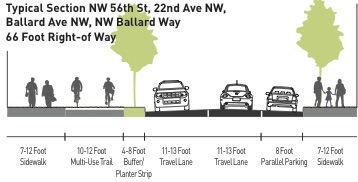 Maybe this isn’t the best place for a trail. Image: HMPinnsvinet via WikiMedia Commons.

The Ballard Ave option is definitely the strangest of the alternatives. While it would be the option that passes closest to the most businesses, Ballard Ave is already a slow, historic street with sections paved in brick. It is less direct than Shilshole and goes up a hill. It may not look like much on a map, but it would likely be enough to lead many people on bikes to just stick with dangerous Shilshole Ave instead.

In other works, it likely wouldn’t fix the problem.

Ballard Ave is also the home of various annual street festivals and a weekly, year-round farmers market, as the plan notes:

“The conflict between the BGT and the Farmers Market would be likely to decrease the recreational experience of both.”

Leary and Market a great idea for a different project

The final alternative was pushed by some of the longtime trail appellants. This is basically the “build it somewhere else” alternative. And, as such, it’s not a realistic alternative. No matter how safe the city makes Leary (a noble goal of its own), Shilshole and NW 45th Street will remain the most direct route, and the train tracks and freight conflicts will remain dangerous to the people who will inevitably choose to go that way.

That said, Leary Way and Market do need safety improvements. A complete streets project focused on serving everybody using these streets is a great idea. But that’s a totally different project than the Burke-Gilman Trail.

The Leary alternative would pass by 33 driveways and 13 intersections, far more than the Shilshole South alternative. The more delays and points of conflict, the more incentive people will have to just stick with navigating Shilshole as it is:

“While eight of these intersections are signalized, it is still possible that some trail users would find the route undesirable due to a perceived lack of safety when crossing these intersections,” the study says. “There may be increased trail user conflicts on the portions of the route adjacent to NW Market St as more pedestrians use the trail.”

Why not just tear up the tracks?

I get this question a lot. The tracks are almost abandoned, carrying about three trains per week a very short distance to Salmon Bay Sand and Gravel (one of the appellants). For good reason, Federal law protects rail use so long as there is some use of them. It would be pretty problematic if a single jurisdiction could take out the rails in the middle of line. A rail line that is missing a section is no longer a rail line.

So even though the trail use so obviously outweighs the very limited use of this stub rail line, it’s not within the city’s purview to tear out the tracks.

The Shilshole South alternative basically follows alongside the rail line like the the section in Frelard already does. It would be easier and cheaper to build on the rail line, but that’s not on the table. 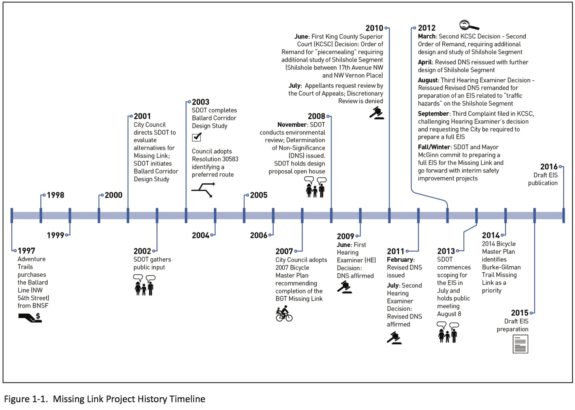 This Seattle Process joke isn’t funny. People are getting hurt the longer we wait.

The appellants have made it clear they don’t like the trail idea. But the vast majority of people want it. The appellants have won delays and now ever have their Leary/Market concept studied and on the record. Yet after all these years of delays, debates and studies, it’s still obvious that we should just build the trail along the rail line like the rest of the trail.

The study even shows that with the Shilshole South Alternative, freight delays would be either negligible or less than they are today. It would improve bike access to and from Ballard, which is good for Ballard businesses and residents. And it would prevent dozens of hospital-bound injuries every year.