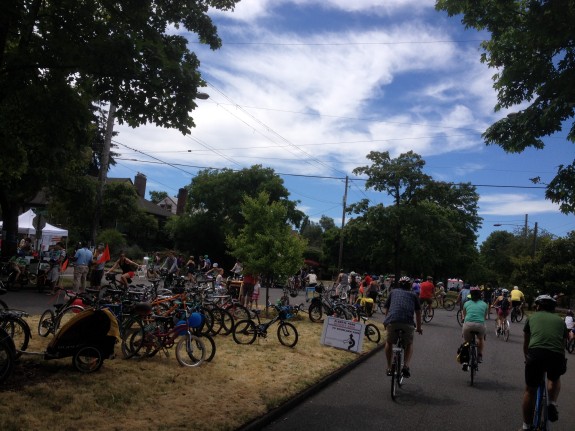 Now, imagine if next year Seattle combines the two ideas to create a series of neighborhood open street fairs connected to area parks by a miles-long loop of car-free neighborhood streets. If you just said to yourself, “Wow, that sounds awesome,” you are right.

The good news is that the city is considering events like this thanks to a helpful, not-so-subtle push by Seattle Neighborhood Greenways. I had the opportunity to join SNG members, Councilmember Sally Bagshaw, various city staff and Cascade Bicycle Club staff for a study trip to Northeast Portland’s Sunday Parkways event over the weekend. It was the second time I’ve been to a Sunday Parkways event there, but it’s still an overwhelmingly awesome thing to witness.

For those not familiar with Sunday Parkways, it’s basically a loop of mostly neighborhood streets (often neighborhood greenways) that, for a handful of hours, is car-free (see an old but good StreetFilm here). Held in different parts of the city throughout summer, each route connects city parks where there are street fairs and entertainment like music or free exercise classes or rock climbing.

And it is filled with tens of thousands of people of all ages cruising around and having a good time (imagine three STPs worth of people, except with way less lycra and way more kids on balance bikes). It may be one of the greatest community events ever created. 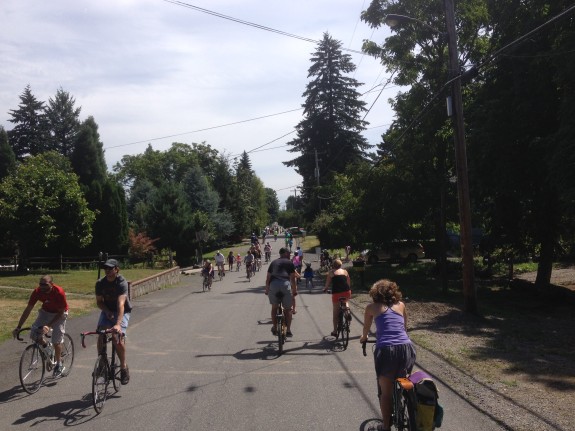 Bicycle Sunday is a great event that may have inspired other open streets events that have grown much larger than our humble car-free Lake Washington Boulevard. Bicycle Sunday basically turns a section of the street into the world’s greatest trail, and it’s always been popular and valuable, especially for the surrounding neighborhood. I don’t think the city should get rid of it.

But by copying the Bicycle Sunday idea and placing it in the middle of a neighborhood, it could become so much more than a wonderful trail along the water. It becomes about celebrating the center of the neighborhood, the places where people live and play and get groceries and go out to eat.

By “opening” neighborhood streets (closing them to cars), these events provide space for community to flourish. Kids get to bike in the middle of their streets and parents don’t have to worry about car traffic crossing at busy streets or passing their wobbly kids too closely. It’s as though the entire route has just become an extension of the parks they connect, as though the entire neighborhood were actually a big park for just a couple hours during the summer.

Neighbors get to know their own neighborhoods better, and people from other parts of the city get to know places they’ve never been. While biking around the route Sunday, I heard people over and over saying things like, “Wow, I’ve never been to this part of the city before. It’s awesome!”

Seattle already has experience with the street fair and open streets portions of a Sunday Parkways-style event, but the city has not put them together. But that’s exactly what should happen next summer.

Councilmember Bagshaw, who chairs the City Council’s Parks Committee, did not mince words on the trip. She loves the idea and wants to help make it happen in Seattle. Council Transportation Committee Chair Tom Rasmussen earlier this year expressed interest as well.

But it’s gonna take a lot of work and some extra cash to happen. It requires hundreds of volunteers to do things like control intersections and other jobs needed for the park and street fair elements. And it will probably require some police overtime pay to help with major intersections. Community outreach and marketing are also vital to making them a success, especially since it will be a bit different than the Summer Streets we are used to. 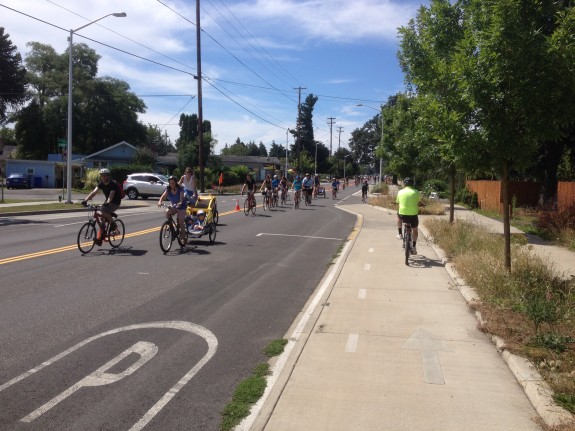 The events in Portland cost more than $100,000 each, and the city should aim to at least hold four in 2015. This will likely require some budgetary action this fall, and passing the Parks District proposition on your ballot right now certainly wouldn’t hurt.

With perhaps the exception of Alki (which is somewhat land-locked and is a packed event as is), the existing Summer Streets locations would be great places to start. Events in the far north end, southern West Seattle and central Seattle would also be perfect.

There is another more ambitious option the city could consider, either in addition to or instead of the Sunday Parkways concept: SEAclovia. Modeled after the massively-successful open streets events in countries like Columbia and Mexico, a Seattle “ciclovia” event (SEAclovia, get it?) would be a more ambitious car-free pathway on major boulevards through the city center. This would be streets like 1st Ave downtown and Rainier Ave rather than neighborhood streets.

SEAclovia would also more directly bring businesses into the fun by passing in front of their doors. CicLAvia in Low Angeles draws more than 100,000 people and has been a boon to businesses along the route both during and after then event (since people learn who and where they are).

Both the Sunday Parkways and Ciclovia models would be amazing in Seattle, and I can’t wait to take part in the next evolution of open streets in our city.