The first ever Seattle Summer Parkways was fun, but let’s go bigger in Ballard 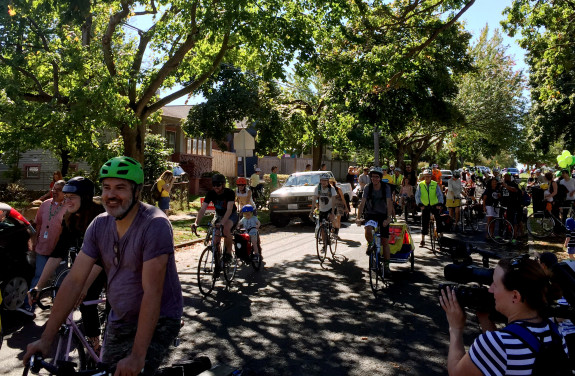 Seattle held its first ever Summer Parkways last weekend in the Central District. Three miles of residential streets linked several neighborhood parks in a car-light loop, encouraging people to bike, walk, scooter or use any other people-powered method to explore and have fun.

Parks were packed with programming, from free zumba classes to music to giant blow-up hamster-ball things (see photo below). Family Bike Seattle used the event as the headquarters for the Disaster Relief Trials, basically a fun cargo bike race and disaster preparedness drill that yours truly had a blast doing. So when the big one hits, I am fully equipped to save the whole city. Don’t even worry about it.

Mayor Ed Murray spoke at the start and especially thanked Cathy Tuttle of Seattle Neighborhood Greenways and City Councilmember Sally Bagshaw for being major forces pushing the city to get more ambitious about its neighborhood open streets events. 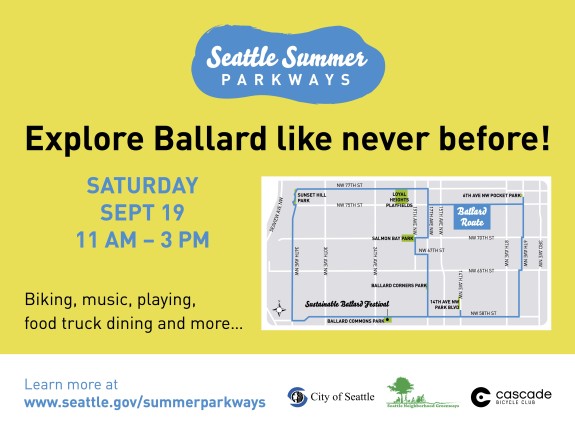 The second Summer Parkways event is in Ballard 11–3 this Saturday. It’s an awesome seven miles long. So bring the family and invite your friends. 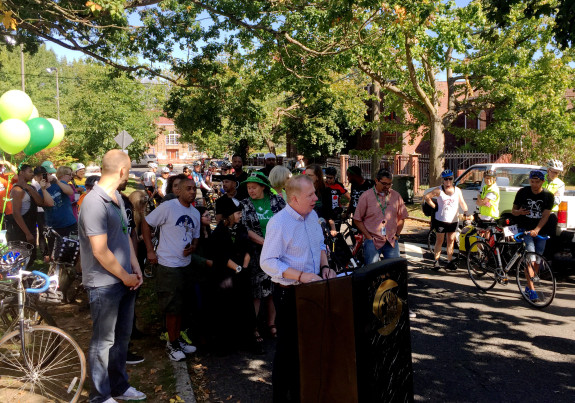 Murray was flanked by members of Brake the Cycle, a relatively new bike group sporting shirts that said “stop gentrification” on their backs. There’s no way that an event like this could happen in the CD without gentrification being an issue front-and-center. It was cool to see people out making the event their own. That’s what should happen at an open streets event. It should be like a big linear park, and good parks showcase community and foster conversation about the issues we need to be talking about. 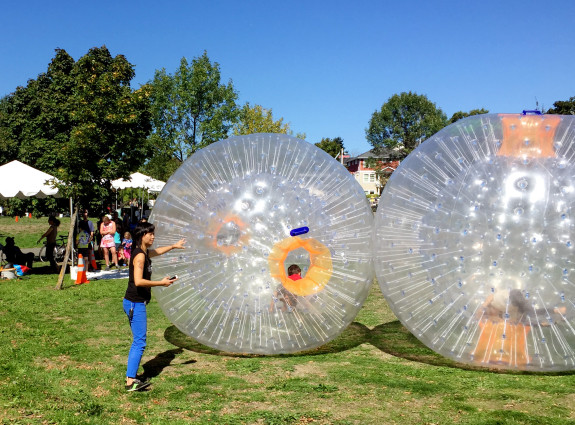 Summer Parkways is an attempt to expand the former Summer Streets events from being fairly short street fairs to being bigger and neighborhood-wide. In a way, it takes the city’s nearly half-century success with Bicycle Sundays on Lake Washington Boulevard and mashes it up with Summer Streets. So you get several big park and block parties tied together by a loop of car-free streets safe for people of all ages to play and move. 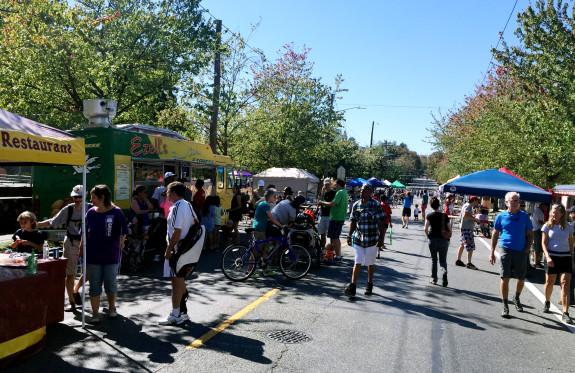 For one afternoon, Catfish Corner was back on Cherry Street.

In Portland, each of their Summer Parkways events draw tens of thousands of people, and Seattle’s program was modeled on their success.

But as fun as the CD event was, there is still a lot of work to do to reach Portland’s amazing and packed Parkways events. Though I have not yet received a count from the city (if they even did one. UPDATE: SDOT says they estimate “more than 500” participants), it was likely a mere fraction of the turnout Portland typically draws.

Outside already-engaged bike communities, there was not much buzz about the event in the days leading up to it (if you sensed a little desperation in my post last week, that’s because I sensed that not enough people were talking about it). Though people who follow Seattle Bike Blog could hardly have missed news about Summer Parkways (I’ve been writing about it for a long time), an event like this has appeal to a very wide range of people. Basically, if you like parks and community festivals, Summer Parkways is for you.

But marketing outreach and advertising seemed limited (though, full disclosure, Summer Parkways is advertising on Seattle Bike Blog). Capitol Hill Seattle wrote about it, but pre-event news coverage didn’t get much further than that. Three miles of streets look deserted without a ton of people participating. It’s like an arena rock show that draws 1,000 people: That’s a good crowd, but it looks like nothing in a venue built for 20,000.

So I hope planners go all in on promotions for the Ballard event. It’s an exciting feel-good story for major regional media outlets to cover. For four hours, Seattle’s largest-ever park will be in Ballard Saturday!

Another lesson from the first event: Route closures need to be serious and well-staffed. At the top of this post, I called the streets “car-light.” But they’re supposed to be car-free. There were way too many people driving on the course. This defeats the whole purpose. An event like this should be safe for kids to go out and bike or scooter or draw with chalk in the middle of the street where they usually aren’t allowed. And it should be safe for people who are interested in biking, but want to try it without worrying about cars.

There are some fairly simple fixes for traffic control ahead of the Ballard event. I’ve heard several great ideas through emails from Summer Parkways and Seattle Neighborhood Greenways volunteers — especially Eli Goldberg, who not impressed by the execution of the event. Closed intersections should be protected by wide barriers that have to be moved for cars to get through (people who live on the street are allowed to drive slowly to access their homes, guided by a volunteer). A simple sign in the street isn’t enough, since people will just drive around them without waiting to hear what a volunteer has to say.

Posting signage one block before the closure would also allow people to more easily detour without ever reaching the event route. Having suggested detour options handy would also help, both in the signage and for volunteers helping people get around the route. Typically, this just means driving down to the nearest busy street and crossing the route there.

And those busy street crossings must have crossing guards. It doesn’t matter if they are construction professionals or school crossing guards or police officers, but they can’t be absent or just standing nearby. Remember, little kids need to be able to navigate the route safely. I know how to wait for a break in traffic to cross Cherry Street or Yesler Way, but I’m an experienced bike-riding adult. Experienced adults are not the target safety goal for an open streets event like this. Someone with authority to walk out and stop traffic is needed for every busy street crossing.

All these safety issues would also be addressed better with more participants. Once there are enough people biking and walking and scootering, there’s a safety in numbers effect where driving on the course seems less desirable and where crossing busy streets happens visibly and en masse. This is where you come in. Come to Ballard Saturday! And invite all your friends!

Volunteering should also be fun and part of the community-building goal of the whole event. Volunteers are doing something totally cool by personally enabling this temporary park to exist. But several volunteers Saturday were stressed from trying to stop people from driving on the course. And their four-hour shifts lasted the whole event, so they didn’t get to enjoy the event they helped put on. But these issues could be eased by the improved barriers and by giving people a break at least to give the route a spin.

And, of course, these issues would be easier to address with more volunteers. You can sign up to help out at the Ballard event by emailing [email protected] or you can try navigating Cascade Bicycle Club’s truly awful online registration system here (but if you get frustrated by the system, just email instead).

The good news is that all these issues are fixable. Any event this big is going to have a lot of lessons learned. I can’t wait for Ballard’s Summer Parkways Saturday. See you there?

12 Responses to The first ever Seattle Summer Parkways was fun, but let’s go bigger in Ballard