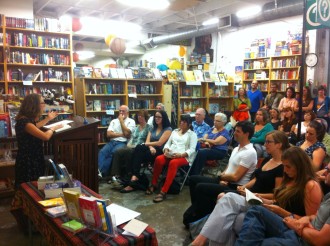 Kelli reading at Powell’s on Hawthorne in Portland

I am in Portland, the first stop on a multimodal book tour I am taking for the next couple weeks with my partner Kelli Refer. She is promoting her book Pedal, Stretch, Breathe: The Yoga of Bicycling, which just arrived from the printer.

Our goal is to travel all around the Pacific Northwest combining trains, buses, ferries and, of course, bicycles to make for an efficient, fun and affordable tour. I’ll be updating periodically on how our multimodal travels go and posting some thoughts of lessons for Seattle from the various towns on the tour itinerary.

Speaking of which, here’s the schedule of events:

8/26 Portland, OR
Powell’s on Hawthorne

I will still be writing regular bike news here during our trip. But it does mean that it would be an extra huge help if you send tips, photos and other notes our way (email [email protected]). In fact, you could even help keep people updated by posting in our brand new Seattle Bike Forum. 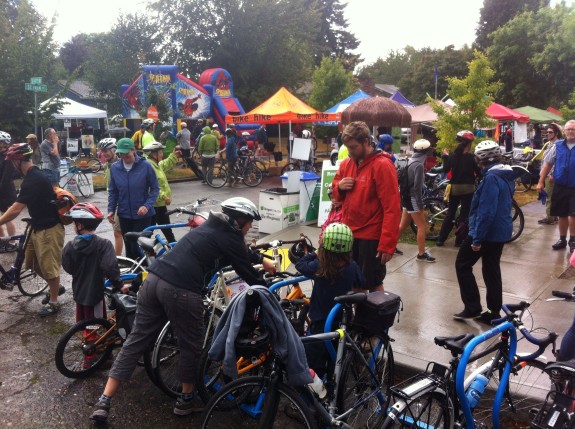 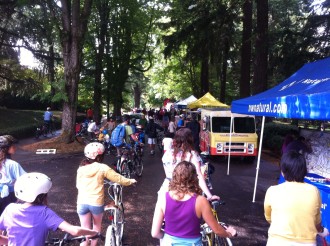 We just happened to be in town for Sunday Parkways in Southeast Portland, typically the largest of the city’s open streets events. However, the event kicked off to what I assumed would be a huge bummer: It rained almost the entire time.

But wow, it was incredible how packed the streets were. Bike traffic jams, people of all ages biking through the mostly residential streets that made up the open streets loop, all unfazed in the pouring rain.

Portland’s Sunday Parkways are sort of like a mash-up of Seattle’s Summer Streets and Bicycle Sunday events. A loop of mostly residential streets are closed to motor vehicles throughout a neighborhood and opened to fun and games of all kinds. People play music, kids sell lemonade, fitness instructors lead free zumba or yoga classes, and much much more. Sections of the loop a filled with vendors and information booths, and businesses near the route embrace the never-ending stream of people flowing by on foot and bike.

The routes range from 7 to 9.5 miles, and all busy intersections are controlled by police officers. The cost to the city per event varies depending on private sponsorships, vendor permits, length of the route and more. In 2011, each event cost about $100,000 to put on, and the city of Portland paid just over half of that. Imagine if Seattle could find a corporate sponsor to front even more of the cost…

It’s hard to quantify the value of Sunday Parkways, but it’s obviously much higher than the cost. For one afternoon, a neighborhood gets a loop of streets that are more comfortable for biking and walking than the Burke-Gilman Trail. And, like the Burke-Gilman, the events attract people who are not comfortable or interested in biking on streets with cars.

Tons of people are not only getting exercise, they are learning how to be more comfortable on a bike and how easy it is to get around the city on two wheels. They are also becoming familiar with the city’s impressive network of neighborhood greenways. How many of these participants do start cycling regularly? How many people are seeing parts of their city off the major driving streets that they have never seen before? The joy and camaraderie alone make the event a huge success.

To get those creative juices flowing, here’s an example of a possible Ballard Parkways route that I just made up using the Ballard Greenways proposed routes (it’s about six miles long). Imagine this on a Sunday during the farmer’s market: