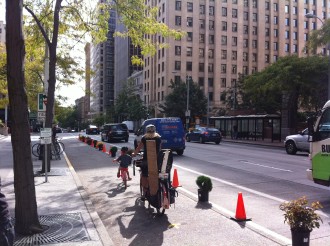 Want people of all ages and abilities to feel comfortable cycling downtown? Ed Murray could make it happen.

We reported recently on the City Council’s proposal to add $1 million to the 2014 budget. If approved, the change would accelerate design of miles of protected bike lanes and walking safety improvements downtown and put the city on track to finish construction in 2015.

The Seattle Times’ Jonathan Martin — who endorsed Ed Murray and has written several times in support of city bike investments — writes in a column this week that the downtown bike lane plans could be Ed Murray’s “first big bike test.”

A safe and inviting network of bike lanes protected from traffic (also called “cycle tracks”) has strong support on the City Council and have proven to dramatically increase safety for all road users (on foot, bikes and cars) in other cities where they have been implemented.

Ed Murray stated during the campaign that he supports protected bike lanes in general, but the downtown plans will be the city’s most ambitious bike lane projects to date. With tons of employers, retail shops and housing sharing the same few streets, conversations about rebalancing transportation needs are certain to be “robust,” as City Council Transportation Chair Tom Rasmussen put it to Martin.

But major employers like Amazon strongly support the city’s plans for protected bike lanes, and the Downtown Seattle Association has taken an active role in promoting the idea to their members. If Murray can bring any remaining parties together to build consensus and support for dramatically improving walking and biking downtown, he could find himself cutting the ribbon on a project that will revolutionize life downtown.

But, of course, that is no small feat, and doing so is certain to frustrate people who voted for Murray believing he would push back against bike lanes that became symbolic of Mike McGinn’s tenure.

But Murray is in for an early test of his stated support for cycle tracks (bike lanes physically separated from traffic) thanks to the Seattle City Council. On Monday, when the council votes on the 2014 budget, it will include $1 million to speed up planning on a cross-downtown cycle track. That puts the project on a downhill slope toward a 2015 launch date, with the wind of the City Council at its back.

It should be a top priority because the current 2nd Avenue bike lane is an “egregious example of a poorly designed bike lane,” bicycle policy expert John Pucher wrote in a widely-noted Seattle Times guest column last summer. True urban bike infrastructure has quickly become a necessary urban amenity for creative-class industries (Chicago Mayor Rahm Emanuel famously boasted about stealing jobs from Seattle with better bike lanes, according to DC.StreetsBlog.org). The current downtown bike infrastructure also puts the city at cross-purposes because it is supporting a roll-out in early 2014 of a bike-share program that may expose users to dangerous lanes.

Any added protection for existing bike lanes on 2nd and/or 4th Avenues — likely candidates for improvements — would almost certainly require a reduction in either on-street parking or existing travel lanes. The trade off would result in a dramatically safer environment for crossing the street on foot, reductions in car crashes and big increases in bike use by everyday people who either find today’s downtown too intimidating and dangerous or who never even considered biking before.

Martin asked Murray’s crew about the downtown bike lanes, but they simply reiterated his campaign pledge to create a general transportation plan for the city:

When I suggested that this sounded like he was undercutting the Bike Master Plan, [Murray transition spokesperson Jeff] Reading objected.

“Ed understands (bicycling) is a way people move around,” he said. “Ed wants to move away from one mode (of transportation) against another, pitting advocates against each other.”