Where should Seattle create a pedestrian plaza next? 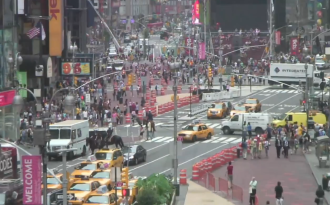 Screenshot from StreetFilms (watch below)

What did New York do in Times Square? Essentially, they had an area where so many people want to walk and hang out that they actually could not all fit on the sidewalks. Children were a rare sight, and people in wheelchairs and walkers had a particularly awful time trying to get around. Yet there was a ton of space reserved for cars, which spent most their time barely moving in the city’s iconic gridlock. So half a decade ago, the city did something unimaginable: They closed a part of Broadway to cars and reimagined it as an expanded public space. The result has been a success by essentially every measure, including traffic flow.

Here’s a great StreetFilms video about it:

And while Times Square is exceptional in the scale of its popularity and fame, the need for more public space at desirable intersections exists to varying degrees in every city including Seattle. The city has some good pedestrian plazas, like at 1st and Yesler or McGraw Square, but there are many areas that could use them as well.

So let’s brainstorm: Where in Seattle might a public plaza have the biggest impact on street life and comfort?

There are many spots in Seattle where the existing demand for space to walk and hang out is thwarted by overly-huge or complicated street intersections or where the demand for public space outweighs the traffic flow on a nearby street.

Below are some options we here at Seattle Bike Blog can think of off the top of our heads. Some would be big and bold projects, while others could be small and simple. This is by no means meant to be exhaustive, and all these might not actually be worth pursuing after further investigation. But it’s a start to get ideas flowing. Which ideas do you like best? Any locations we missed? Let us know the comments.

Here’s a map of our locations:

51 Responses to Where should Seattle create a pedestrian plaza next?