Pick for Transportation Director was bike-friendly leader in Chicago, DC 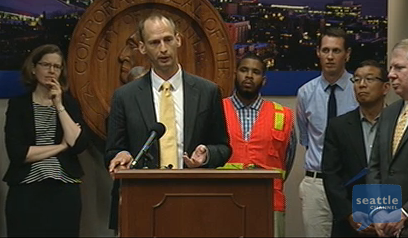 Seattle’s pick for Department of Transportation Director is Scott Kubly, who worked in Chicago and Washington DC during some very bike-friendly years for those cities.

He has also been closely involved with bike share system in those cities, which could be great experience to have as Pronto Cycle Share launches here. He is currently acting president at Alta Bicycle Share, the company contracted by Pronto.

“Scott is the visionary who will give transportation in Seattle the leadership it needs,” Mayor Ed Murray said during a press event introducing Kubly Wednesday. If confirmed by the City Council, Kubly will be the first permanent SDOT Director since Peter Hahn was swept out with the McGinn administration. Goran Sparrman has served as the Interim Director.

Kubly said Seattle’s challenge is to give people more options so people can continue to get around during a period of significant growth.

“We’ll give people choices, very attractive choices,” Kubly said at the press event. “People will chose to walk, bike and take transit because it is the most attractive to them.”

Kubly is clearly proud of the bike projects he has helped make happen, including a major role in launching Divvy in Chicago and expanding DC’s Capital Bikeshare. He also talked about creating protected bike lanes “for Seattleites 8-80” years old.

We praised Chicago back in 2012 for being so proactive and efficient when installing protected bike lanes. While Seattle was debating them to death while leaving our streets dangerous and uncomfortable, Chicago was building miles and miles of low-cost protected lanes. Our post caught the eye of Mayor Rahm Emanuel, who said, “I want them [Seattle and Portland] to be envious because I expect not only to take all of their bikers but I also want all the jobs that come with this.”

Well, joke’s on Rahm. We took his transportation guy.

Joking aside, Kubly was very well-informed and energetic during the meeting. He has experience from two very dense US cities that will be invaluable for Seattle as it continues to add huge numbers of residents.

He also had great, refreshingly common sense answers for questions about people who drive and don’t like seeing new bike lanes or money spent on transit.

“It’s not really about a ‘war on cars’ at all,” he said, citing the tired trope. “That makes for a good headline, I suppose, but it’s about giving people choices … Investing in one mode isn’t at the expense of the other.”

And what about bike lanes?

“When you invest in bike lanes, you really make the road safe for all users,” he said.

And no, he’s not all about bikes. He talked about road maintenance, like repaving and filling potholes, as a DOT’s “bread and butter.” He and Murray also talked about the need for freight mobility in a port-dependent city like Seattle.

Can we hire him already? Well, the City Council still needs to approve him, though Transportation Committee Chair Tom Rasmussen was on the selection committee and is in full support. He could start by the end of July if all goes according to schedule.

UPDATE: Quote from Cascade Bicycle Club on the choice (that’s ED Elizabeth Kiker left of Kubly in the photo above):

“Mr. Kubly has proven himself time and again to be an ally of bicycling, walking and transit,” said Elizabeth Kiker, Executive Director of the Cascade Bicycle Club. “With the implementation of the Bicycle Master Plan and Pronto! Emerald City Cycle Share on the horizon, we’re glad to have such an experienced, capable public servant leading the way.”

“Seattle is growing incredibly fast,” said Kubly. “To accommodate that growth and preserve the city’s great quality of life, we need a transportation system that doesn’t just get the basics right like freight mobility and safety, but that also invests in new, high quality transit, bikeshare, new bike lanes for Seattleites from 8 to 80 to ride in, and improving the pedestrian experience throughout the city. It also means creating an environment in which the private sector can provide transportation services that complement the public transportation network.  This means creating an environment that allows transportation network companies and taxis to thrive, carsharing to expand, or for new types of transportation services to evolve. The fact is, people aren’t tied to individual transportation modes, they’re tied to outcomes – and we must continue bringing forward options that will deliver the positive outcomes they need and expect.”

“Scott is the right person with the right temperament and the right talent-set to move us beyond picking winners and losers between pedestrians, bikes, transit, roads and freight, and instead lead the integration and prioritization of our many planning needs into one comprehensive Move Seattle plan,” Murray said.

Kubly is currently the acting president at Alta Bicycle Share, the largest bikeshare operator in North America. His previous roles include deputy commissioner of the City of Chicago Department of Transportation, associate director of the District of Columbia Department of Transportation, and planning manager roles at the Office of the Mayor in Washington, D.C. and the Washington Metropolitan Area Transit Authority. Kubly is a graduate of the University of Missouri. He holds an MS in Community and Regional Planning from the University of Texas and a MBA from the Wharton School at the University of Pennsylvania.

“Seattle needs a transportation director who recognizes the importance of a balanced transportation system and can help guide our city’s transition from auto-dependence,” said City Council Transportation Committee Chair Tom Rasmussen. “Mr. Kubly’s experience in Chicago and Washington, D.C. shows a commitment to accomplishing just that. I look forward to our discussions with Mr. Kubly over the next several weeks. I also encourage the public to participate in the confirmation process.”

“Scott’s experience and values matches up very well with the themes we heard from over 30 community advisory committee members representing over 30 stakeholder groups, 350 comments received from the community through our on-line outreach, and input received from a citywide neighborhood summit,” said John Okomoto, co-chair of the Search Committee that conducted the search process for the next SDOT director. “The selection committee was impressed with his innovation and creativity, transportation integration, and mix of project experiences.”

“Scott and I have worked together in Washington, D.C. and Chicago and he was one of the best hires I made,” said Gabe Klein former transportation commissioner of Chicago. “From innovative finance to transit planning, and making active transportation a primary focus and mode of transportation, Scott has a deep understanding of the challenges, the solutions, and has the ability to execute and get the job done which is the key.”

“I have worked with Scott in various capacities over the past 10 years,” said Leah Treat, director of the Portland Bureau of Transportation. “Most recently, in Chicago, Scott and I served side by side as deputies to Commissioner Gabe Klein. Scott will be a strong visionary leader for Seattle, bringing a unique blend of project management, financial acumen and innovative thinking developed over the years in both transit and transportation agencies. Scott will take calculated risks and pilot new techniques in an effort to deliver high quality services and maximize resources. Seattle is lucky to have attracted his talent to the Pacific Northwest.”

“When he was leading our city’s efforts to create a streetcar program, Scott Kubly fully engaged the business community so that we became willing partners in both helping to plan and implement a new system of public transportation for DC,” said Richard Bradley, president and CEO of the Downtown D.C. Business Improvement District. “He understood the needs and concerns of the business community, as he did other communities of interest in our city, and was responsive to these issues. I think he has the potential to deliver both outstanding leadership as well as dedicated professional management to Seattle’s Department of Transportation.”

The Seattle Department of Transportation’s mission is “to create and maintain for Seattle a safe and reliable transportation system which enhances neighborhoods, the environment and the economy.” Everything the department does is aimed at enhancing mobility within the city; this department has as its vision “to be the most innovative and responsive transportation agency in the region.” The viability of Seattle’s neighborhoods and the health of our region’s economy are dependent upon access and mobility.

The Director of Transportation reports to the Mayor and has management oversight of more than 750 employees and an annual operating budget of more than $400 million.

Kubly will start on July 28 and will earn an annual salary of $180,000. This position is subject to Council confirmation.

Founder and Editor of Seattle Bike Blog.
View all posts by Tom Fucoloro →
This entry was posted in news and tagged ed murray, scott kubly, sdot. Bookmark the permalink.

12 Responses to Pick for Transportation Director was bike-friendly leader in Chicago, DC