SDOT Director calls BS on the “war on cars,” has ideas for more resilient transportation system 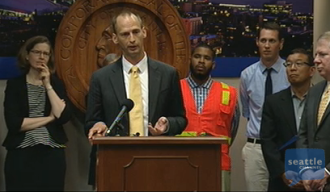 Kubly introduces himself, from Seattle Channel

Incoming SDOT Director Scott Kubly continues to make a strong introduction to Seattle, and he recently dove deeper into his views on Seattle’s transportation challenges with Ansel Herz at the Stranger. Kubly explains why a growing city needs more transportation choices and pretty much puts to shame the entire idea that making streets work better for transit, walking and biking is somehow a “war on cars.”

Below is my favorite bit of should-have-been-obvious perspective Kubly brings to the Seattle transportation conversation. This is the framing we should use to make all our regional and city-wide transportation decisions, but it is far too rarely used. Kubly via Slog:

You’ve got a city that’s growing tremendously fast. You see it in all parts of the city. That’s a really good thing, but what it does is it puts stress on the transportation system. And this transportation system is pretty fragile. You can have one incident that sends the entire system into gridlock if it’s in the wrong place in the network.

This is exactly why investing in better transportation choices is so important. If someone crashes on I-5 or 99 anywhere within a handful of miles or so of the city center, our regional and cross-city transportation network collapses. And, of course, the mangled body of somebody’s husband, daughter, or grandmother is often the cause of the city-stopping delays. We pay a huge social, emotional and financial cost to keep this fragile car-dependent system moving.

Kubly comes to Seattle after working for forward-thinking transportation departments in Washington DC and Chicago, and he sees a city growing quickly that depends on a fragile highway system that cannot grow any further. So when he talks about investing in transportation choices like transit, walking and biking, he’s talking about finding ways to allow more and more people and goods to get around without needing to relay solely on the highway system. Again, from Slog:

But I don’t think there are many people satisfied with the level of congestion downtown. So I’d like to move it faster. Fundamentally, what it boils down to is choices. So in city after city, when you provide people choices that are walking or taking transit, biking or carpooling, people wind up taking those. DC has done a great job of investing in transportation choices, whether it’s bus or train or bike or walking or the pedestrian environment. They’ve added 75,000 residents over the past 15 years and car registrations have dropped by 3,000.

And Kubly fully rejects the idea that changes that make it easier to bike, walk or take transit are somehow attacks on people who drive:

So, I think the War on Cars narrative is not unique to Seattle. You see it in a lot of different cities, that kind of rhetoric. I think it may have been coined by Rob Ford. And I’m being serious, I think it was coined by Rob Ford [laughs]. But I don’t think it reflects the reality of what it takes to have a transportation system.

And as for a radio shock jock using the phrase “war on cars” to describe the city’s temporary ban on right turns at Dexter and Mercer, Kubly made it clear that safety is his top priority:

Safety, for every department of transportation, is going to be the number-one priority. And we should not accept a fatality as a byproduct of our commute.

So far, Kubly is saying all the right things, and he seems to have strong political backing from the mayor and City Council. But the hard part is still yet to come: Making it happen.

Oh, and what does he think about the pending launch of Pronto Cycle Share?

I think bike share is one of the smartest investments a city can make in transportation.

This entry was posted in news and tagged ansel herz, scott kubly, sdot, the stranger. Bookmark the permalink.

14 Responses to SDOT Director calls BS on the “war on cars,” has ideas for more resilient transportation system