If Holman Road is a ‘complete street,’ then that term has lost all meaning 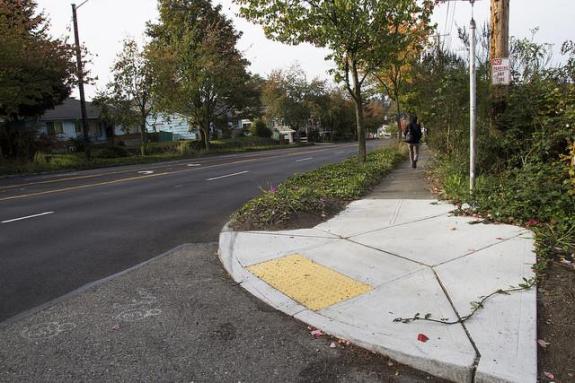 I received a troubling press release today from SDOT. In announcing the completion of the 1.4-mile, $3.8 million Holman Road repaving project, the department and Director Scott Kubly repeatedly refer to the street as a “complete street.”

If Holman Road is a complete street, then that term means nothing.

Holman Road is a busy, mean, wide, fast and uncomfortable street the slices off Crown Hill from the rest of the city. It may be the worst street in Northwest Seattle, a four-to-five-lane car sewer cutting a diagonal across the neighborhood street grid and demolishing all walkability and bikeability in the area.

When the city decided against utilizing this repaving project as a chance to complete a safe streets redesign or a chance to revolutionize biking in Crown Hill and Northwest Seattle by installing bike lanes, they lost the right to call this a “complete street.”

Holman was and still is all about moving cars quickly at any expense, including safety of people walking and biking. Building two new pedestrian refuge islands in the middle of a terrifying highway-style road in no way makes this a complete street. That’s like rebuilding a trench full of crocodiles in the middle of a neighborhood, but hanging a few rickety rope-and-plank bridges across it and calling it a success for walking safety.

Installing ADA-compliant curb ramps also does not count. They legally had to do that (though DOTs are good at finding loopholes if they really want to skip this step).

“With new pavement, sidewalks, curb ramps and transit stops, this Complete Streets project has something for every roadway user,” said Kubly in a press release. I have a feeling he has not actually gone out and tried to bike on this street, because there’s no way to claim this has made the street significantly better for people biking (give him a break, he’s still new?).

We argued several times during the creation of the Bike Master Plan update that Holman Road needed to be included. It was not. A look at a map of bike commuting rates in the city shows that Holman might as well be a row of bike tire spikes. Bike rates a few blocks south of the road are strong, while rates a few blocks north are dismal. Holman is clearly a giant impediment to biking.

Of course, it would not be super easy to make Holman a true complete street given the transit and freight loads it needs to carry. It would require a lot of hard work, public outreach and some creative design work. But the city effectively opted to just not even try, and that’s why calling this a “complete street” now is so troubling.

Some good folks at SDOT did try to paste a few small improvements onto this monster. But that is all just window dressing if the core of the street remains a highway-style roadway through an urban neighborhood.

Complete streets are about creating places that are safe and comfortable for everyone, no matter how they get around. It’s a powerful vision of hope that we really can build cities and neighborhood where the threat of traffic death and injury does not constantly loom over everyone’s heads. Where biking and walking is so comfortable that most people don’t feel the need to drive just to get to the grocery store or the park. Where people with mobility issues feel comfortable crossing the street even though they can’t move as quickly as some other folks.

Holman Road fails by every one of these measures. It’s more of the same problem, repaving the road engineering mistakes of the last century. Rather than praising this work, SDOT needs to be looking at how it happened so it doesn’t happen again.

After a busy eight months, Holman Road NW Paving Project construction is now complete. In a major roadway enhancement, the Seattle Department of Transportation (SDOT) repaved 1.4 miles of Holman Road NW and made pedestrian and transit improvements all the way from Greenwood Avenue N to NW 87th Street.

Said SDOT Director Scott Kubly, “We are pleased to deliver the Crown Hill neighborhood’s new roadway just in time for the holidays. With new pavement, sidewalks, curb ramps and transit stops, this Complete Streets project has something for every roadway user.”

As part of the paving project, the Holman Road Bridge at 8th Avenue NW also received new bridge expansion joints and waterproofing. Additionally, temporary wheel stops were installed on Mary Avenue NW and NW 92nd Street to provide a safer route for pedestrians and bicyclists during and after construction. The location is slated for a Safe Routes to School project, with a new sidewalk currently in design and planned for construction in 2016.

Residents and drivers can expect regular traffic flows to resume over the next several weeks. The construction contractor will complete finishing touches such as landscaping with minor effects to traffic over that timeframe.

Funding for this project came from a federal Surface Transportation Program preservation grant of $1.1 million and Bridging the Gap funding of $2.7 million. More information about the paving and Safe Routes to School projects can be found on the project web page: http://www.seattle.gov/transportation/pave_holman.htm.

46 Responses to If Holman Road is a ‘complete street,’ then that term has lost all meaning