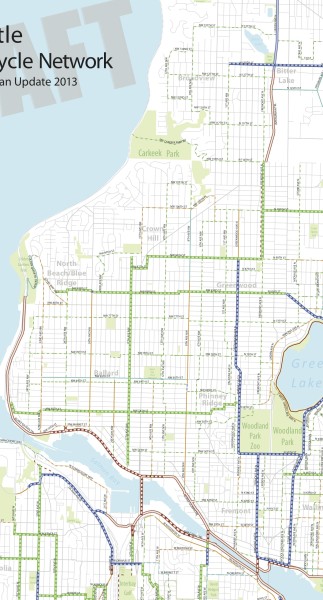 The biggest disappointment in the newest draft is deletion of a quality bike facility on Market Street. While a NW 58th Street neighborhood greenway will be useful for people in the neighborhood north of Market, there are no plans to help the vast numbers of people biking to the many Market St destinations from the Burke-Gilman Trail and Ballard Ave.

Speaking of Ballard Ave, there must be some creative options to help make that street even more biking and walking friendly.

In Fremont, one of the city’s bikiest neighborhoods, the plan leaves a lot to be desired.

It’s great to see an upgraded bike facility planned for Fremont Ave as well as improvements across the Fremont Bridge.

N 36th Street is a great candidate for a safe bikeway. It is packed with destinations, is very wide and the long blocks make it difficult to access business from side streets.

The lack of a facility on 38th/Bridge Way is a huge oversight. There is plenty of room to work with, and it is one of the only Aurora crossings along the seemingly never-ending climb up Fremont’s hill. There are also opportunities to make it safer to access the Aurora Bridge sidewalks.

36th Ave between Fremont Ave and Stone Way (passing by the Troll) is also a great candidate for a bike route, mainly because the Troll is a great location for a street closure of some kind. People already pour out into the traffic circle when visiting, and it seems silly we still allow traffic to move through there when the demand for people space is so overwhelming.

41st doesn’t cut it as a bike route across Aurora because it requires a stair climb and a very steep hill on the east side. Also, the runnel is essentially unusable on the staircase (though this could perhaps be improved). It’s fine for including in a neighborhood greenway plan, since it is a good walking route, but it should be removed from any bike plan calculations that count it as an Aurora crossing.

There are immense opportunities for a crossing at N 46th Street. There’s a lot of room, and huge demand for the 358 bus stop (soon to be RapidRide). This should be added back to the plan.

The plan for a protected bike way all the way from the Fremont Bridge through the heart of Greenwood is awesome. Too bad we did not have those plans in place a few years ago before we did all this recent work to Greenwood Ave.

I still think, as I suggested in my review of the first draft, that a quality bike facility on Holman Rd would be a game-changer in Crown Hill. Bike commute rates drop significantly north of Holman, probably because the street is so awful and dangerous to cross on foot and bike. And because it is a diagonal street, there are no parallel bike route options.

Improving the road into Carkeek Park would be awesome. I love that street, but biking it can be stressful during busy park hours.

This concludes our analysis of the Bike Master Plan Draft 2. Any other thoughts on NW Seattle? Let us know in the comments below. And, of course, take a few minutes to send your thoughts (praise the good as much as you point out the needed changes!) to [email protected].