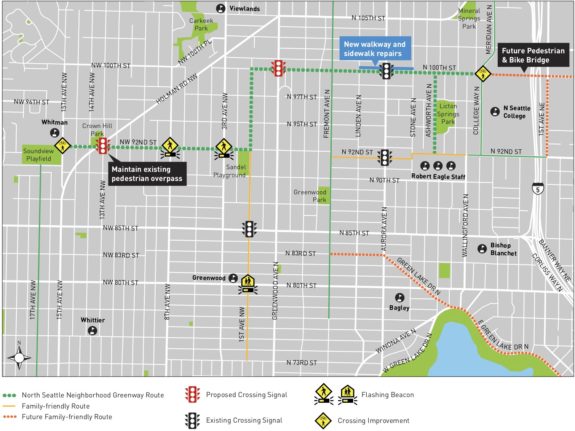 Work on a neighborhood greenway connecting Crown Hill to North Seattle College is underway, according to SDOT.

We’ve hired a contractor to build this greenway and the entire project will take roughly 6 months to complete. Work in front of a specific block or intersection will last for a shorter duration. Construction will begin at Holman/13th and at 92nd/8th as soon as July 23.

Most construction activity will be at intersections where the greenway crosses a busy arterial. We’ll notify neighbors at these intersections separately to give you a heads up about what to expect:

The North Seattle Neighborhood Greenway will span roughly 2 miles, connecting Crown Hill and the Soundview Playfield through Greenwood, Licton Springs, and meeting up with the future Northgate Ped/Bike Bridge, that will add a new walking/biking route over I5 and connect you with the Link light rail station in 2021.

Once complete, the greenway will connect to existing and future family-friendly bike routes in North Seattle. The bike network includes bikeways and Safe Routes to School connections that get you where you want to go, giving you affordable, active transportation options for all ages and abilities. Connections include: