EDITOR’S NOTE: Thanks to Madi Carlson for this post. It comes on the heels of several great posts she’s been writing recently on her blog FamilyRide.us. I especially like her post about family bike camping at Illahee State Park. Forget the station wagon this Memorial Day weekend, family biking adventure is within reach. That’s one reason Seattle is such a special city. Also, did you know she wrote a book? 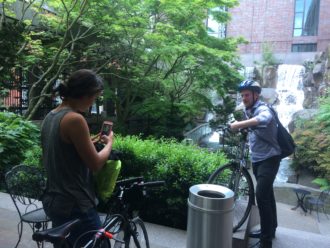 I had the pleasure of biking around Seattle with Elena Studier Tuesday, visiting as part of her Summer by Rail trip.

From the National Association of Railroad Passengers (NARP) press release:

With school and finals behind her, college sophomore Elena Studier this summer is taking her bike on an epic 38-day multi-modal “road trip” across the country by rail, visiting more than 18 cities and 15 states. Studier, 20, spent her school year interning with NARP and sketching out her big adventure. She kicks off her trip in New York City and will make stops in 20 locations—including Glacier National Park in Montana–before concluding more than 10,000 miles later in Washington, D.C. on June 20, 2016.

She’s about a quarter of the way through her trip, having visited six cities over nine days.

I caught up with Elena and Sean Jeans-Gail of NARP shortly after her arrival to the Emerald City, at Zeitgeist Coffee, conveniently close to King Street Station. They were just wrapping up a meeting with representatives from Sound Transit, whose offices are in Union Station, our former train station, located just across the street from King Street Station. The lobby, the Great Hall of Union Station, is open to the public and worth checking out.

I was doubly excited about the opportunity to connect with Elena, having just taken the train with my bike the day before. My trip was a pretty exciting one–something was going wrong with the radiator and just before we made it to Tacoma where they would add more water we stopped to let a train go by in the other direction and couldn’t get started again. A freight engine came 12 miles down from Tacoma to take us the rest of the way to Seattle and we were only an hour and a half late. I add this to a growing list of Amtrak Cascades mishaps with:

When you have little kids who love trains, this kind of stuff is just part of the adventure, though I admit some of my fellow passengers grumbled about the delay.

Elena is also using other forms of public transportation as she travels, to highlight the various modes available. I made use of this yesterday when I dropped my bike off at a bike shop for a tune up and grabbed a bus back home. I took Elena and Sean to said bike shop, Back Alley Bike Repair because due to its proximity to the train, ferries, water taxi, and BoltBus, they see a lot of multi-modal bike travelers. Plus they’re awesome.

There was also a quick stop at Waterfall Garden Park, which has always amused me since it’s quite loud, yet people sit at the tables, trying to chat with friends. But it’s unique and a quick ride or walk from King Street Station.

Next up we met up with “celebrity” traffic engineer, Dongho Chang and Darby Watson from SDOT in Occidental Park just across the street from Back Alley Bike Repair. The park is bustling with food trucks, tons of seating, games (currently a foosball table, and I’ve previously seen ping pong and giant chess), totem poles, and musicians.

Dongho led us on a tour of Seattle’s latest and greatest bike-friendly infrastructure, including the 2nd Avenue protected bike lanes, Bell Street Park, the Mercer and 5th Avenue North bike lanes, and the 7th Avenue protected bike lane (and bicycle leaning rail!). We learned a bit about upcoming improvements–some not announced just yet. Exciting stuff! I pointed out to Elena and Sean that I found it a shame we had to utilize the sidewalk so much for our tour with Dongho, but at the same time, one of the first things I told them about Seattle is that it’s legal to ride on the sidewalk here…although I also pointed out that I find it sad that I consider that such valuable information. But it really is necessary for most people riding bikes in the downtown area. For now, anyway. (more text below the photos) 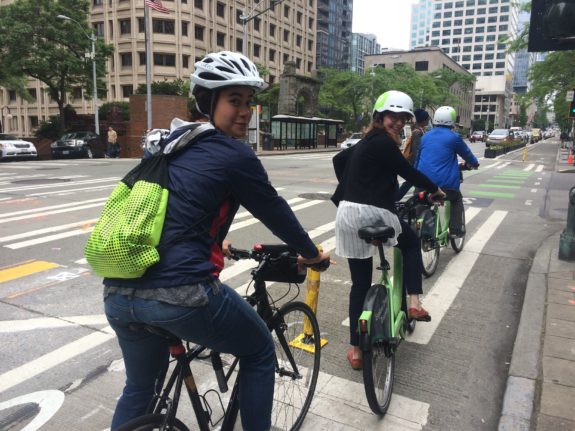 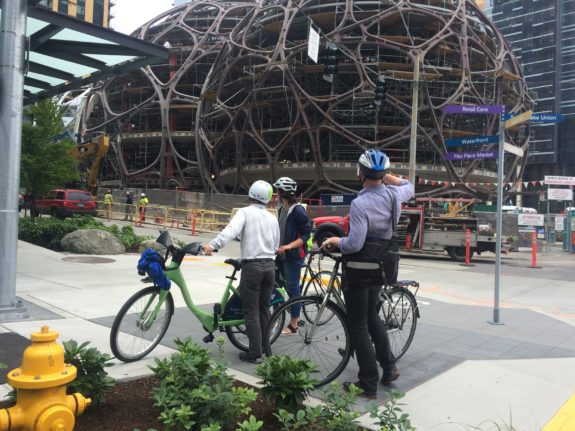 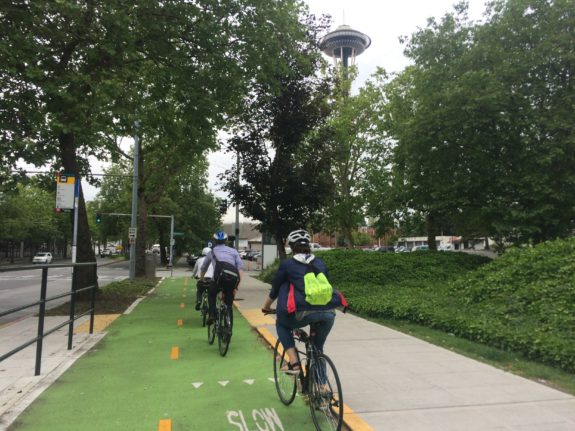 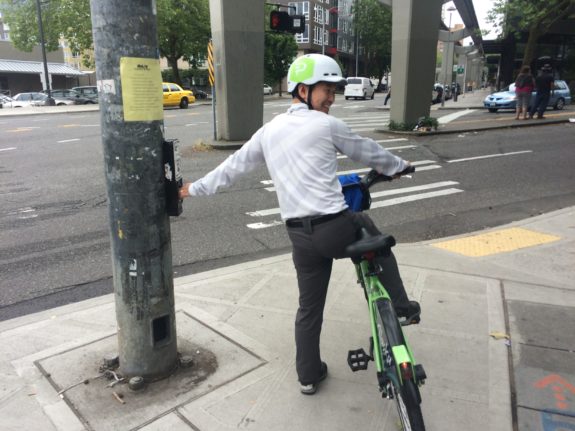 Dongho and Darby headed back to important SDOT stuff and I tagged along as Elena and Sean headed into a meeting with Alta Planning + Design. We talked NACTO, various projects, and secure bike parking at transit stations. They had lots of great questions for Elena so I learned even more about the project. I was particularly interested to hear that rather than push an agenda of her own, Elena hopes to amplify the messages of the people she meets.

Lunch was at Pike Place Market, our bikes locked securely at the bike corral (the one on Pike Place, not the fence on Pike Street by the balloon clown), while we explored on foot. We dined in Victor Steinbrueck Park, watching Washington State Ferries on their ways to Bainbridge Island and Bremerton and the Clipper Ferry on its way to Victoria, BC, Canada, while I shared tales of bike-and-boat trips I had taken. My cargo bike and tandem bike aren’t allowed on buses (other than BoltBus) and trains, but they fit on boats! So the ferries make some wonderful trips possible, like our most recent family bike camping trip at Illahee State Park and Spring Break 2015 on Vancouver Island.

Rather than navigate the Pike Place Market crowds with our bikes to get to the elevator, I led us down Western Avenue. I discovered Western Avenue as a not-too-steep route up from the waterfront by finding a pedicab driver without an e-assist to follow. One of my many route-finding tricks. Elena agreed with me that steep downhills are even worse than steep uphills.

I apologized for the state of our waterfront, but we were soon at the beautiful Elliott Bay Trail and pedaling through the Olympic Sculpture Park and Myrtle Edwards Park. I pointed out the West Thomas Street Overpass, another not-too-steep as well as all-user-friendly route up from the waterfront.

I had to rush home to fetch the kids from school and cut off towards the Ship Canal Trail while Elena and Sean pushed on to the Ballard Locks and beautifully bikey Ballard. I look forward to reading about their experiences there, as well as the Burke-Gilman Trail (and Burke-Gilman Trail Missing Link), Link light rail, and Broadway Cycletrack.

Happy rails to you, Elena!

Madi is Seattle Bike Blog’s Family Cycling Expert. She is the author of Urban Cycling: How to Get to Work, Save Money, and Use Your Bike for City Living. She lives in Wallingford and bikes all over town with her two kids in tow. You can read more of her adventures and thoughts on family life on two wheels at FamilyRide.us.
View all posts by Madi Carlson →
This entry was posted in news and tagged elena studier, familyride, madeleine carlson, national association of railroad passengers, summer by rail. Bookmark the permalink.