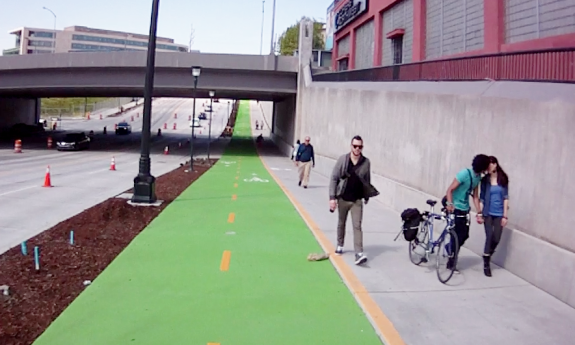 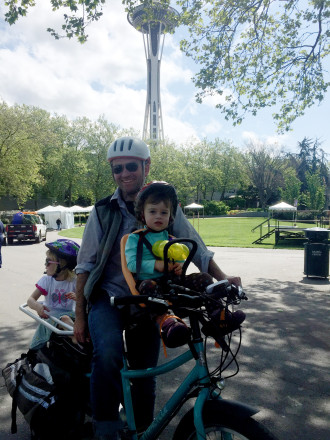 WA Bikes’ Blake Trask biked his kids to Pacific Science Center today, saying he couldn’t have done that without the new lanes on Mercer.

For the first time in a generation or more, the bicycle-repelling wall of dangerous or uncrossable streets surrounding Uptown and Seattle Center has sprung a leak.

The brand new, very green bike lanes on Mercer Street passing under Aurora Ave have finally open, at least for the month of May. This is the first time people on bikes have had a reasonable option for crossing the highway between Dexter and 5th Ave.

If it seems like I’m making a big deal about this, that’s because it is.

Uptown/Lower Queen Anne is a dense neighborhood within easy biking distance of many destinations, jobs and homes. It should be one of the bikiest neighborhoods in the entire city. But ever since Aurora was built into a freeway and Denny Way became the traffic-choked hell-street it is today, there has effectively been no easy or comfortable way to bike to or from the neighborhood.

Here’s what biking from Dexter to Seattle Center is like today:

But don’t get too used to the lanes just yet. The city says they will be open for May, but closed again for a couple weeks in June due to construction work under the bridge.

As major bike routes formed in other neighborhoods and even as nearby Dexter Ave became a bicycle thoroughfare, Uptown has remained severed from these routes. In fact, until work began on the new Mercer underpass, this was the previous option for people biking or walking to Uptown: 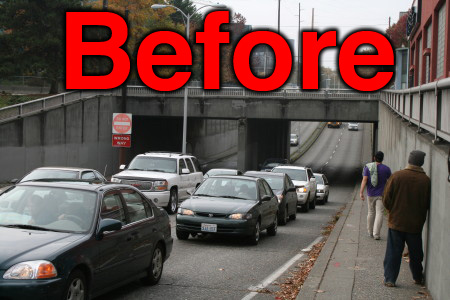 In 1956, leaders thought this atrocity was a good idea, in part to get ready for the never-built (thank god) freeway where Valley St. is today. Photo: Seattle Municipal Archives.

The new bike lane is just one small part of a $237 million car-focused remake of Mercer Street between Elliott Ave and I-5. The project also removed the foolish Broad Street project built in the middle of the 20th Century. Broad was supposed to connect to a never-built elevated freeway on Valley St, which would have walled off the city center from Lake Union.

The Mercer Corridor Project is ongoing, though the finish line is finally in view after half a decade of construction.

If the state ever finishes the SR-99 deep bore tunnel project, the new highway portal design will reconnect John, Thomas and Harrison Streets between Seattle Center and South Lake Union, further reopening the neighborhood to people walking and biking. 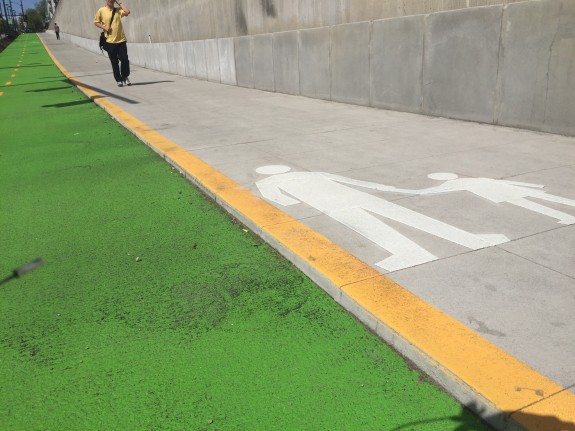 The new bike lanes are short, but it’s a vital connection between Dexter and 5th Ave. The bike lanes are separated from busy car traffic by several feet of planted median and are also at a different elevation than the sidewalk, which will hopefully help keep people from walking in the bike lane and vice versa.

But they are far from perfect. Tune in tomorrow for some thoughts on where this high-budget roads project fails to complete bike route connections, and how it could be better.