If you are among the scores of people who bike to the Bremerton and Bainbridge Ferries or the King County Water Taxis, get ready for more changes to how you get to your boats starting this month. The ongoing seawall project will need to close some space in front of Colman Dock, so detours for just about every user will switch around.

The changes probably affect people driving more than people walking or biking, but folks coming from south of the dock will no longer need to make that strange turn across temporary ferry queue lanes, though folks biking will no longer be able to access that little special cut-through to the bike-only ORCA reader.

For more details, check out the WSDOT website. Here’s a super exciting GIF:

The city’s giant Mercer Project is on schedule to finish on time this fall, the city announced Wednesday. Unfortunately, that means many more months of hairy detours through the construction area. But there is light at the end of the … nevermind, let’s not say that word too close to Hwy 99.

In all seriousness, this project will finally provide a quality biking and walking connection between South Lake Union and lower Queen Anne/Seattle Center. This is a really big deal, and it could even kick off a bike boom in this near-downtown neighborhood that has long been cut off from the rest of the city’s major bike routes. 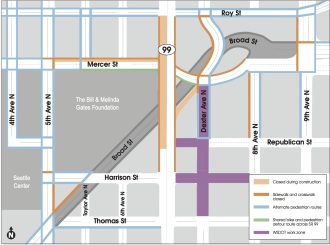 The Seattle Department of Transportation and its contractor have finished much of the construction for the Mercer Corridor Project. Construction is on schedule to continue this year with completion this fall, thanks to diligent, hard-working crews.

The final configuration will feature three lanes on Mercer Street in each direction between Fifth Avenue North and I-5, as well as new left turn lanes at Ninth Avenue North and Dexter Avenue North. The new corridor will also include a bicycle path to help connect South Lake Union and Uptown across SR 99.

Pedestrian changes
·         The west crosswalk on Mercer Street at Ninth Avenue North will re-open later this month after crews complete ADA and sidewalk improvements at the northwest corner of the intersection.

·         In the coming months, pedestrians will be routed to the north sidewalk on Mercer Street and the south sidewalk will be closed for final improvements near Dexter Avenue North. More information will be provided in advance of this change.

·         Crosswalks at the intersection of Fifth Avenue North and Harrison Street are open, although intermittent closures may occur as needed for final improvements.

·         The sidewalk on the east side of Fifth Avenue North will remain closed between Harrison and Thomas streets for the next few weeks as crews lay conduit and form and pour the new sidewalk.

Please obey detour signage to increase the safety of all travelers. Updated pedestrian and bicycle route maps are available on the project website, http://www.seattle.gov/transportation/mercer_schedule.htm

Vehicular changes
·         Full closures of Taylor Avenue North between Roy and Mercer streets will be scheduled during daytime hours as needed to complete electrical work. These are currently scheduled through the week of Jan. 12.

The project team wants to thank everyone for their continued patience throughout construction in 2014. As a reminder, questions and concerns can be sent to [email protected] or our 24-hour construction hotline (206)-419-5818.