Broadway is the new face of complete streets in Seattle (VIDEO) 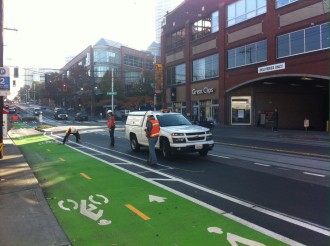 The city of Seattle opened the first section of the Broadway Bikeway this week, showcasing how protected bike lanes can work on even the most active streets in the city.

Broadway connects from Yesler Terrace and First Hill into the heart of Capitol Hill. It runs through some of the densest neighborhoods in the whole city and is lined with vital destinations of all kinds, from small businesses to grocery stores to major medical centers and colleges.

In short, if modern protected bike lanes work on Broadway, they can work anywhere. 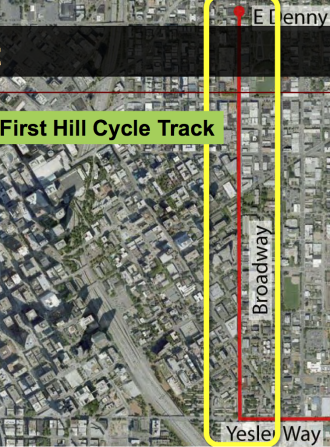 The city officially opened about a short segment of the under-construction bike lanes this week. Stretching about a third of a mile from Denny Way to Union Street, the bike lanes provide a low-stress space for people on bikes and are designed to prevent people from crashing on the new First Hill Streetcar tracks.

Soon, the bikeway will stretch from Denny Way to Yesler Way. Plans are also in the works to extend it at least as far as Roy and potentially even all the way down 10th Ave to Roanoke Park and the future 520 bikeway to the eastside.

With Denny Way closed on the east side of Broadway for light rail station construction, usefulness of the bikeway as a complete bike route is still a bit limited. But that will change in coming years, especially when the light rail station opens in 2016.

There has been some confusion in the first days of operation, with some people confusing parking lanes for turn lanes and others simply parking in the bike lane. However, the city is still finishing work on the project that should make it more clear to everyone how to use the new street. There is always a bit of a learning curve with new street infrastructure, and Broadway is showcasing all kinds of new elements.

Also called a “two-way cycle track,” the Broadway Bikeway includes bike lanes in both directions on the east side of the street. Sometimes a line of parked cars protects people on bikes from moving traffic. In other places, a concrete curb provides a barrier. People biking have their own traffic signals to protect them from turning cars, and green paint is used to remind both people driving and biking to look out for each other.

Transit islands give streetcars and buses a place to pick-up and drop-off passengers without pulling into the bike lanes. They also give people waiting for transit a place to stand that is not in the middle of the sidewalk, freeing up valuable sidewalk space.

Unlike typical bike lanes throughout the city, the Broadway Bikeway makes the safety and comfort of people on bikes a clear priority from beginning to end. No more bike lanes that disappear at major intersections or place people cycling directly in the path of opening car doors.

Protected bike lanes are more inviting to more people, and the city’s Bike Master Plan calls for many miles of similar lanes through downtown and connecting nearly every neighborhood. These bikeways, in conjunction with trails and neighborhood greenways, will form a network of bike routes that people of all ages, abilities and levels of experience will find comfortable and useful.

Broadway is a look at the future of complete streets in Seattle.