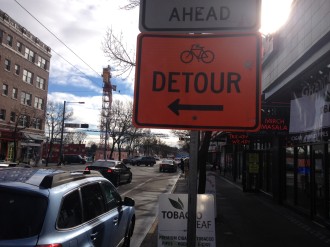 Two weeks ago, people biking southbound on the new Broadway Bikeway were met with a surprise: Oncoming cars.

No, these were not scofflaws behind the wheel, they were following a new detour put in place by Sound Transit as part of the Capitol Hill Station construction. Unfortunately, there was little warning to people on bikes that the northernmost block of the brand new bikeway had been scrubbed out, leading to quite a few people having hair-raising experiences.

After several people took to Twitter to express their concerns, Sound Transit spokesperson Bruce Gray sent me an honest response: “Yes, this part of the project is not off to a great start.” The issues were also well documented by Capitol Hill Seattle.

A few weeks later, Sound Transit has installed signs pointing people on bikes to a detour around Broadway.

The opening of a short section of the Broadway Bikeway has certainly been a learning experience in many ways for the city. Many of the early issues surrounding parking confusion were solved quickly, which is a good sign for future projects.

With construction getting closer to reaching Yesler Way, the southern end of the bikeway is getting tantalizingly close to being finished. But the northern end will be facing construction headaches for most of 2014.

And of course, the Broadway Bikeway won’t truly be finished until the streetcar (and bikeway) extends north to Roy or Volunteer Park.

The Bike Master Plan update, which is still awaiting City Council approval, even suggests extending the bikeway all the way to 520 and Roanoke Park. How amazing would that be?