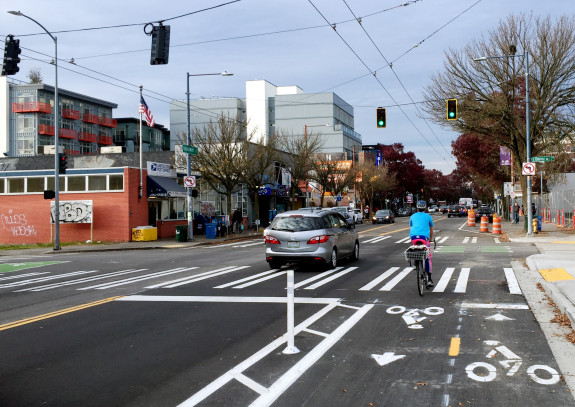 For the first time, the entire length of the Broadway Bikeway’s first phase is now open.

Since it opened officially exactly two years ago, the north end of the project has been a bike route dead end due to construction for Capitol Hill Station at Denny Way. That means one of the city’s most visible and ambitious protected bike lanes has had limited usability, acting essentially as a local-access-only facility.

The reopened section makes it easier to access the businesses and homes on the north end of Broadway, but the transition from protected bike lane to a busy street with only sharrows is still fairly jarring.

There is also a key piece of the design that is still missing: A bikes-only turn lane southbound at Denny to give people an easier way to transition from the shared lane to the bikeway. According to plans, this lane should look like this: 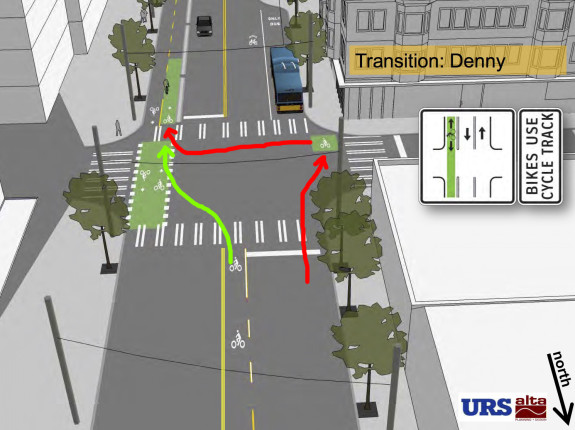 Basically, you should have two options for the transition, which we have drawn on the image above. You can get into the turn lane and wait for a break in traffic to turn into the bikeway, or you can move into the bike turn box on Denny and wait for the signal to change.

I asked SDOT why this bike lane is not currently installed, and it sounds like it was an oversight.

“Thanks for catching this,” wrote Seattle Streetcar Manager Ethan Melone in an email. “I’ve contacted our traffic group to get this added.”

Unfortunately, accessing the north end of the bikeway will still be a bit awkward for the foreseeable future. When Denny Way reopens through the current Capitol Hill Station construction zone, access to neighborhood bike routes east of Broadway will improve a lot, but the problem is not scheduled to be fully solved until the streetcar extension project is complete.

Theoretically, the streetcar extension could be shovel ready next year, as we reported previously. But recent delays in getting the line up and running shrouds the entire streetcar project in doubt.

While it certainly seems silly to stop the streetcar route just before it hits the north Broadway business district, an area packed with destinations and homes, we here at Seattle Bike Blog don’t care all that much about the streetcar. Neither, it seems, do many people at Seattle Transit Blog these days.

But the bikeway is fantastic and worth investing in no matter what happens with the streetcar. The worst thing that could happen is if a streetcar stall takes the needed bikeway extension with it.

By reaching the entire Broadway business district, connecting to Capitol Hill Station, planned quality bike lanes into downtown and the planned 520 Trail to Montlake and the Eastside, Broadway could become a central hub for local and regional cycling routes. This would be great for the businesses in the area and light rail ridership, and it would place a comfortable and connected bike facility in the midst of one of Seattle’s most dense and active commercial areas.

In other words, Broadway should remain at the forefront of people-centered urban design. And a safe bikeway would provide low cost options for getting around the area. After all, the bikeway also comes with some huge walking safety and comfort improvements that north Broadway needs, as we noted previously: 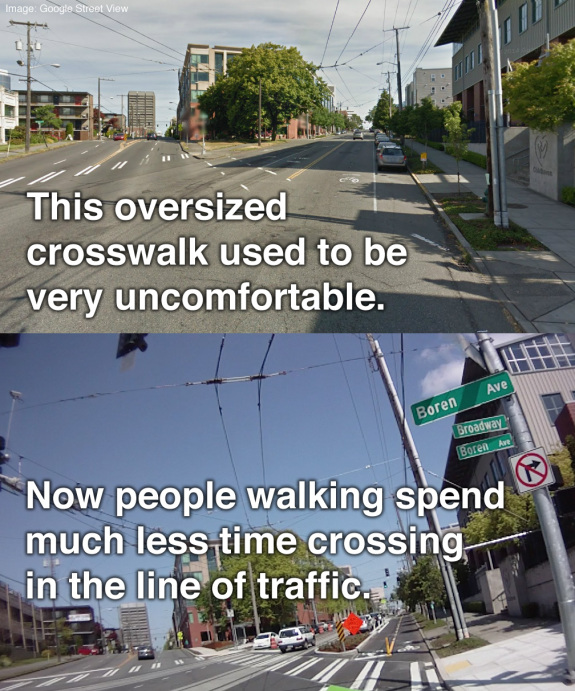