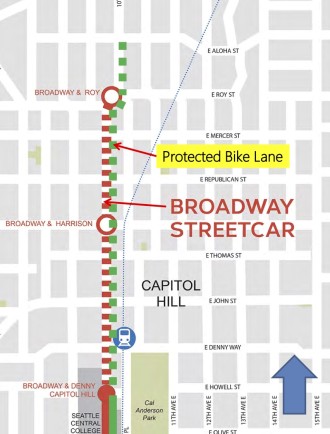 As construction on Capitol Hill Station enters its final phases, the long closure at the north end of the Broadway Bikeway may finally open up in the next month.

But the true glory of the bikeway won’t be realized until it extends through the rest of the Broadway business district at least to E Roy Street. Plans for extending the bikeway are linked to the First Hill Streetcar extension project, which is now in the design phase.

That project construction remains underfunded, but the design for both the streetcar and bikeway will be shovel-ready in 2016. There are talks of filling the funding gap through a Local Improvement District, but that is still very much up in the air. See this Capitol Hill Seattle story for more information.

Art Brochet from SDOT and Steve Durrant of Alta Planning + Design (the firm that also designed the existing First Hill Streetcar project) presented the updated design ideas for the bikeway element of the plan at a recent Seattle Bicycle Advisory Board meeting. Below is a block-by-block look at the plans as they are today, some suggestions for changes and a pitch to have a Roanoke connection ready to meet up with this project’s construction.

There aren’t many huge surprises, since the design is very similar to what already exists on Broadway south of Denny. But there are some subtle differences. For one, intersections will be marked using skipped green paint like the crossbikes on 2nd Ave. This will be inconsistent with other Broadway intersections (which are solid green), but consistent with the way the city plans to mark intersections going forward. 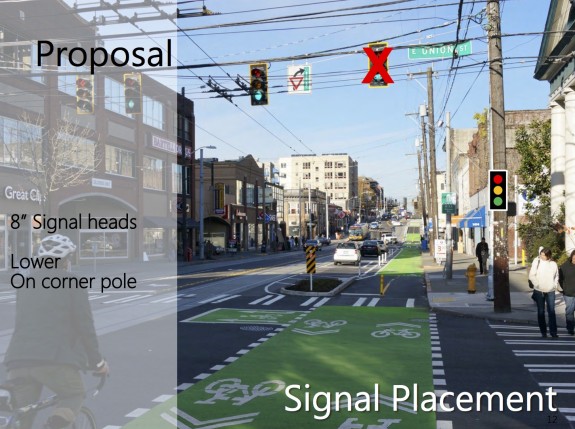 Another subtle-but-important change will be the location of the bike signals. After learning lessons from the existing Broadway Bikeway and 2nd Ave, the new bike traffic signals will be lower on the pole and a different size than the general traffic signals. This should help turning cars more easily decipher the signals and, hopefully, increase compliance with no-turn-on-red restrictions. 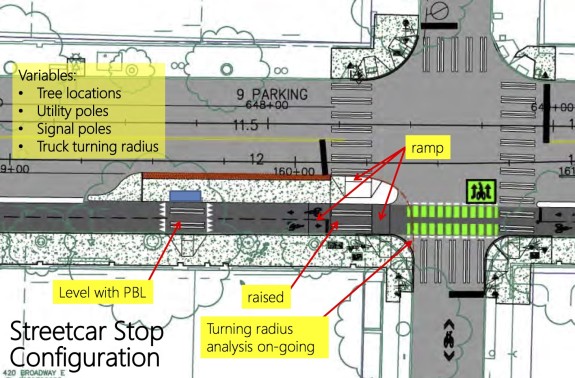 The design of the transit stops will also get a modification: People will be able to access them at-grade from a raised crosswalk. The bikeway will come up to sidewalk level at the crosswalk, encouraging people biking to slow down and giving clear priority to people on foot. This will be especially great for people in wheelchairs or who have other mobility issues.

The extended raised platform should also hopefully slow turning cars and, therefore, decrease the threat to people biking. The city should make these turns as tight as possible, maintain clear sight lines and provide enough space for someone to stop their car mid-turn and wait for people biking.

Turns from the bikeway will still be handled using turn boxes. People with regular-sized bikes seem to navigate these OK, though they can fill up quickly during busy hours. But people with big bikes (like family cargo bikes) sometimes have trouble getting into the boxes, a common complaint I hear about the existing Broadway design.

Bigger boxes would be a good idea, and providing as much protection as possible for people waiting there would also be good. Sometimes, it can feel like you’re sitting in the middle of the road if the box is only paint, which isn’t comfortable.

But the most glaring issue with the turn box plans is that they don’t include boxes at every intersection. The plans resented to SBAB only have a box at Republican, and only because it is noted as a potential neighborhood greenway. This is not a great way to look at bike connection needs on a commercial street like Broadway.

Every intersection is packed with homes and destinations, and the design should assume someone biking will want to turn at every intersection. Harrison, for example, has a major grocery store and a Pronto station. A ton of people are going to want to turn there. Olive Way is busy, but a lot of people are going to turn there anyway, including people starting their trips at Capitol Hill Station.

Here’s a look at the block-by-block plans. At the end, we’ll discuss the transition at Roy/Aloha and beyond: 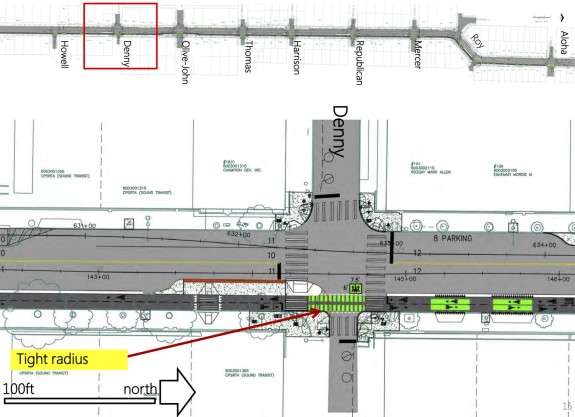 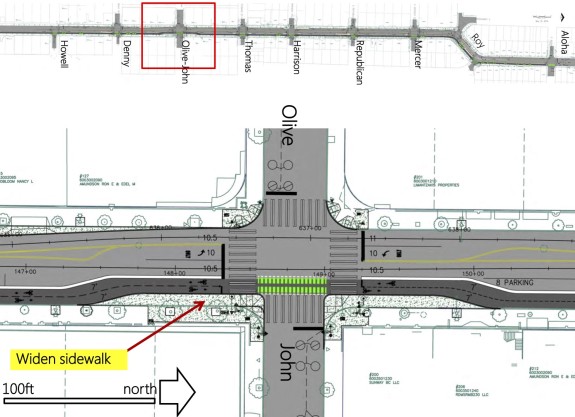 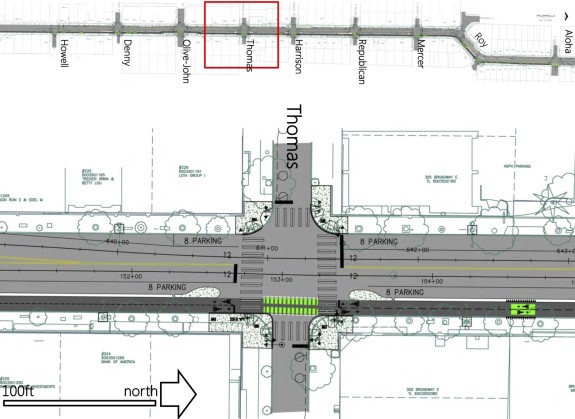 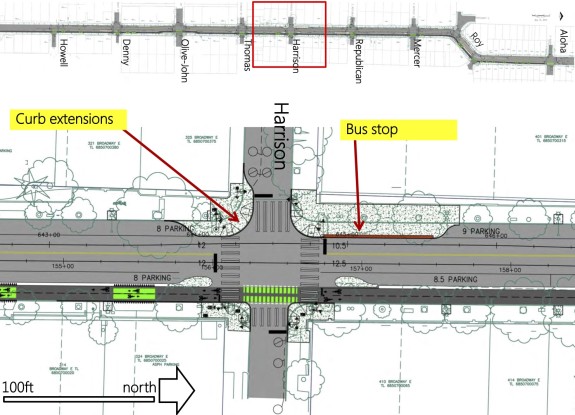 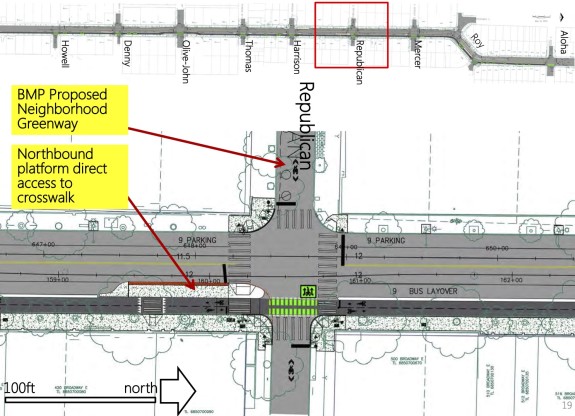 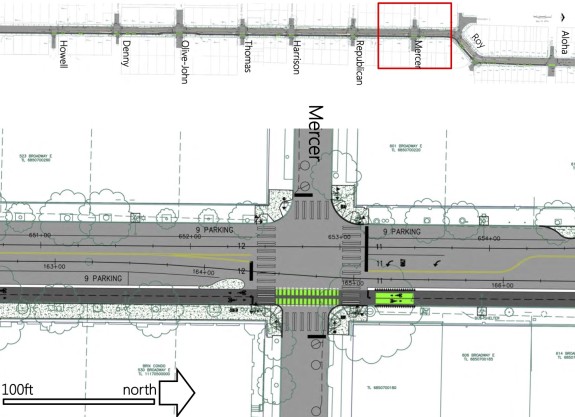 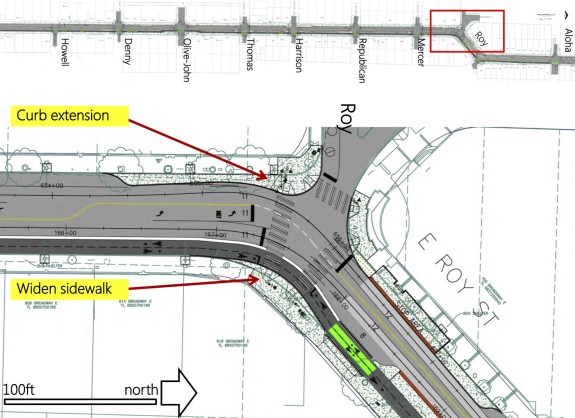 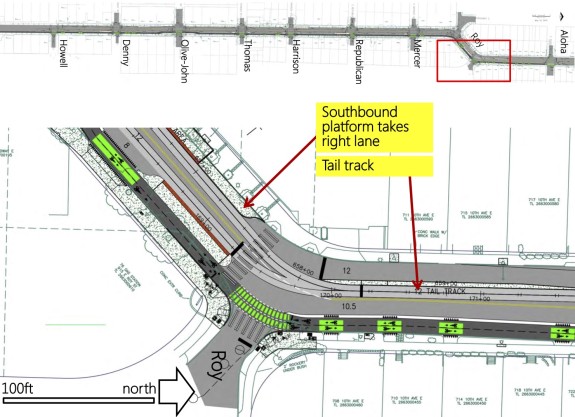 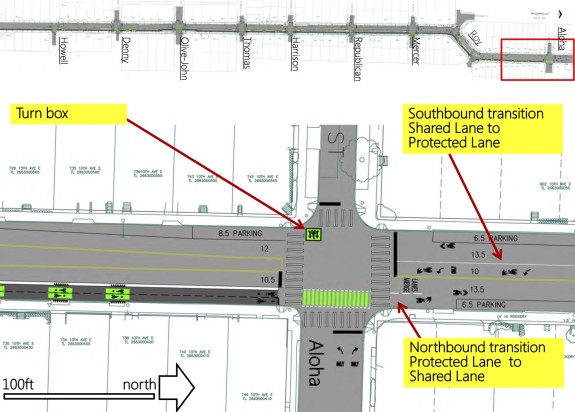 Let’s talk about the north end. First, there needs to be a clear way to turn onto westbound Roy from the bikeway. This area is constrained thanks to the shift in the arterial from 10th to Broadway, so providing turning space is no easy task. But a lot of people will be headed that way, and we don’t want to provide any incentive to bike on the tracks instead of the bikeway. That can be very dangerous, as we’ve learned over and over with our streetcar projects. Imagine, for example, someone biking westbound on Roy from Federal toward the I-5 overpass at Lakeview Blvd (a popular, though rather thrilling, route). How will this design invite them to travel a half block on the bikeway to make that connection?

Connecting to Federal Ave E, the south section of 10th Ave E and the switchback path through Lowell Elementary at Roy should also be considered in the bikeway design. Perhaps this is mostly in the form of signage and improvements to the gas station driveways, but I would love to hear if any readers have ideas. This is a cool little biking and walking route nexus that seems worthy of special treatment. Maybe this is also a great spot for some cool public art?

But the biggest challenge of the whole project is how to deal with the bikeway terminus at E Aloha Street. The current plans are definitely lacking, especially when you consider that it is very important to encourage anyone on a bike to use the bikeway before they get to the streetcar tracks. The gaps in the rails can grab bike tires and seriously injure people. Right now, plans are basically just to paint a turn box at Aloha and pray people use it. That makes me very worried.

Imagine you are biking southbound on 10th mixed with traffic, and you have a green light at Aloha. Do you stop in the green box and wait for the light to change, or do you keep going straight? A whole lot of people will just keep going straight, since that’s simply what you do what you have a green light and you’re biking in traffic. But that puts you on a collision course with the tracks.

From the Bike Master Plan

Now, the project team has made it very clear that their project ends at Aloha, but that just means SDOT should start work on a new 10th Ave E bike lanes project to connect Broadway to the planned 520 Trail connection at Roanoke Park. It’s listed in the Bike Master Plan, but it’s not currently on the city’s five-year implementation plan.

With the 520 Trail connection planned to arrive at Roanoke Park in 2017 (pending funding and if there are no delays, of course) and the Broadway streetcar extension scheduled for completion around the same time (also pending funding), it seems crazy not to connect the two. These are two massive transportation investments separated by only one mile of missing bike lane.

The big question we need to figure out as soon as possible is whether the 10th Ave E bike lanes should be two one-way lanes or one two-way bikeway, since this could affect how the final block of streetcar should be designed. For example, if we are going to transition from one-way to two-way, it might be best if that happens at Roy rather than Aloha. At the very least, the unmovable elements of the project should be designed to accommodate either one-way or two-way bike lanes on 10th.

Here’s a very rough sketch of how a Roy transition could work if one-way bike lanes were built on 10th Ave E: 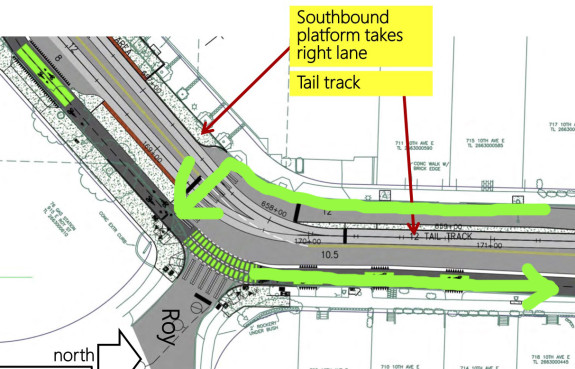 You can send thoughts on the project to SDOT’s Art Brochet at [email protected]. And, of course, let us know in the comments below.