While the usefulness of the Broadway Bikeway is still severely limited due to bike detours at its north end, the 1.1-mile two-way protected bike lane opened Wednesday. Simply put: Broadway is the city’s most ambitious complete street project to date.

The first benefit I want to highlight really has very little to do with bikes at all. A commonly overlooked — but perhaps equally important — benefit of protected bike lanes is the immense safety and comfort increases for people walking. Here’s an example of how the bike lane makes crossing Broadway at Boren much better: 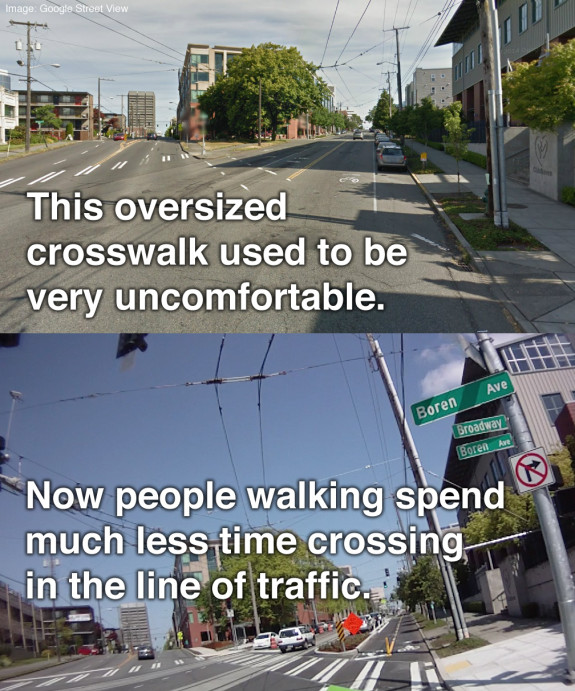 This safety increase is not just wishful thinking. A New York City study of similar protected bike lanes found dramatic increases in safety for all road users. That means fewer people walking, biking and driving are injured and killed while simply getting around town.

But back to bikes. The two-way bikeway on Broadway is, in a lot of ways, a testing ground for the nation. Not only did the city go all-out on the design and construction, but it is also among the first examples of such a lane with significant hills in such a dense urban setting (at least that I’ve been able to find). Hills are a common worry when discussing protected bike lanes, especially two-way lanes. 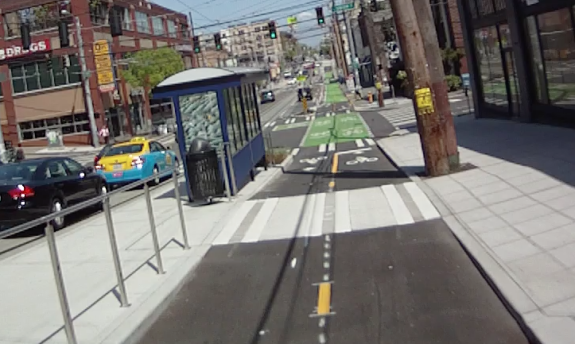 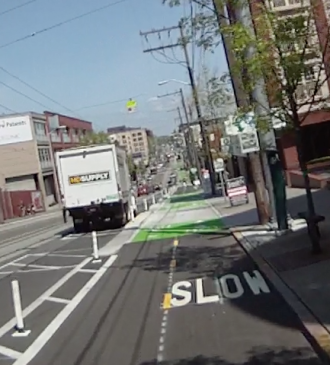 The city has taken measures to slow people on the descents. One simple method is to paint the word “slow” on the pavement. Another method is to change the pavement style from asphalt to concrete and raise the bike lane to sidewalk level. This creates a gentle bike speed hump and a raised crosswalk (good for people with mobility issues who have trouble navigating curbs).

In my experience, the bike lane seems perfectly comfortable to use on the hilly sections. But only time and extensive use will tell whether my sense of safety is confirmed by data.

Driveways remain a serious concern, as people pulling in and out of garages and parking lots need to remember to look both ways before crossing. People biking also need to be aware, as it is a very active area. People tend to walk or stand in the bike lane and you cannot trust people driving to yield before turning into a driveway. Lots of these issues should be eased as more people use the bike lanes and everyone gets more used to it being there. There may also be some design improvements that could help to make the driveways safer, should they prove to be a problem.

You can see some of the major elements of the bikeway in the video we made when the city opened a small section of the project last year (note: The Denny Way connection has since changed). Notice the way the bike signals and the turn signals have separate phases to reduce conflicts. How cool is that? 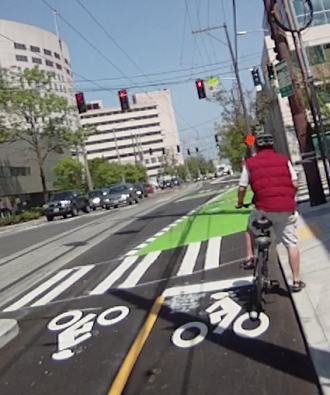 Some of my favorite parts of the bikeway are super simple, tiny features: For example, you now have a comfortable, raised curb to rest your foot at stop lights. And most lights give you a tiny little head start when the light turns green so you can get rolling and well into the intersection before the rest of traffic starts moving. Much of the new space is filled with planters and greenery (especially near Seattle U).

Small details like this make the overall experience more pleasant and comfortable. It’s sort of like how people buying a car often care more about the location of the cup holders than anything else. The small things matter.

Overall use of the bikeway will likely still be diminished this year, since light rail station construction at the north end detours most people to other nearby streets. Yesler Terrace is also a crazy construction zone, and huge numbers of homes are in the process of being demolished. Yesler Terrace was such an active place before construction began, and I hope people displaced can move back into new housing soon. When they do, the bikeway will provide a fantastic connection to the rest of First Hill and Capitol Hill.

Below is an unedited video of one trip along the bikeway just hours after it opened Wednesday. Have you tried it out yet? Let us know your thoughts in the comments.