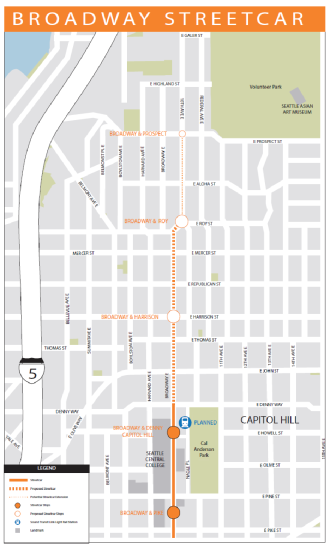 The biggest complaint I hear about the city’s new protected bike lanes on Broadway is the most obvious one: They end abruptly at Denny Way just south of the northern Brodaway commercial area.

Well, the city is still moving forward on plans to extend the bikeway (and the streetcar) at least as far as E Roy Street and perhaps as far at E Prospect Street. You can check out the progress and give your thoughts at an open house Tuesday, 6 – 8 p.m. at Lowell Elementary School.

While a lot of the focus (and price tag) will be on the streetcar portion of the project, we are mostly interested in the bikeway. This is a chance to have protected bike lanes along the entire bustling commercial stretch of Broadway through Capitol Hill, First Hill and Yesler Terrace. This is a big deal, and is definitely the city’s most ambitious complete streets project to-date.

It is also a chance to address the problematic switch-over process at Denny Way that, while currently exacerbated by light rail station construction, will likely be a problem until the bikeway is extended.

As of last year’s technical report on the extension, the plans for the section between Denny and Roy is fairly straight-forward: Extend the current two-way bikeway in a similar fashion to the stretch that already exists. That certainly seems wise and makes sense. It would look something like this: 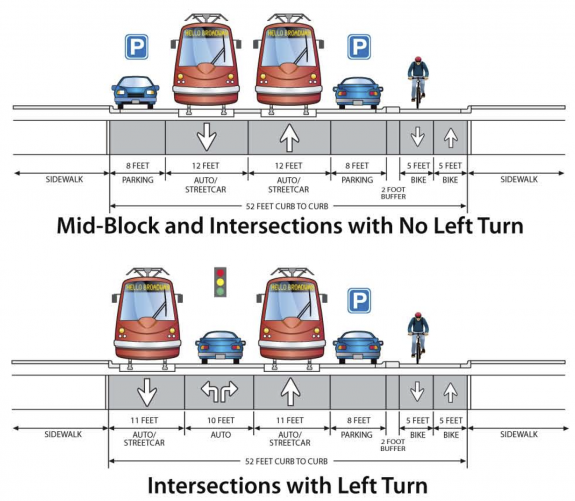 However, things get tricky when transitioning from Broadway to 10th Ave E at Roy. The design and use of 10th Ave is a bit different from Broadway, and the roadway width gets a bit skinnier once you get to Prospect. As of last year, plans were for paint-only bike lanes squeezed between parked cars and the streetcar tracks.

We argued these plans were inadequate and that planners should include protected bike lanes at least as far as the project terminus. Indeed, the Bike Master Plan update approved earlier this year recommends protected bike lanes on the entire stretch of 10th Ave between Roy and Roanoke Park, meeting up with the planned 520 Bridge Trail to the Eastside. Imagine biking from the heart of Capitol Hill all the way to the eastside of Lake Washington using only protected bike facilities. It would be nothing short of a regional mobility game-changer.

Switching from the two-way bikeway to two one-way bike lanes at 10th and Roy probably does make sense, especially since the long downhill on 10th Ave would likely be more comfortable without counter-flow bike traffic heading up the hill. But paint-only bike lanes squeezed between the parked car door zone and wheel-grabbing streetcar tracks are not good enough.

I can’t say for sure exactly what the best solution is, but here are some sketches we threw together using Streetmix to show what 10th Ave could look like and get those creative juices flowing (the car lanes with hash marks are for parking):

For more on the $25 million project, see coverage at Capitol Hill Seattle.