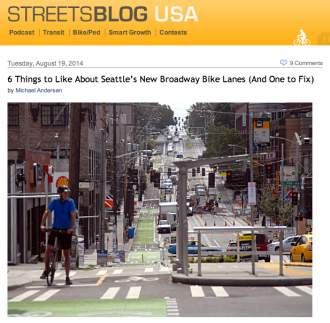 You’ve already seen our thoughts on the Broadway Bikeway, but the lanes caught the eye of Michael Andersen at the national Green Lane Project due to the lengths the city went to work around the street’s many turning conflicts. His observations were posted at StreetsBlog USA.

The Broadway Bikeway is a two-way bike lane included as part of the First Hill Streetcar project as a way to maintain bike access and improve the safety of people on foot on this key commercial street. But it’s the way the city deals with driveways that piqued Andersen’s interest:

The resulting lanes are rare in one important way: they create a two-directional protected lane on one side of a two-way street. That’s a little-used design due to the large number of possible turning conflicts. But Seattle is showing that with enough money and care, it can be done.

Andersen also praises the way bikes are not only routed behind transit stops, but that the bike lanes rise to sidewalk level to make it clear people walking have priority:

Broadway’s bike lanes actually cut the cost of the associated streetcar project significantly, because they run on top of a water line that would have had to be displaced if the streetcar had hugged Broadway’s east curb. This put the bike lanes between the transit stop and the sidewalk, a setup that’s common in Europe, and works just fine in the United States, but requires some nuance.

Here, designers raised the bike lane to sidewalk level for cyclists as they approach the transit stop, communicating to people pedaling that (like a car on a raised crosswalk) they’re no longer in their own space and should yield to pedestrians.

But there is one big problem, and regular users of the bikeway are probably familiar with it (no, I’m actually not talking about people parking in the bikeway). People constantly miss or ignore the restriction against right turns when they have a red arrow. There may be ways to adjust the design of the signals and signage to help address the problem, like lowering the bike signal to be on a different level than the standard traffic lights. Or maybe some enforcement is needed (though if so many people are disobeying it, that could point to a design problem).

But speaking of people parking in the bikeway, Capitol Hill Seattle reports on what you should do if you see it:

Photos of cars and delivery trucks blocking the Broadway bikeway continue to be readily available on Twitter. According to SDOT, no vehicle is allowed to park in the bike lane, including delivery trucks. If you see a vehicle parked in the bikeway you can report it through the city’s Find-It-Fix-It or SPD’s non-emergency line at (206) 625-5011. An SPD spokesperson said people can always call 911 if they deem the situation to be an “in-progress hazard.”