Move Seattle: One plan to rule them all 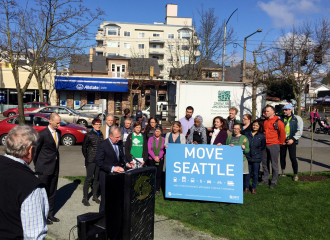 If you were engaged in shaping the recent update to the Bicycle Master Plan — which took two years and included lots of multimodal analysis — I know what you’re thinking: Another transportation plan in Seattle? How many of these do we need?

“This is a plan about how we integrate all those plans into a single plan,” said Mayor Ed Murray during a press conference Monday. In other works, Move Seattle doesn’t trash or replace the Bike Master Plan (whew).

Rather, it’s more like a list based on the city’s modal plans (walking, transit, bike and — soon — freight) that represent the mayor’s priorities and set the stage for the city’s next transportation ballot measure to replace the expiring Bridging the Gap levy. Details about the new measure will be released in the next week or so, and voters will take it up in November.

But not all “complete streets” projects will include bike facilities. In fact, Mayor Murray made a point during the press conference that sometimes freight, transit and cars may be on one street while “perhaps people and bicycles are on another route,” such as a neighborhood greenway. The document expands on this idea:

For example, while Dexter Avenue’s design solution with buffered bicycle lanes behind transit stops was right for this location, it’s not a perfect fit for every street. Streets like East Marginal Way or 23rd Avenue are also important multimodal corridors and will have their own unique designs.

We have been critical of this concept that neighborhood greenways can be considered “alternatives” to proper bike facilities, especially on commercial streets packed with destinations. In Seattle, geographic challenges also make it hard in many cases to provide a consistent and usable parallel route, as we have seen in the hopeless search for a so-called parallel greenway to 24th Ave E (speaking of 24th, a road diet there is included in Move Seattle. See below).

But despite that quibble, there’s a lot to like in this plan. While Vision Zero sets a goal of zero traffic deaths or serious injuries by 2030, the Move Seattle sets its sight on zero deaths by 2025. With current rates of decline, I wonder if we can’t get there sooner. Especially if voters pass a new transportation measure with bold new funding for safety projects.

In the next three years, Seattle will build 50 miles of protected bike lanes and neighborhood greenways. This is on top of the speed limit reductions and speed zone projects outlined in the Vision Zero plan released recently. The city will also install 1,500 more bike parking spaces in the next three years, complete Safe Routes to School projects at 12 schools, build 30 miles of new sidewalks in areas without them, repair 25 blocks of sidewalk per year and rehab five stairways per year.

In addition to transportation routing, the plan also lays out plans for activating public spaces and imagining streets as places. For example, here’s a pretty cool graphic showing the potential to expand public, park-like space in the city’s right of way: 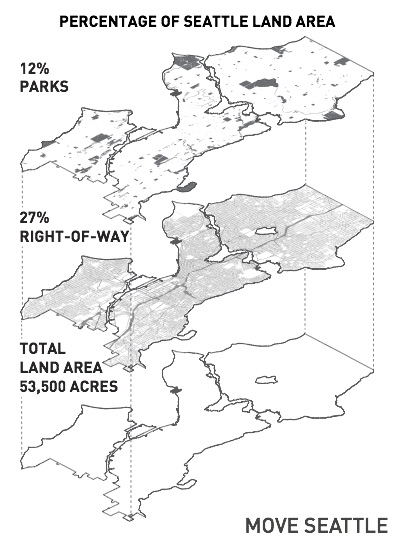 We all know that cars are expensive. The average household spends 17 percent of its monthly income on transportation. Most of that is for car costs. Here’s a graph showing how the average Seattleite who still owns a car can save a ton of cash by ditching their wheels: 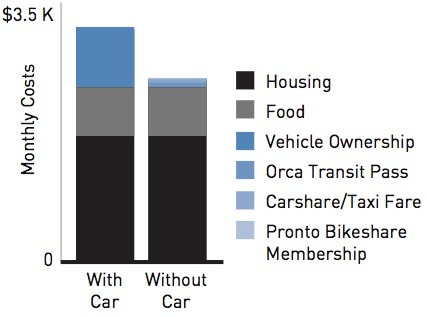 Prioritized projects in next ten years 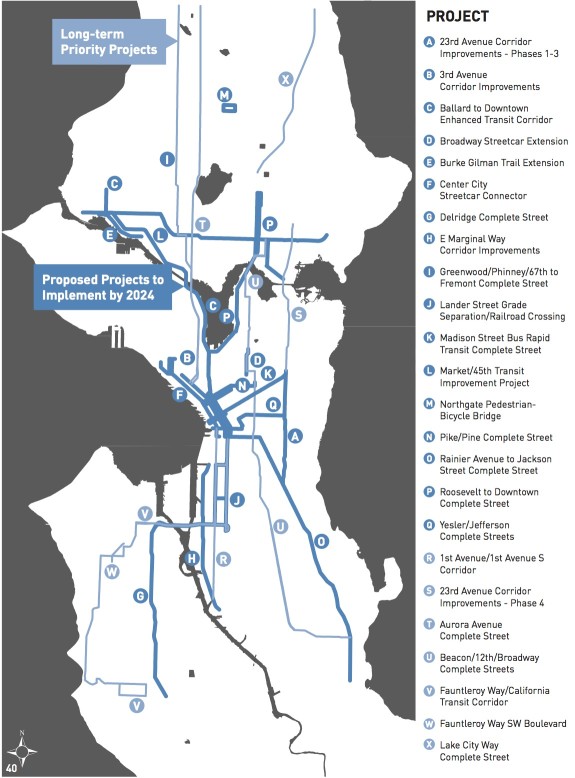 Below is a selection of the projects listed in the Move Seattle plan. We are only highlighting some (but not all) that specifically mention bicycling, though others may have chances to improve bike safety and mobility as well. If you want to learn more about how the priority scoring was calculated or see the full list of projects, start on page 36 in the Move Seattle document (27 MB PDF). 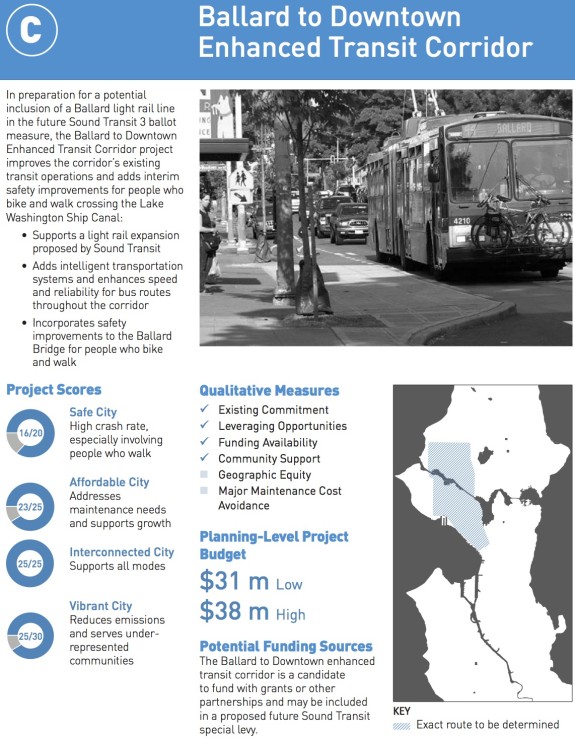 Burke-Gilman Missing Link in Ballard included, though the document notes that the “exact route is yet to be determined.” A slow-moving Environmental Impact Statement is in the works to help determine the route. 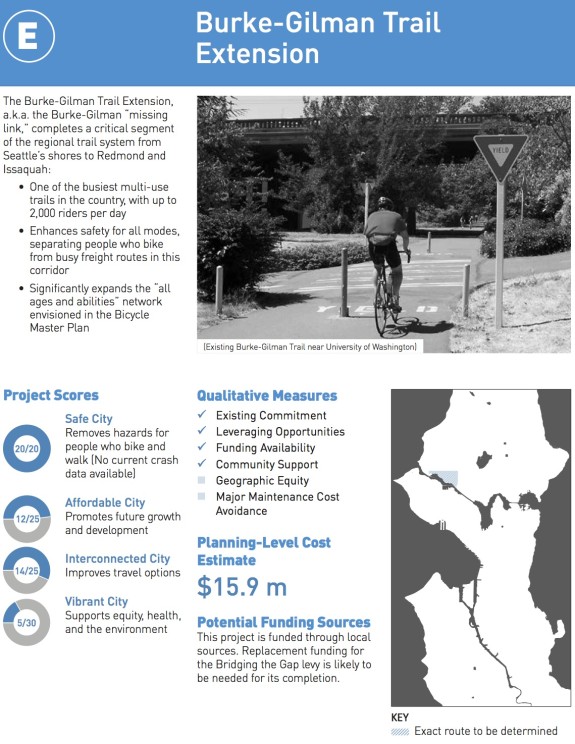 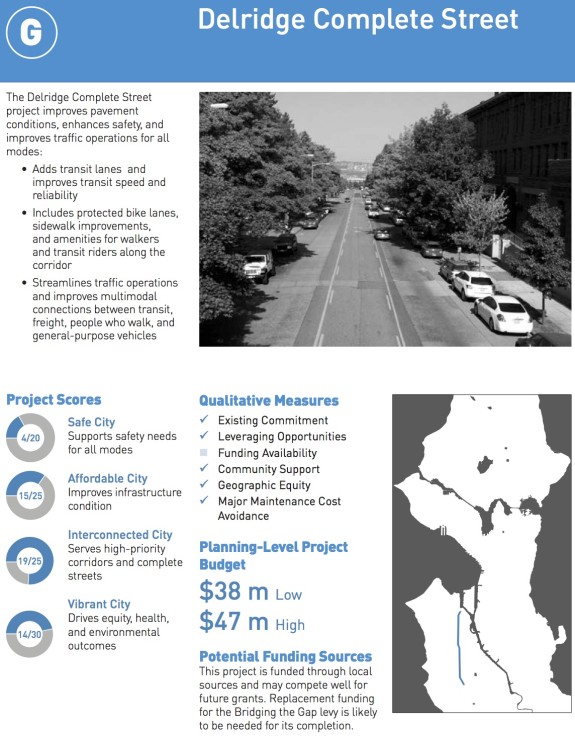 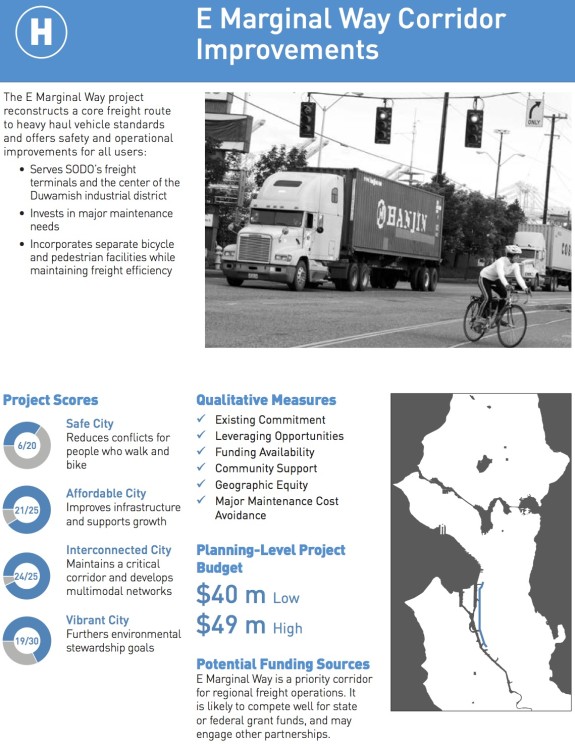 Interurban North bike route users (you may use this route without knowing it has a name), the city is going to fix the inadequate Fremont Ave/Phinney bike lanes. 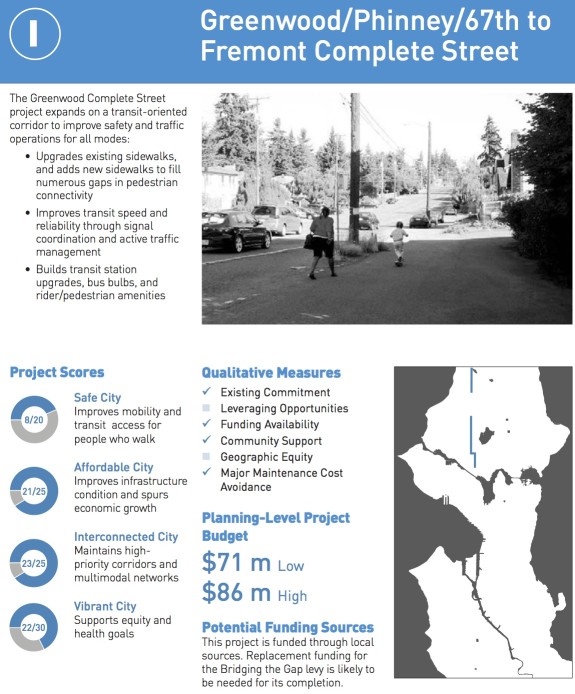 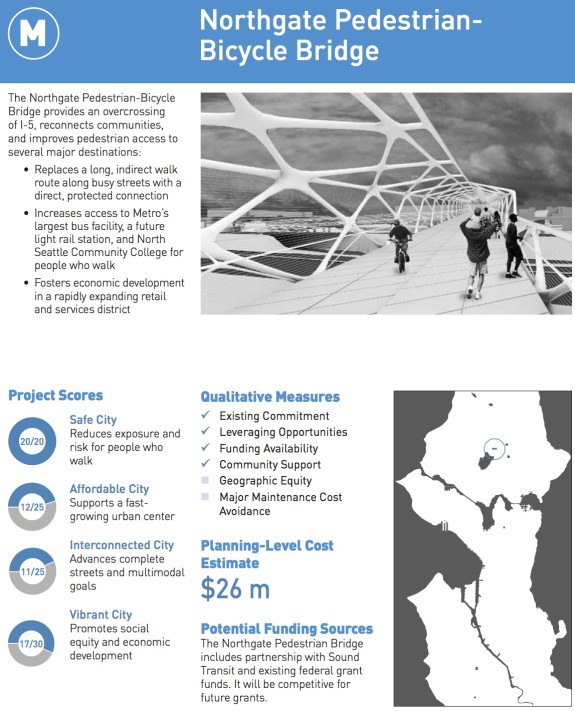 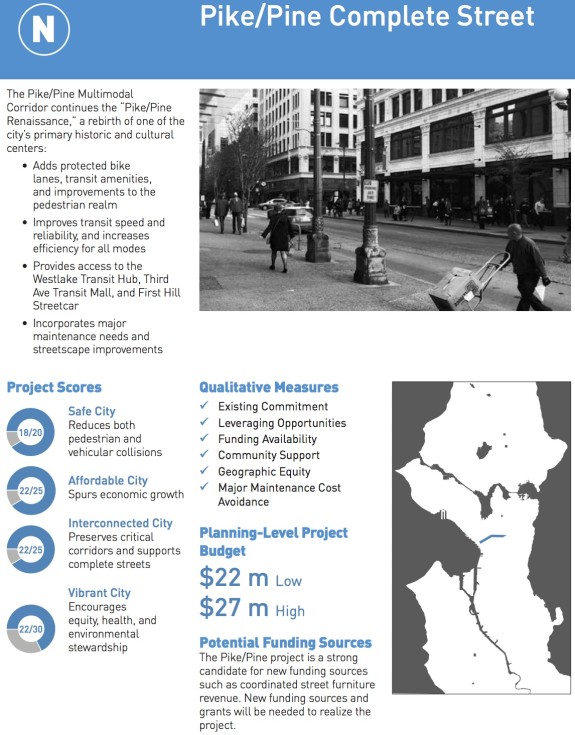 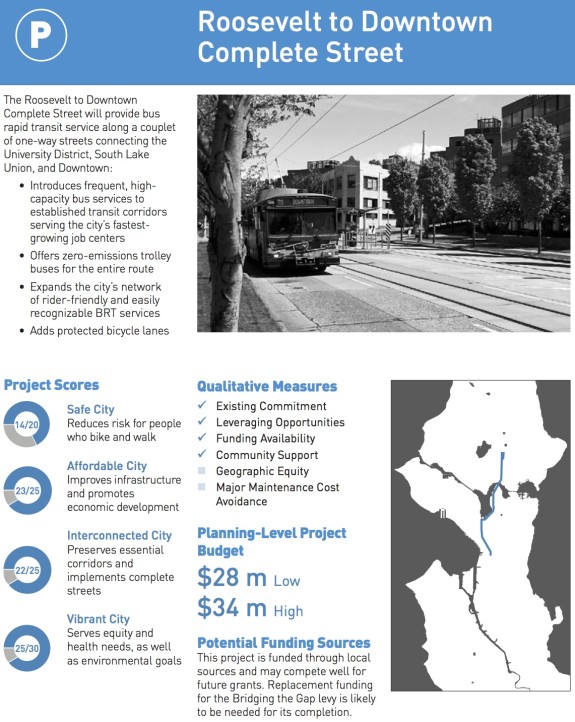 People at the Rainier Ave meeting just last week were asking why the city wasn’t making the street safer all the way downtown. Well, they plan to. 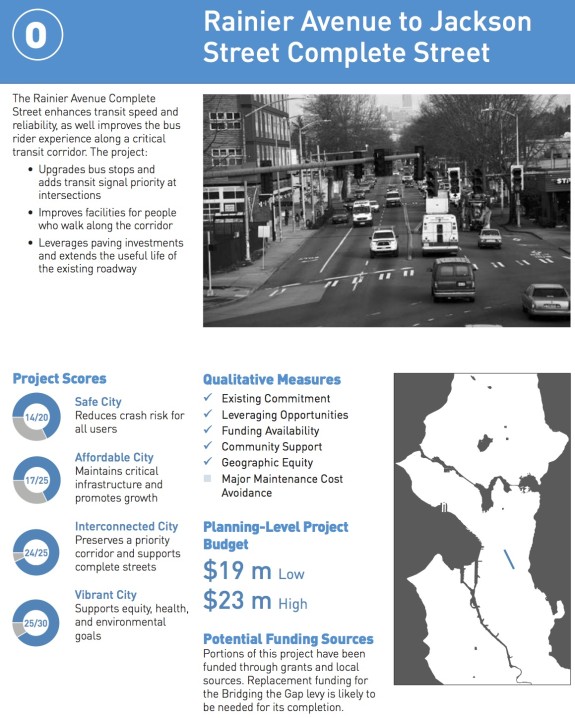 No word yet if the Yesler bike lanes will come with a bike escalator. 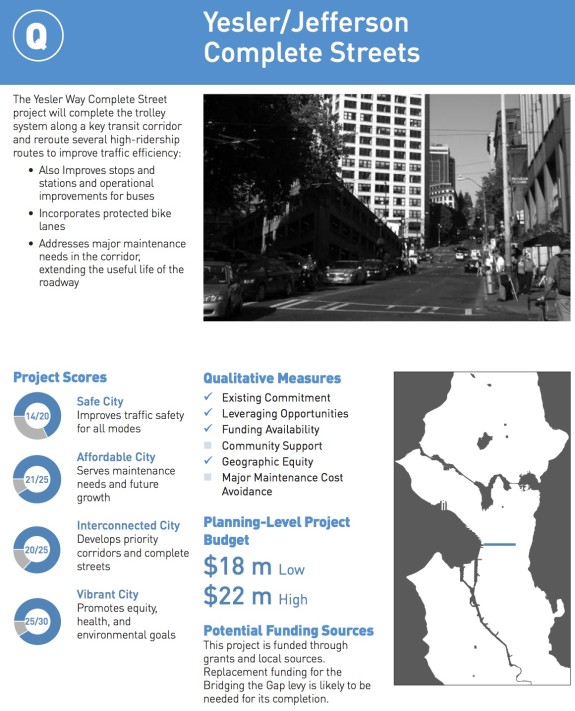 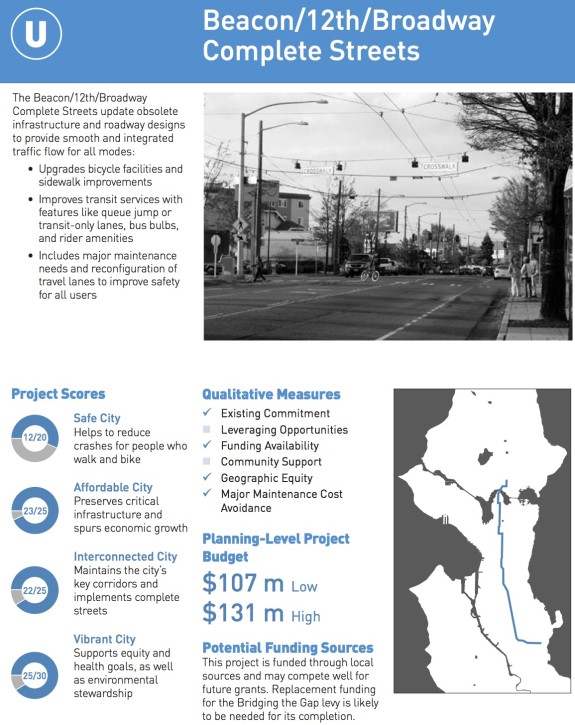 A few other projects — like 24th Ave E from the CD to Montlake and 1st Ave S — don’t specifically mention bike lanes, but should.

Notice anything in the plan that I missed? Let us know in the comments below.

25 Responses to Move Seattle: One plan to rule them all