Rainier is the city’s most dangerous neighborhood street. But it could be the best.

People are getting killed and seriously injured along the entire length of Rainier Ave. Image from the SDOT presentation. Data for past ten years.

Rainier Avenue will be safer by the end of the year.

Every option the city presented (PDF) at a public meeting Thursday evening in Columbia City included a significant redesign of the notoriously dangerous street. And the city is not going to wait long to take action.

Some signals and signage changes will roll out this spring, followed by some more significant safety upgrades starting in the summer and going into 2016.

Before we get into the solutions, let’s follow the city’s lead and outline the problem.

Jim Curtin and Dongho Chang of SDOT did a very good job explaining, step by step, why the street is so dangerous and how — though genuine community input and thoughtful design changes — the city will move quickly to dramatically increase safety on the busy commercial and neighborhood street.

The big crowd at the meeting seemed very receptive to the ideas the city presented and strongly in favor of safety changes. Cheers rang out when Curtin announced plans to lower the speed limit to 25 mph through the Columbia City and Hillman City business districts. People also cheered when Curtin said they will lengthen the crosswalk signal times. As we reported previously, a study found that traffic signals in Rainier Valley give people less time to cross the street than Ballard.

When Curtin showed the slide below, the crowd gasped. Rainier is way more dangerous than it should be, and it has been this way for a long time. 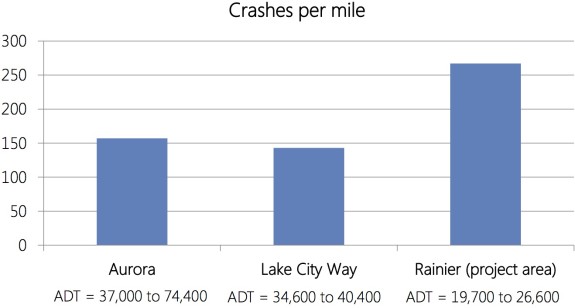 So how are these collisions happening? Traffic studies found that half or more of the collisions happen like this: Person trying to make a left turn cannot see around oncoming left-turning cars and make the turn in front of a car continuing straight. 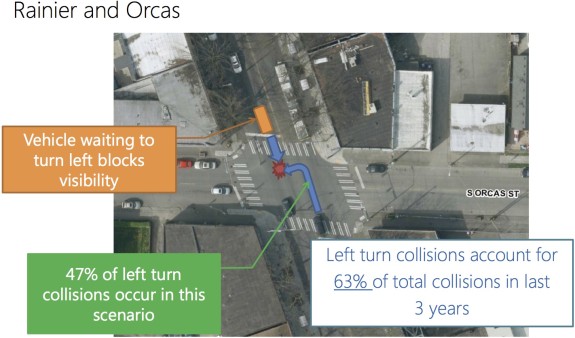 A huge number of the incidents where someone driving hits someone walking happens at driveways and parking lot entrances. Often, these are people quickly making stressful turns across the two oncoming lanes.

And Rainier collisions have an outsized injury and death rate in large part due to the rampant speeding on the street. The odds and severity of injury increase dramatically with every extra mile per hour.

All these collisions and the problem of speeding can be significantly reduced by adding a center turn lane and reducing the number of general travel lanes people need to cross. And that’s exactly what the city plans to do. 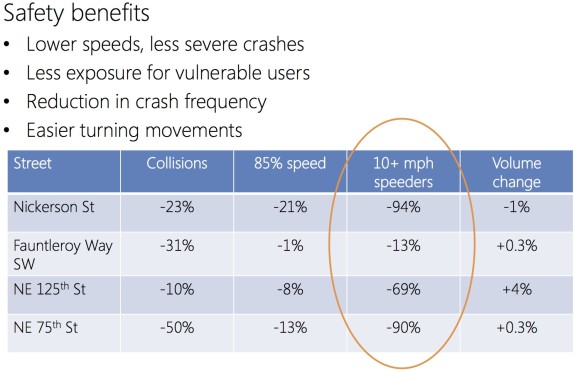 The city’s history with redesigns like the one proposed on Rainier is overwhelmingly positive. The most recent and most comparable example — on NE 75th Street — reduced collisions by 50 percent and reduced high-end speeding (at least 10 mph over the limit) by an astounding 90 percent. NE 75th Street is also a good example because it carries an almost identical number of vehicles per day as Rainier (about 20,000).

And though people might worry that reducing the number of through-lanes could push people driving to side streets, these redesigns consistently show that car traffic levels remain essentially the same (and if bike lanes are included, bike volumes go way up).

So redesigning Rainier to have one lane in each direction and adding a new center turn lane is the plan for sure. Now the city is trying to figure out the details.

Option 1b would include bike lanes for the green segment

First off, this project only bites off the four-mile section of Rainier between Charlestown/Letitia and Henderson. Of that four miles, the city’s initial concepts do not include a full redesign of the northern section from S Charlestown Street to S Alaska Street. This section — which sees higher traffic levels than the section south of Alaska — would get some changes to help prevent dangerous turns into driveways, but would remain four or five lanes wide.

The redesign would begin at S Alaska and head south all the way to S Henderson. One option (1b) would include protected bike lanes through Columbia City and Hillman City. Of course this prompted people at the meeting to ask the obvious question: Why not include bike lanes for the entire street?

Another option (2) would not include bike lanes, but would add some bus lanes in key locations to help keep Metro’s Route 7 moving. The 7 is one of the busiest bus routes in the city, carrying 11,000 people every day. It needs to run quickly and efficiently since ridership will only grow as more people move to the neighborhood.

The proposed changes will effectively not impact travel times. Initial models suggest an increase of two minutes during peak hours only, but this includes slowdowns due to the lower speed limits. When a member of the crowd asked attendees for a show of hands about support for lowering the speed limit, nearly everyone raised their hands.

First off, this project is a huge deal. I have not been able to stop smiling since the meeting last night. There were so many great suggestions from community members, and the conversation was one of the most fruitful neighborhood safe streets discussions I have ever been part of. It is clear that the Rainier Valley community wants to make this street work better for everyone, even if that means a significant street redesign. This Rainier Ave meeting was refreshing, engaging and filled with hope.

Getting the exact details of the redesign is going to take work, and it’s going to require trade-offs. Bus reliability is vital. Further improving crosswalks is vital. And providing a safe space for people on bikes is vital.

Rainier Ave is one of those streets that cuts its own path through the street grid. It also follows the least-hilly route through a neighborhood with some significant geographic challenges. And, finally, it connects tons of community centers, schools, parks and businesses in a way that no other street in Rainier Valley does. A lot of people already bike on Rainier for all these reasons. Whether you’re commuting to downtown, transit routes on I-90 or just trying to get from Bike Works to Rainier Valley Food Bank, Rainier Ave is the only street that really makes sense.

How exactly does this all work out on Rainier? I don’t have all the design details, and neither do the planners at this time. Thursday’s meeting and the meeting Tuesday 6 to 8p.m. at the Ethiopian Community Center are about presenting the basic concept for a redesign and gathering community feedback.

The city will then go back and further develop and analyze the options, bringing the results back in the spring:

The city should include an ambitious redesign that includes the safer three lane design for the entire project length from Charlestown to Henderson. They should also look into a design that includes both bike lanes for the entire project length and bus efficiency improvements to keep the 7 running on schedule. This could mean increasing that two-minute drive-time delay a little (and increasing the budget), but the benefits of a truly complete Rainier Ave would be immense.

Today, Rainier Ave is the city’s worst neighborhood street. But it could be the best.

25 Responses to Rainier is the city’s most dangerous neighborhood street. But it could be the best.