Rainier Ave is the only flat and direct street between Mount Baker and the International District/downtown. If southeast Seattle is ever going to have good bike access to the jobs and other major destinations downtown, Rainier Ave will need bike lanes. It is a diagonal street through the low point in a valley. There are no other options for a direct and flat bike route.

At the same time, Rainier is so wide and dangerous that it sees far more traffic collisions than north end streets with double its daily traffic volumes: 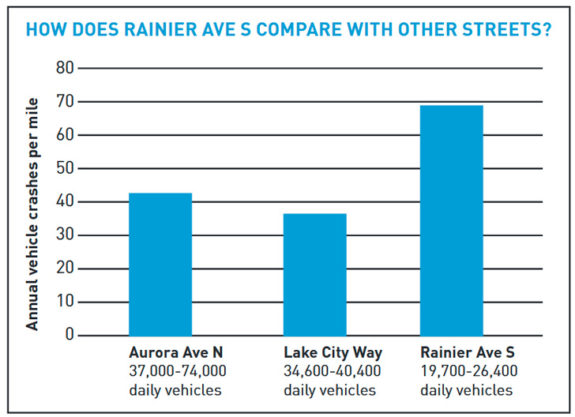 The street connects downtown to neighborhoods with low rates of car ownership that have been shamefully underserved ever since Seattle started building bike lanes: 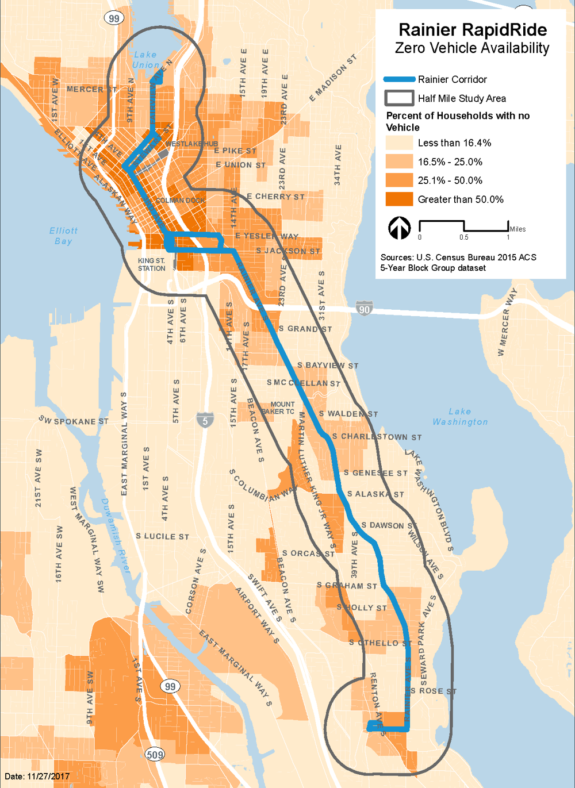 With protected bike lanes on Rainier Ave, it could be as easy and comfortable to bike to the south end as it is to bike to Fremont. There is no other bike investment outside downtown that would have as big an impact as Rainier Ave bike lanes, especially the north section between Mount Baker and the International District.

This is the perfect time to make bold changes to this stretch of Rainier Ave because Sound Transit is currently building a light rail station where the road crosses I-90. That station will have no car parking and will head directly to job centers on the Eastside, so being able to access this station by walking, biking and transit is vital. And Rainier Ave is the only direct and flat option for making that connection.

But an SDOT RapidRide project that is planning to redesign this stretch of the street appears on the verge of blowing this opportunity. Project planners presented three options for the street recently, none of which feature quality bike lanes. This is simply not acceptable.

You can tell the project team through their online open house that you want them to go back to the drawing board and find a solution for Rainier Ave that includes safety and mobility for people biking and keeps buses running reliably. The open house ends Saturday, so don’t wait to fill it out.

There are so many examples of streets around the world that move transit efficiently, carry plenty of cars and include safe bike lanes. Rainier Ave is a very wide street. I do not accept the excuse that planners cannot find a way to fit bike lanes on it: 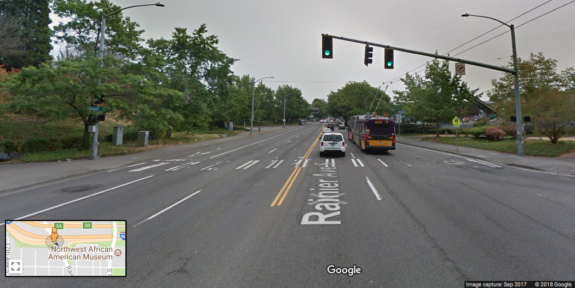 There is plenty of space for protected bike lanes here.

This is a good opportunity for Mayor Jenny Durkan to assert herself as a transportation leader. The mayor should direct SDOT to prioritize walking, biking and transit on Rainier Ave and to get her a design that would help the city meet its biking, traffic safety, equity and climate change goals. The current options all fail by these measures.

Some red and green paint, some flowers and planters and you’ve got pilot bike and bus lanes on Rainier Ave. Concept image made via Streetmix.

Even better, Mayor Durkan could challenge SDOT to come up with a pilot project on Rainier Ave to try out protected bike lanes and bus improvements using paint and other low-cost materials. That way people can see how it would work for themselves and project planners could observe and make improvements as needed.

Mayor Durkan has already proposed connecting downtown’s 2nd Ave bike lane to the Dearborn bike lanes in 2019. If she directed SDOT to also accelerate that plan, people would be able to bike from the Space Needle to Franklin High School entirely on a relatively flat and traffic-separated bike route by the end of this year.

Founder and Editor of Seattle Bike Blog.
View all posts by Tom Fucoloro →
This entry was posted in news and tagged jenny durkan, rainier ave, rainier rapidride. Bookmark the permalink.