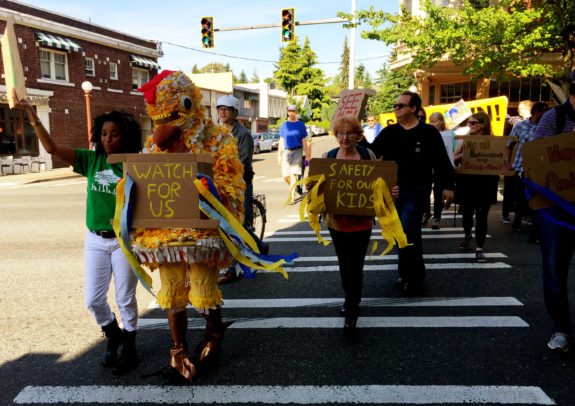 Phyllis Porter of Rainier Valley Greenways (left) leads community members in a march across the crosswalks holding signs calling for a safer Rainier.

Map of collisions along the study area for Phase II of the Rainier Ave Road Safety Corridor Project.

Rainier Ave needs bike lanes. There’s just no way around it. It’s the flattest and most direct way between Rainier Valley’s biggest business districts and downtown. The neighborhood cannot be truly accessible by bike without Rainier Ave bike lanes.

Today (Thursday) is the final day to complete SDOT’s online open house and survey about plans for the next segment of the Rainier Ave Road Safety Corridor project. If you don’t have time to complete the open house, Cascade Bicycle Club has also created a quick and easy way to email your support.

Unfortunately, as Martin Duke at Seattle Transit Blog points out, the city seems to be pitting transit against bikes with their two options. This is a false dichotomy. We need to prioritize both. It something is going to give, it can’t be bus ridership or street safety. I’m looking at you, on-street car parking.

Both options include on-street parking, and the bike lane option (Alternative 2) actually includes more parking than the bus lane option without bike lanes. Why is car parking mandatory in the city’s plans, but bus and bike lanes are optional? That’s completely backwards. Why not use some of the space for parking in Alternative 2 to instead help speed up buses? 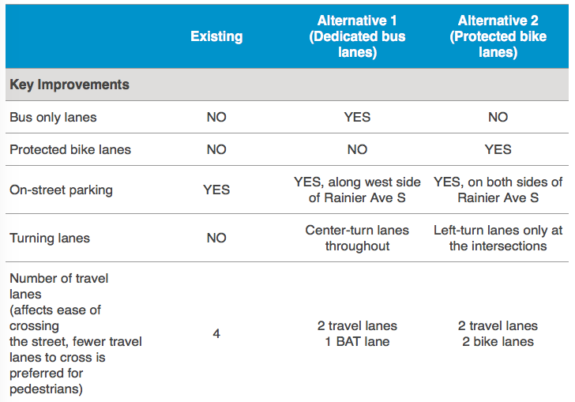 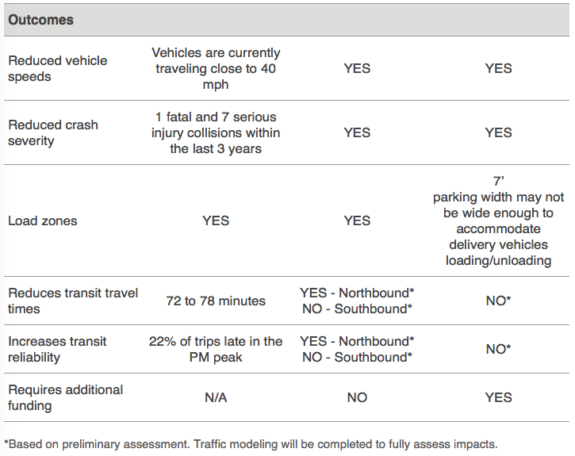 As Andrew Kidde at the South Seattle Emerald notes, the benefits of Rainier Ave bike lanes on the new section could easily extend into at least part of the stretch north of the study area where the city conducted a safety project two years ago:

And the implications are even bigger — bike lanes could be extended up into the Phase 1 area with minimal effort. When SDOT repainted the lines for the Phase 1 road diet, they provided three 12 foot wide lanes. A car is 6 feet wide, and a 12 foot lane is the most generous size, typical for highways with 60 mph traveling speeds. Twelve foot lanes invite speeding, and have been associated with increased traffic fatalities.  Indeed, why did SDOT choose to put 12’ lanes in a re-channelization project that had safety as its main goal? It’s a mystery. In any case, if these lanes were reduced to 10 feet with a simple paint job, there would be 6 extra feet of right of way in the phase 1 zone. Sounds like a bike lane to me.

Further analysis of the traffic safety data from Phase I of the Rainier project also backs up Kidde’s suspicion about the 12-foot lanes. Andres Salomon writes in the Urbanist that speeding really hasn’t gone down as much as it should have. So not only should Phase II aim to fix this oversight by making the travel lanes skinnier (bike lanes are a great way to do this), but that safer design should be extended into Phase I as well.

Ultimately, Rainier Ave bike lanes need to reach downtown. People should be able to hop on a $1 bike share bike to get between business districts in the valley or to get to work in our city’s biggest job center downtown. And they shouldn’t have to risk bodily harm or traverse steep unnecessary hills to do so.

Of course, building bike lanes on Rainier Ave will tap into much more difficult conversations about gentrification in Rainier Valley, where property values and rents are spiking through the roof even without hardly any quality bike infrastructure. During her primary campaign, Nikkita Oliver told Seattle Bike Blog she would have supported bike lanes on Rainier Ave, but urged people to focus on equity issues that could come with them:

As a project like this unfolds, I would also want to consider:

One idea she stressed often in her campaign was expanding bike education to help increase access to bike culture. I would add that new bike share services in Rainier Valley also provide a new point of affordable access to more people.

But when people are fighting to help themselves and other members of the community avoid what is essentially economic eviction, bike lanes are not often at the top of the list of needs from the city. The commodification of homes is a ruthless force, and communities of color are at particular risk of displacement. Even though biking can be a more affordable way to get around, bike lanes can also make a neighborhood more marketable.

On the other hand, preserving a dangerous street design that injures people at an alarming rate, contributes to poor air quality and discourages exercise is a terrible way to maintain affordability. And as we’re seeing, home prices and rents are soaring without any help from bike lanes.

On a larger scale, the same problem can be said for major investments like Link light rail, which certainly made Rainier Valley more marketable and accessible. How can the city make sure new investments in a neighborhood actually improve life for all people already living there rather than helping the housing market push people out? One solution for transit is to build affordable housing as part of transit-oriented development around stations. What affordability tools can we use to accompany bike lanes?

It’s criminal that our city is failing to build enough homes and invest in public housing at the rate needed to maintain affordability so existing communities are not displaced as the city grows. To a lesser extent, the city’s longstanding and ongoing failure to invest in safe and comfortable bike lanes and trails in Rainier Valley at a level comparable to wealthier and whiter neighborhoods north of the Ship Canal is also terrible and unjust. These are not equal issues. A community continuing to exist is a vastly bigger issue than a bike lane. But both issues are real.

I certainly don’t have the answer for how to link the fight against displacement to the movement for safer streets and bike transportation, but I know we need both. People who see bike lanes as signs of gentrification are not wrong. People who see bike lanes as a way to improve traffic safety and help more people access to healthy and affordable transportation are also not wrong. And I know many people are already involved in both efforts. Because the status quo is working against both causes.

Founder and Editor of Seattle Bike Blog.
View all posts by Tom Fucoloro →
This entry was posted in news and tagged rainier ave, rainier valley. Bookmark the permalink.