Concept image facing west from the I-90 Trail at 23rd Ave. The bike cage is located behind the station name.

The design for Judkins Park Station is getting closer to final, and Sound Transit wants feedback from people who bike.

So get to their open house 5 – 7 p.m. Tuesday (tomorrow) at the nearby Northwest African American Museum.

With the I-90 Trail essentially leading straight into the station, biking will be one of the easiest ways to get to Judkins Park Station when it opens in 2023. The location is set up to work well, but the devil is in the details. Will there be enough secure bike parking? Will the west sidewalk design keep trail users separate from people coming to and from the station or waiting for the 48 bus? Will it be easy and direct for people to bring their bikes on the train?

And those issues are just about 23rd Ave. There will also be an entrance under I-90 on Rainier Ave where the current freeway bus stops are. As much potential as the I-90 Trail holds for bike access to the station, safer bike connections on Rainier Ave could be even more important.

Mayor Ed Murray’s proposed 2017-18 budget includes funding for a multimodal corridor project on Rainer Ave and Jackson St in coming years (and the Council is looking into speeding up the Accessible Mt Baker project, which could be a vital part of a safer Rainer). Coupled with Sound Transit investments to improve access to Judkins Park Station, the potential here is enormous. But it will take partnerships and cooperation between SDOT, WSDOT, Sound Transit and King County Metro to make it happen.

But these agencies don’t really have a choice. Today, walking and biking to the freeway bus stops is pretty miserable and dangerous: 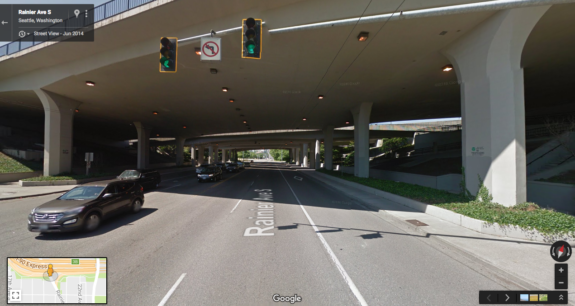 The station area today on Rainer. Six lanes, no bike lanes and no crosswalk directly to the southbound bus stop (so people often just make a run for it).

This must change as soon as possible. Demand for transit access in the area is only growing. And as the only reasonably flat route to the city center, Rainier Ave is the single biggest barrier to biking in much of SE Seattle. Light rail arriving in the area is just one more big reason to address these barriers.

The more people in the neighborhood who feel comfortable walking, biking or taking transit to this station, the more people will have access to jobs and businesses along the East Link line. This project is not just about building a train, it’s about connecting homes, jobs and community. We have to get this right.

More details about the open house:

Sound Transit has reached an important milestone! Plans for the Judkins Park Station are in the final design phase. This open house is your opportunity to review current designs, meet the East Link project team and learn about upcoming construction.