Building a strong, inclusive community for safe streets is the future of bike advocacy 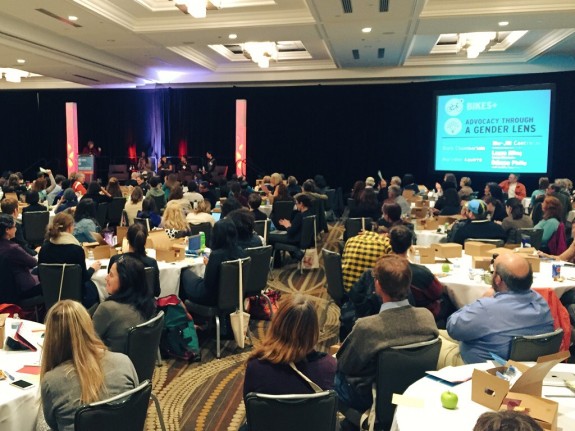 Seattle Bike Blog made its first ever trip to the National Bike Summit and Women Bike Forum last week. The theme “Bikes+” was meant to explore cycling as part of the equation to make places better for many reasons, helping to solve a wide variety of problems.

Working only for more biking as its own end goal is not a complete strategy, and efforts that don’t create a wide coalition are doomed. 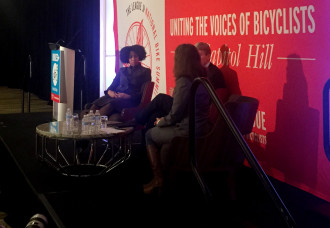 For example, how do bikes play a role in gentrification? Biking and infrastructure changes like bike lanes can correct a great injustice: Low-income areas are more likely to have dangerous streets and have been historically left out of bike improvements.

When Dr. Aletha Maybank from New York City’s Department of Health was tasked with helping a handful of lower-income Brooklyn neighborhoods with higher rates of obesity get more physically active, the lack of bike lanes in the neighborhood was glaring. But when she began speaking with residents about bike lanes, she heard two essentially opposite reactions:

“You have to recognize that white people on bikes showing up in their neighborhood is a sign of gentrification,” she said. Rather than running away from this concept, it’s vital to acknowledge people’s feelings about bikes and have sometimes difficult discussions.

Actual bike use is highest among the lowest income bracket and a recent national survey found black people are essentially as likely to bike frequently as white people:

From the US Bicycling Participation Benchmarking Report from PeopleForBikes

But pointing to a chart and telling people their perceptions about bicycling are wrong is a terrible way to build a strong biking community. Bike advocacy is often very white, and the talking points in favor of bike infrastructure often come from a white lens. Building community is about listening to each other, even people saying things you don’t want to hear.

Adonia Lugo created a great report back in 2012 through a series of interviews with community leaders in Rainier Valley asking them their opinions and feelings about bicycling. Dubbed the Seattle Bike Justice Project, the report is an anonymous insight into the various perspectives on bicycling people in the area have.

While most people she interviewed were in favor of more bike lanes, several of them also saw bicycling and bike lanes as coming from a place of privilege. Many also see “bicyclists” as bike racers or people who are hardcore into bicycling (bike suits, long-distance commuting, etc).

Maybank, approaching the lack of bike lanes in her target Brooklyn neighborhoods, built on her public health relationships with groups in the neighborhoods to talk with community members about their thoughts on bicycling. They also gave community members the opportunity to take the lead on designing where bike lanes should go to create a network that reflects the desires of community members who who participated. So rather than the Department of Transportation laying a bike plan on top of their neighborhood, neighbors gave them their own bike lane plan.

Bikes can’t single-handedly create or stop gentrification and skyrocketing rents. But bikes can be a great tool for building community. Safe streets and low-cost transportation options can be a great way to help maintain affordability. Biking should be for everyone, and the most powerful calls for safe streets come from the grassroots.

The good news is that these concepts are not new in Seattle. Seattle Neighborhood Greenways and Cascade Bicycle Club are at their best when they help build strong local safe streets groups led by and working with a wide variety of neighborhood leaders and organizations. For example, the community building work of Rainier Valley Greenways has been vital in building support proposed safety changes on Rainier Ave.

The ability to trust the DOT is vital

Of course, it’s a lot easier to build community around a goal like “safe streets” than around street design details drenched in wonky terms (“road rechannelization” or “protected bike lane” or “rectangular rapid flashing beacon”). But when your DOT consistently disappoints in its delivery of safe streets projects, advocates are forced to be very specific about their requests.

But when your traffic engineers are well-versed in modern safe streets designs and have the political cover to pursue them, advocates are empowered to speak in much broader terms that reach beyond infrastructure types and speak more to the end goals we want to see as a community. We all want streets that are safer to walk across where fewer or no people are seriously injured or killed. We want efficient transit and vibrant business districts. We want the choice to comfortably walk, bike, drive or take transit depending on which option works best for each trip we make.

This came up in an excellent panel featuring traffic engineers Rock Miller (Stantec) and Bill Schultheiss (Toole Design Group), moderated by Samantha Ollinger (BikeSD). The panel was about how advocates can help politely push their community’s traffic engineers to branch out from (dangerous) American road engineering standards. These standards have historically been more focused on moving motor vehicles than helping people biking and walking stay safe and move comfortably.

Seattle’s DOT has taken a leading role in designing modern bike facilities in recent years, and the traffic engineering panel was a great reminder of how good we have it with people like City Traffic Engineer Dongho Chang leading the way. When people say, “Rainier Ave needs to be safer for people walking across the street,” Chang and the crew at SDOT not only know how to make it happen, they want to make it happen. In the U.S., that is surprisingly rare.

So the new Seattle bike advocacy paradigm is (or should be) focused on community building, bringing more and more people into the movement and partnering to connect bicycling with other movements for a just, safe and vibrant city. Biking is not separate from the places bike lanes go through. People biking are not separate from the people who live, work and play there. The more bike advocates can invite more people to help be leaders in the safe streets movement, the stronger the grassroots demand for safe streets is going to be.

5 Responses to Building a strong, inclusive community for safe streets is the future of bike advocacy